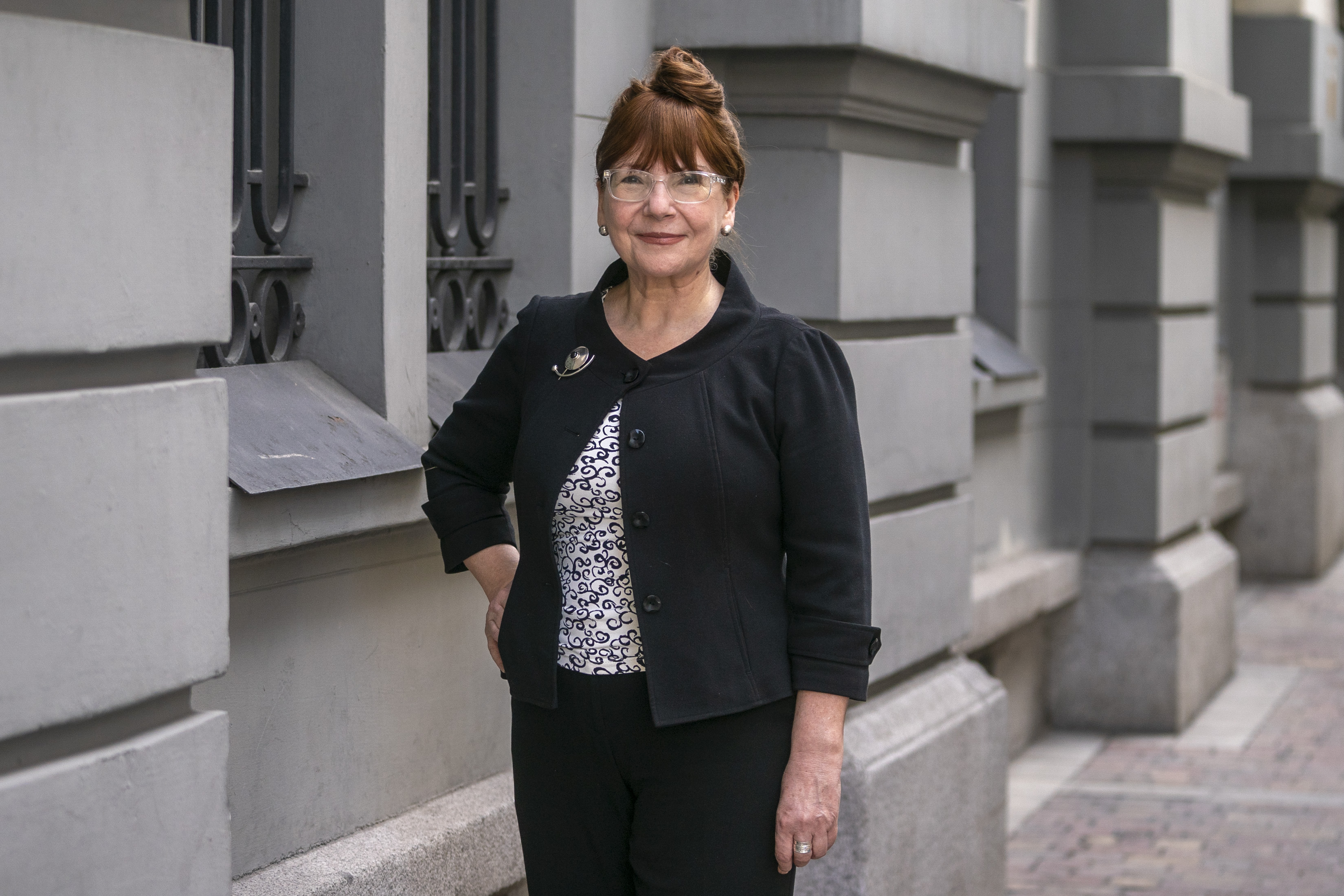 Adriana Ocampo, responsible for New Frontiers Program from NASARemember that his curiosity for science has always been present in his life. When she was a child she would go up on the roof with her dog to see what they could see in the sky. That curiosity continued to grow and as soon as he contemplated the arrival of human beings on the Moon in 1969, it was clear to him that he wanted to be part of the team that had managed to visit that place. When he was young, Ocampo (66 years old, Barranquilla, Colombia) immigrated to the United States, and the first thing he did when he got on the plane was to ask where NASA was. Shortly after arriving, she began volunteering there and that place would soon become what she defines as her second home. Since that first contact, he has not stopped working on numerous projects and has been responsible for some very relevant, such as New Horizons, mission that explored Pluto and its moons, and Juno, that Jupiter analyzes.

The researcher of Asturian origin has recently visited Madrid, invited by the US Embassy, ​​to present the mission Lucy, which starts on October 16. The project will analyze a main belt asteroid, located between the orbits of Jupiter and Mars, and seven Trojans, bodies that follow or lead Jupiter in its orbit around the Sun. The duration of this great unmanned trip is estimated at 12 years, and it includes a plaque with inspiring messages from poets and artists, as a time capsule for “the next humans,” explains the researcher. In this mission the Institute of Space Sciences and Technologies of Asturias (ICTEA), which has been in charge of storing 22 telescopes with which it is expected to observe an unprecedented astronomical event: a star will face today with one of the mission’s Trojans (Polymele) and the shadow it produces will be reflected in Spain. With these instruments they will be able to determine the size of the body and thus help with the project.

Question. What do you expect to know with this mission?

Answer. We want to know how the giant planets were formed. Jupiter, Saturn, Uranus and Neptune are thought to have migrated on their trajectory, that where we find them orbiting today is not where they originally formed. We want to understand how that happened, how their orbits have changed. Trojan asteroids are the remnants of that formation process. We think that perhaps studying the Trojan asteroids is like having x-rays and we are going to be able to see the nuclei of the giant planets, because they are the vestiges of the planetary formation of the Solar System.

P. Asteroids have been studied before. Why is it so important to study Trojan asteroids in particular?

R. Trojan asteroids will not only help us determine the correlation between the Kuiper belt and other objects and asteroids, an issue that we have been observing since 2015. They will also help us in the correlation with the chronology.

The Trojan asteroids on its surface are thought to have been transformed by the water molecule. With the mission Lucy We want to identify the composition of the soil of these asteroids, to know if they have been rehydrated and how they have been transformed. In addition, we will look at the diversity of the composition that we can find and the organic material that we know that some of these Trojan asteroids have. For life to occur as we know it, we need three key ingredients: liquid water, organic material and an energy source, which in the case of the Solar System is the Sun. If these asteroids contain organic material and material that has been hydrated by the water molecule, can help us to decipher what life could be like outside our planet. Studying that correlation of all these asteroid families we are going to really decipher the history of our Solar System, especially the planetary history.

P. When will the first data begin to be known?

R. The mission Lucy It has a trajectory that we call opportunistic, that is, we are going to use a single spacecraft to, with the same trajectory, visit eight worlds. The first one we’re going to go to in 2025 is an asteroid called Donaldjohanson. Donald Johanson is the one who discovered the Lucy fossil, which is why the mission bears this name. Just as Lucy has taught us so much about our origins as a species, we hope that the mission Lucy also teach us about our planetary origins.

P. So in four years, when that asteroid is reached, that is when the first data will begin to be obtained.

Also Read  'It has our energy, our story': asakaa, the vibrant rap scene in Ghana | Rap

R. That’s how it is. The extraordinary thing about this opportunistic trajectory is that it will pass through the Earth three times, using the gravitational field of our planet to accelerate it and redirect it to fly over the Trojan asteroids. That way you use less fuel.

P. A part of the project has been developed during the pandemic. What has it been like to work on a space mission in the middle of such an exceptional situation?

R. The mission Lucy broke all records. It is the only one that has been built under a pandemic. At NASA we are used to having very big challenges, everything we do is for the first time. But, at the same time, building in a pandemic required developing new methodologies. There was something we called 6-15, which was our mantra: being six feet [unos dos metros], for no more than 15 minutes. Usually one thinks that it will take much longer to build the ship – under these circumstances – but we were under the pressure of the calendar. The team did something extraordinary: the construction of the spacecraft that would have taken nine months was done in six and a half months. The methodologies used were so effective that we are going to do what is called lessons learned [lecciones aprendidas]: what did we learn from this so that the Lucy I showed it to other missions that are under construction. For example, Psyche, which will go a metallic world o Europa Clipper, which is going to explore one of Jupiter’s moons that is also thought to have an ocean, organic material, liquid water, etc.

P. What has been the recent mission that has changed the vision of the Solar System the most?

R. We learn so much from each mission that we always come up with more questions than answers. But I think recently the mission New Horizons it has been extraordinary. This mission went to a place never before explored, to the borderlines of the Solar System, where it explored Pluto and its moons. It has really changed the perspective of our Solar System. It’s what made us focus on that we are more than planets, and we have all these other objects in our Solar System that make us richer and more complex. Therefore, I think that New HorizonsIn recent times, it has been the mission that has completely changed what we think of the Solar System.

Also Read  NY will receive the largest transfer of funds in 100 years to modernize roads, bridges and the transportation system

P. You were responsible for this mission, what memories do you have of it?

R. It was a long-term mission, lasting nine and a half years, where we had great challenges. But the extraordinary thing is that we had only one chance: either we got it right or we failed altogether. The pressure was a lot. The team was very diverse and many women took leadership. Many people from the team of Lucy they also worked on the project New Horizons. Sometimes you think how is it that NASA has been so successful, relatively? It all has to do with the team, with the people, and that thirst to provide knowledge.

P. Throughout history planets, the Moon, asteroids and now Trojans have been explored. Do you think it is possible, if you continue researching like this, that life is found outside of Earth?

R. The question of whether we are alone in the universe is part of NASA’s mission. More than 5,000 exoplanets have already been discovered, planets that are orbiting a star. That’s within our galaxy, and we know that there are billions of galaxies in the universe. The chances are high that the conditions that gave rise to life, as we know it, have been replicated. Statistically they are potentially high. Now we have been learning what life niches are and we have found those conditions even within our Solar System. With Perseverance, which is capturing on Mars and extracting those samples that are going to be returned to Earth, I would not be surprised if we might find a fossil there, an encirclement of past life. I would not be surprised if water could be found on the mission to Europe. I think we are in the golden age of space exploration and we are really very fortunate to be living in it because we are going to be surprised with what we have been exploring with these space missions. The next generations are going to have a great legacy.