SALT LAKE CITY — As the Mavericks and Jazz traded punches down the stretch of their Friday night game, one that featured eight lead changes and nine ties, the Vivint Arena crowd roared and groaned with enthusiasm and attention Dallas hadn’t recently faced on the road .

A playoff-caliber atmosphere about six weeks early, no doubt.

The Mavericks hope to return to Vivint Arena this season — if they make one at all — will come at least three games into the playoffs, a sign they’ve clinched home-court advantage in what’s on pace to be a No. 4 vs. No. 5 first-round matchup with the Jazz.

Their 114-109 loss Friday night, however, did them no favors in the pursuit.

Luka Doncic led the Mavericks’ first game out of the All-Star break with 23 points, 11 assists and seven rebounds in 35 minutes, while center Dwight Powell and new trade additions Spencer Dinwiddie and Davis Bertans added a combined 59 points and 12 rebounds in support.

But the Mavericks couldn’t maintain their one-possession lead in the last 3:30 as three-time Defensive Player of the Year Rudy Gobert slowed Doncic down the stretch and the Jazz closed on a 9-2 run.

“I like the matchup,” Doncic said of Gobert. “I think twice I got fouled, but I know the ref. I won’t call a foul. … But I thought I got fouled, and that’s it. We got the matches we wanted.”

The Mavericks’ first game in eight days featured home-court implications as No. 4 Utah entered the night 1.5 games ahead of them at No. 5, but Dallas couldn’t capitalize on the rest to narrow the gap in their push for a top -four seeds for the first time since the 2011 championship season.

The Mavericks instead were to land in San Francisco late Friday night — ahead of Sunday’s matchup against the Warriors — 2.5 games back with 22 regular-season games remaining.

In the second half, Doncic often matched up with Gobert guarding him one on one. A couple times, Doncic won the battle, including a nifty jumper with 3:46 remaining and then a stepback 3-pointer on the ensuing possession.

But the Mavericks missed their next seven field-goal attempts, including two 3-pointers and two layup attempts — one blocked by Gobert — from Doncic.

“They were going to switch and hope that Gobert kept him in front or could get away with Luka taking a tough shot or something like that,” coach Jason Kidd said. “I thought Luka did the right thing. I drove him. I’ve got to basketball. Was there a foul or not? There was no call. But you look at the shots he got — two of the 3s down the stretch were open.

“He got good looks, but our defense has to be better, and the zone wasn’t very good for us today.”

Defense against the Jazz’s All-Star duo in Donovan Mitchell (33 points) and Gobert (14 points, 17 rebounds) wasn’t the only aspect to hamper the Mavericks’ push to win their seventh game in their last eight tries.

Doncic also jawed with a fan sitting courtside who he said was “was talking very bad.”

“I just said, ‘Thank you for paying for watching me,’ and that’s it,” Doncic said. “Nothing else. That’s going to be my phrase for every game now if somebody talks to me.”

He might get to try it again in the same arena come playoff time.

Though the same final result as their first matchup in Utah, the Mavericks’ effort hardly looked similar.

In that 120-116 loss to the Jazz on Christmas night, Dallas played without Doncic, Reggie Bullock, Maxi Kleber, Tim Hardaway Jr. and a handful of other rotation players amid their team-wide COVID-19 outbreak.

Five of the six players who came off the bench were signed to 10-day contracts that week as COVID-19 replacements and the other, Moses Brown, has since been waived.

The loss then dropped the Mavericks’ record to 15-17, but the team sensed potential for a turnaround with a fully healthy lineup.

Their chance for a full-circle confirmation fell a couple of field goals and — in Doncic’s view — a few questionable no-calls short Friday. 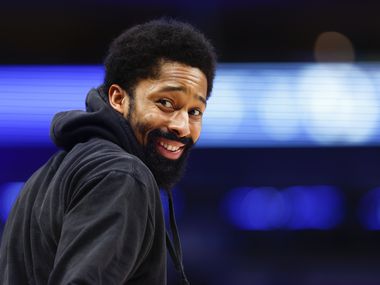