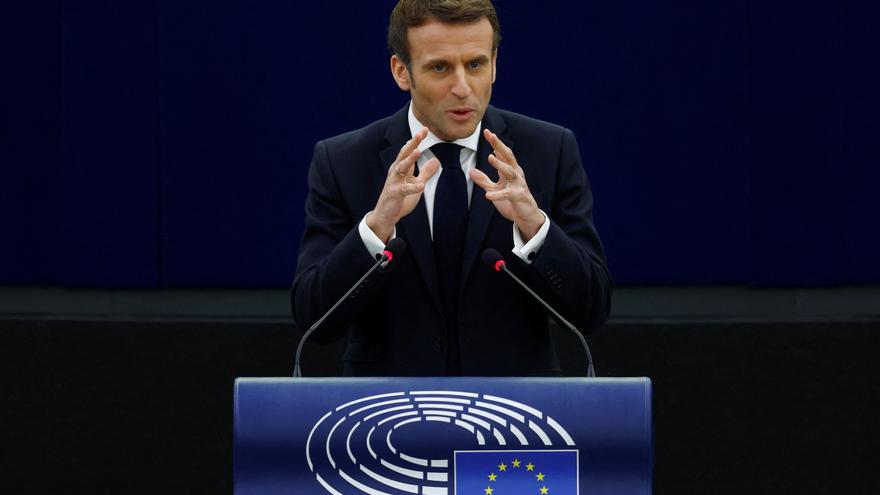 The President of France, Emmanuel Macron, unveiled this Wednesday before the full of European Parliament its priorities for Europe as rotating presidency of the EU and among his first proposals he has mentioned the more explicit inclusion of the protection of the environment and the inclusion of the right to abortion on the European charter of fundamental rights. “Twenty years after the proclamation of our charter, which has enshrined the Abolition of the death penalty throughout the Union, I would like to be more explicit about the protection of the environment or the recognition of the right to abortion”, he claimed, promising a half-yearly European presidency based on the promotion of values.

According to Macron, who faces presidential elections in his country in April, the European construction has managed to keep its promises during these last decades -of democracy, progress and peace– but the current turmoil and the rise of authoritarianism is altering these three promises, so it is time to refound them. “The French presidency will be a presidency that promotes the values ​​that make us what we are and that, by dint of taking them for granted, have ended up weakening in recent years,” he warned, presenting himself as the generation – he himself was born in 1977 – which has rediscovered the precariousness of the rule of law and democratic values.

During his speech before the plenary session, which politically marks the beginning of his presidency, the French Liberal has warned that there are voices that have attacked the founding texts, agreed by all the Member States in their accession, in an attempt that can weaken the foundations of Europe. Faced with this attack, he warned that “the end of the rule of law would mean arbitrariness, a return to authoritarian regimes against our history.” It is, he added, an “ideological battle” that “various authoritarian powers are waging on our borders and that is returning in many of our countries.”

In this sense, he has insisted that the idea that the rule of law is “an invention of Brussels” should not be allowed to take hold, a discourse present in some countries although he has not explicitly mentioned Hungary or Poland. “The rule of law is our treasure: what needs to be done is to convince again all those who have distanced themselves from it”, he defended. The French president has also guaranteed that they will continue to fight against attempts at foreign interference and has supported the right of legislative initiative for Parliament .

A good part of the intervention, lasting half an hour, has also beeno dedicated to European solidarity, climate protection, the digital revolution, which will be the second great challenge of this century, the reform of the Schengen free movement area, the need to negotiate a new partnership with the African continent and the security of Europe. Macron has also referred to the increase in tensions with Russia and has defended a frank and demanding dialogue with Moscow, with whom he is committed to continuing to negotiate within the framework of the normady format in which Germany also participates to find solutions to the most pressing problem that is the conflict in Ukraine.

“Neither the reflections of the past, nor the return to nationalism, nor the dissolution of our identities will be the answers to this new world. But our ability to invent a possible dream, to make it tangible, to make it a reality, to make it useful to our fellow citizens is the key to our success. We have the strength. We have the means. That’s why I trust us”, he concluded.