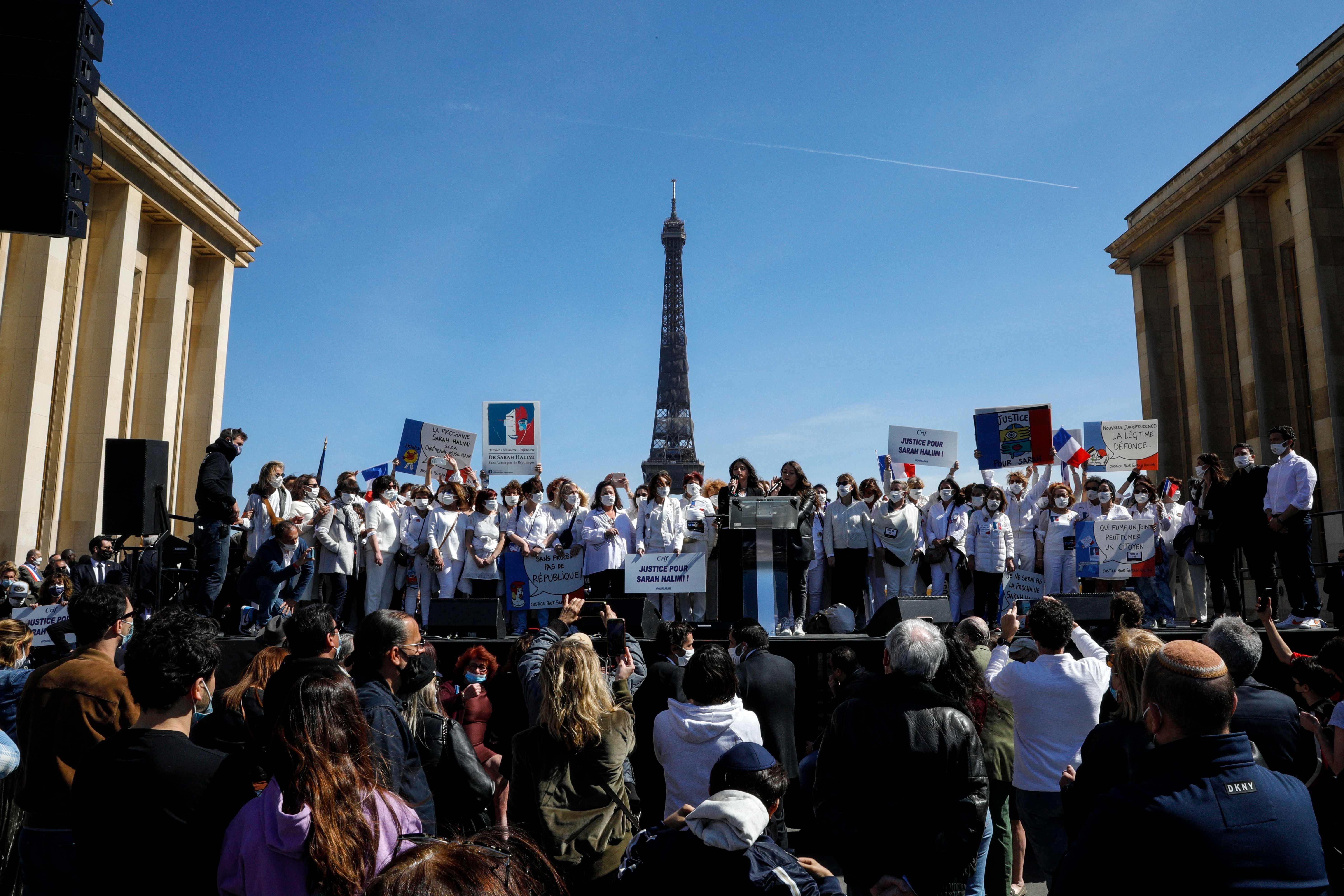 The case horrified France and scared many Jews in this country. In the early morning of April 4, 2017, a Muslim man entered his Jewish neighbor’s apartment in Paris and killed her by defending her. Ten days ago, the Court of Cassation (the French Supreme Court) declared the defendant “criminally irresponsible” considering that his “discernment” was “abolished” due to drug use. Thousands of people protested yesterday in Paris and other cities against the decision. The president, Emmanuel Macron, promises to change the legislation to toughen it.

Horror places are sometimes nondescript. The Parisian Rue de Vaucouleurs, where Sarah Halimi lived, is an example. Low circulation, a pharmacy, a second-hand bookstore, a health center, a modern building with a backyard. It was in this courtyard that at dawn on April 4, 2017, the police found the body of Halimi, a 65-year-old retired daycare director. Shortly before, Kobili Traoré, 27, had entered her apartment to beat her up and finally throw her off the balcony while shouting “Allahu Akbar” and “I have killed Satan.”

The crime opened a legal struggle that has lasted four years. The debate was, first, on whether it was appropriate to qualify the act as anti-Semitic. At first, the investigating judge charged Traoré with murder; later he ended up adding the aggravating circumstance of anti-Semitism.

The second debate was legal and also medical. It was a matter of clarifying whether the accused was in full possession of his mental faculties when he murdered Halimi. Article 122.1 of the French penal code establishes: “The person who is affected, at the time of the events, by a psychic or neuropsychic disturbance that has abolished his discernment or control of his actions is not criminally responsible.”

The psychiatric reports agreed that Traoré was found to kill Halimi in the middle of an “acute delusional outburst (…) induced by cannabis use.” The first ruling concluded that, due to the voluntary consumption of drugs, one could speak not of “abolition” of discernment, but only of “alteration” and, therefore, the accused could be tried. The other rulings concluded that cannabis had been a factor, but not the only one, and stated that, in effect, there was “abolition of discernment”.

On April 14, the Court of Cassation confirmed the decision of lower courts and confirmed that there will be no trial against Traoré, who is being held in a psychiatric hospital. In a statement, he explained that irresponsibility is independent of the origin of the mental disorder: it does not matter if it is due to drug use or for another cause. Thus the case was closed in court. And so another controversy broke out that may lead to a legislative change.

“The meaning of the law, in France, is that when you are crazy, when you are in a state of madness, you are not responsible,” explains Patrice Spinosi, Traoré’s lawyer, by phone. “What the Court of Cassation says is that the crime was committed under a delirious outburst. It is not someone who has smoked too much and loses control, but someone who has a pathology, which is not just cannabis drunkenness: under the blow of the delusional outburst, which is a psychotic problem, there is no longer discernment, one does not know what What he does is out of his mind ”, argues the lawyer. “The other thing the judges say is that when Mr. Traoré smoked, he was not aware that this could cause a delusional outburst.”

“[Traoré] He is not crazy: he played crazy ”, says Francis Kalifat, president of the representative council of Jewish institutions in France. “It is clear that it was an anti-Semitic crime that he made up as madness.” According to Kalifat, the Supreme Court’s decision “is a bad sign, and not only for the Jews.” “When someone takes drugs voluntarily”, he adds, “and commits a crime, the drug becomes an excuse and mitigating factor, while if one has a car accident, the drug is an aggravating factor.”

At the Paris demonstration, in the Trocadero square, to demand justice for Sarah Halimi, this was a recurring argument. On a poster, you could see a drawing of a cannabis leaf with the words: “Permission to kill.” Another read: “Jewish lives matter”, An allusion to Black Lives Matter, the movement against impunity for racist violence in the United States. “In the United States, Justice heard the popular demand. Not in France, ”said Chérif, the man who carried this poster. “I am not Jewish,” he explained, “but we cannot be indifferent.”

Justice Minister Éric Dupond-Moretti announced on Sunday that he will present a bill to make it more difficult to protect oneself from criminal irresponsibility. “In the Republic, we do not judge sick or undiscerning citizens: we treat them,” Macron told the newspaper this week. Le Figaro. “But deciding to take drugs and then go ‘crazy’ should not, in my opinion, abolish criminal responsibility.”

More than a decade of anti-Semitic attacks in France

Sarah Halimi’s death in 2017, beaten and defenestrated by Kobili Traoré, a neighbor of hers in Paris, was the 10th anti-Semitic murder in France since 2006. That year, 23-year-old Ilan Halimi, unrelated to Sarah, was abducted and tortured until death. To this crime was added, six years later, the massacre of three children and an adult in a Toulouse school, and in 2015 the murder of four people in the Hyper Cacher Jewish supermarket in Paris, two days after the attack on ‘Charlie Hebdo ‘. After the Court of Cassation in France closed the avenues to try Traoré, the lawyers for Sarah Halimi’s family have announced that they will go to the Israeli court.