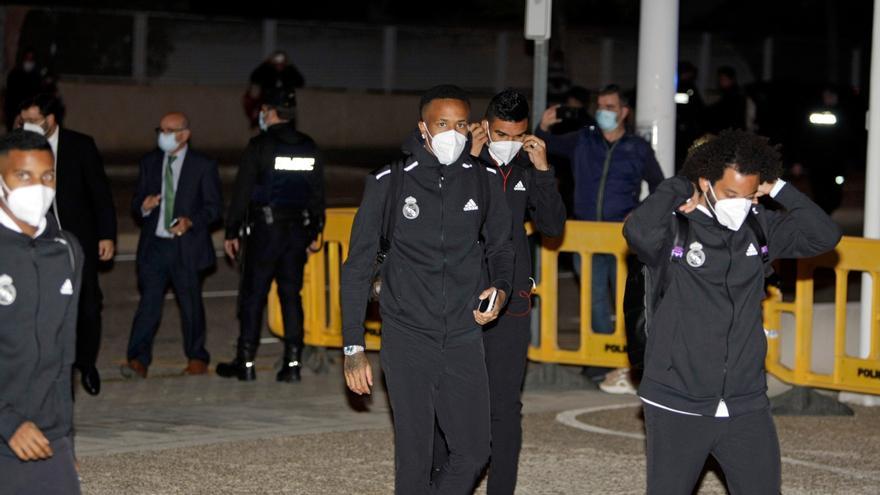 The Madrid expedition landed in Elche around eight in the afternoon. Players, technical and medical staff, managers, traveled from the capital of Spain on a private charter flight. Upon arrival at the Miguel Hernández Elche-Alicante airport, the surprise was for some travelers who saw the team arrive at the venue and get on the bus that would later transfer them to the hotel, located a few kilometers away, in the Elche Industrial estate, in the Elche district of Torrellano.

After eight thirty at night the team arrived at Port Elx. There, dozens of fans, a hundred or so, had been waiting for at least an hour. Their idols had arrived and were ready to give them their support and encourage them for tomorrow’s game against Elche.

As the clash against the franjiverdes is the first of the day (14 hours), the expedition was in a hurry. And it showed. In just a few minutes, all the members of the Madrid club were inside the hotel. Dinner awaited them and, later, the rest before a game, the necessary concentration, the chat with the teammates, the last indications of the coach …

The moment of greatest jubilation was when the coach door opened. The fans were able to see each of the 23 footballers summoned by Carlo Ancelotti get off the bus. Along with them, the members of the coaching staff, led by Carlo Ancelotti. And also some manager like Roberto Carlos, ambassador of the white team, and Emilio Butragueño, who was the only one who stopped to greet the fans present. The players made gestures of thanks and waved to those present, but they were quick to enter the hotel. The former soccer player and now director of Institutional Relations signed some t-shirts and posters of those present, sharing a brief chat with some of them. The moment was unique, but it happened fleetingly.

The fans missed the presence of Real Madrid’s top scorer, Karin Benzema, who was not called up due to a minor injury. His non-attendance was a disappointment for many and the main object of comment among the madridistas who were waiting for their team.

The white club has chosen this hotel complex, located just 8 kilometers from the Martínez Valero stadium, because it is far from the city center and thus improves the concentration of its players. Port Elx is the same venue where Luis Enrique’s Spanish team stayed when he played against Croatia on the Elche soccer field. The Madridistas, last season stayed at the Huerto del Cura hotel, one of the usual ones for the white club. Then, the Madrid expedition traveled the same day of the match. The pandemic was in full swing and the crash had to be held without an audience. Today, the fans will be able to enjoy their players on the field.