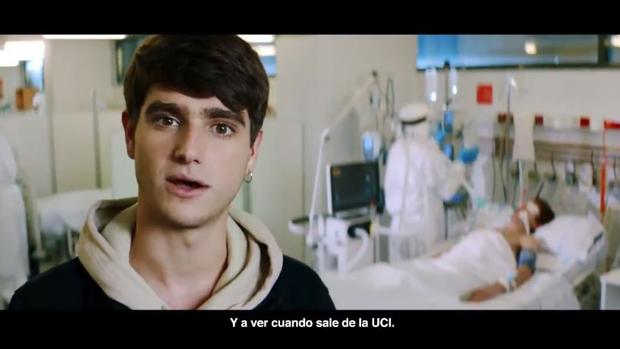 Ads “are tough, but necessary.” This is how Isabel Díaz Ayuso presented the new advertising campaign for keep fighting him Covid-19
. The objective of the initiative, “the most powerful in years”, is to remove the viewer’s conscience and convey the importance of complying with health measures to avoid contagion.

Through some impressive videos – which will be broadcast on all televisions, on social networks frequented by young people and on music sites such as Spotify – the reality of the danger posed by contagions in the immediate environment. The message will also reach the written press, the radio and the streets, around large Metro stations frequented by young people, such as Ciudad Universitaria and Moncloa.

Young people “trapped” in the ICU after their friends skip the quarantine and grandparents who die after having a family reunion without precautions are some of the scenarios that the campaign raises. “All the effort that we have made in the Community of Madrid has paid off, but we have to go much further. It is useless if citizens do not help us and everyone in the private sphere lends a hand, in those corners where administrations cannot be»Diaz Ayuso asked.

▶ ️ Skipping quarantine can end up with your best friend in ICU. #NoTeSaltesLaVida pic.twitter.com/TRvIWzMvwl

During the presentation of the campaign, the president insisted on the need to continue maintaining discipline in compliance with the restrictions on schedules and capacity (meetings of maximum six people), adequate ventilation, the use of a mask and the maintenance of social distance. “If we don’t do it, we are going to lose our freedom in Madrid,” he recalled.

The advertising campaign, which has cost more than 3 million euros, is “necessary” despite the fact that the region has improved its data in recent weeks, with 66 percent fewer infections compared to the September peak. As explained by the Minister of Health, Enrique Ruiz Escudero, Madrid chains seven consecutive weeks of case decline. “Of the 813 cases of average incidence registered at the peak of the pandemic, in mid-September, it has dropped to the current 328,” he said. But, like Díaz Ayuso, he also warned: “We cannot trust ourselves because the virus has not gone away.” The latest advertising campaign attests to this.