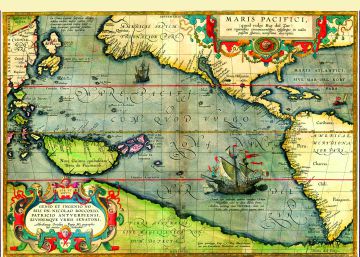 One of the most widely read and translated books of the 16th century was Silva of various lessons (1540) by the Sevillian humanist Pedro Mexía, an encyclopedic work before the appearance of the encyclopedias and that for that very reason belongs to the genre of so-called miscellaneous, a beautiful and vague category where we find Vulgar philosophy (1568), by Juan de Mal Lara; Curious flower garden, (1573) by Antonio de Torquemada, or Universal square of all sciences and arts (1615), by Cristóbal Suárez de Figueroa, among other titles. Silva of various lessons It had 17 Spanish editions before the end of the 16th century and was translated into Italian (1542), French (1552) and English (1571), not to mention the allusions that Montaigne, Cervantes, Shakespeare and Inca Garcilaso dedicated to it. However, Pedro Mexía did not make any reference to the first circumnavigation of the world —a feat accomplished in 1522— and even in the chapter dedicated to the roundness of the Earth he suggested reading Ptolemy, Oroncio, Cleomedes and Juan de Monte Regio. Y Relationship of the first trip around the world (1524), by Antonio Pigafetta? Administrative silence.

In reality, the Magellan-Elcano navigation had little impact in the sixteenth century and even less in the following centuries, to the point that other sailors such as the privateer Francis Drake made much better use of their subsequent voyages around the world. However, the growing interest in the study of trans-Pacific routes and early globalizations – I am thinking of the works of Lothar Knauth, Serge Gruzinski or Bernd Hausberger – in the context of the commemoration of the V Centenary of the Magellan-Elcano trip has led to the creation of World Network of Magellanic Universities (RUMA), Academic association that brings together 24 universities from each of the points of the Magallanes and Elcano route through the five continents.

Led by Juan Marchena Fernández, from the Pablo de Olavide University of Seville, in less than three years the RUMA has held various scientific events in Europe and America, in addition to being commissioned to prepare the academic report that supports the candidacy of the Ruta de Circumnavigation to integrate the list of Unesco World Heritage, which will be presented jointly by the Governments of Spain and Portugal. RUMA had planned an intense program of activities throughout 2020, but the global pandemic sparked RUMA’s first global response to the challenges of the coronavirus.

Indeed, on October 26, an unprecedented academic activity was held: the International Symposium Covid-19 and University, that between eleven in the morning and nine at night Spanish peninsular time summoned researchers from 19 universities, who presented their papers in three different languages ​​(English, Spanish and Portuguese) from nine different countries and throughout 13 time zones. The symposium was broadcast live on the RUMA channel and directed by the universities of Cape Verde, Timor-Leste and Buenos Aires. The Spanish speakers were professors from the University of Seville, University of Cádiz, University of La Laguna, University of Las Palmas, Pablo de Olavide University and Loyola Andalucía University.

Five hundred years after the discovery and navigation of the Strait of Magellan, RUMA held a global symposium that deserves the nickname Magellan.