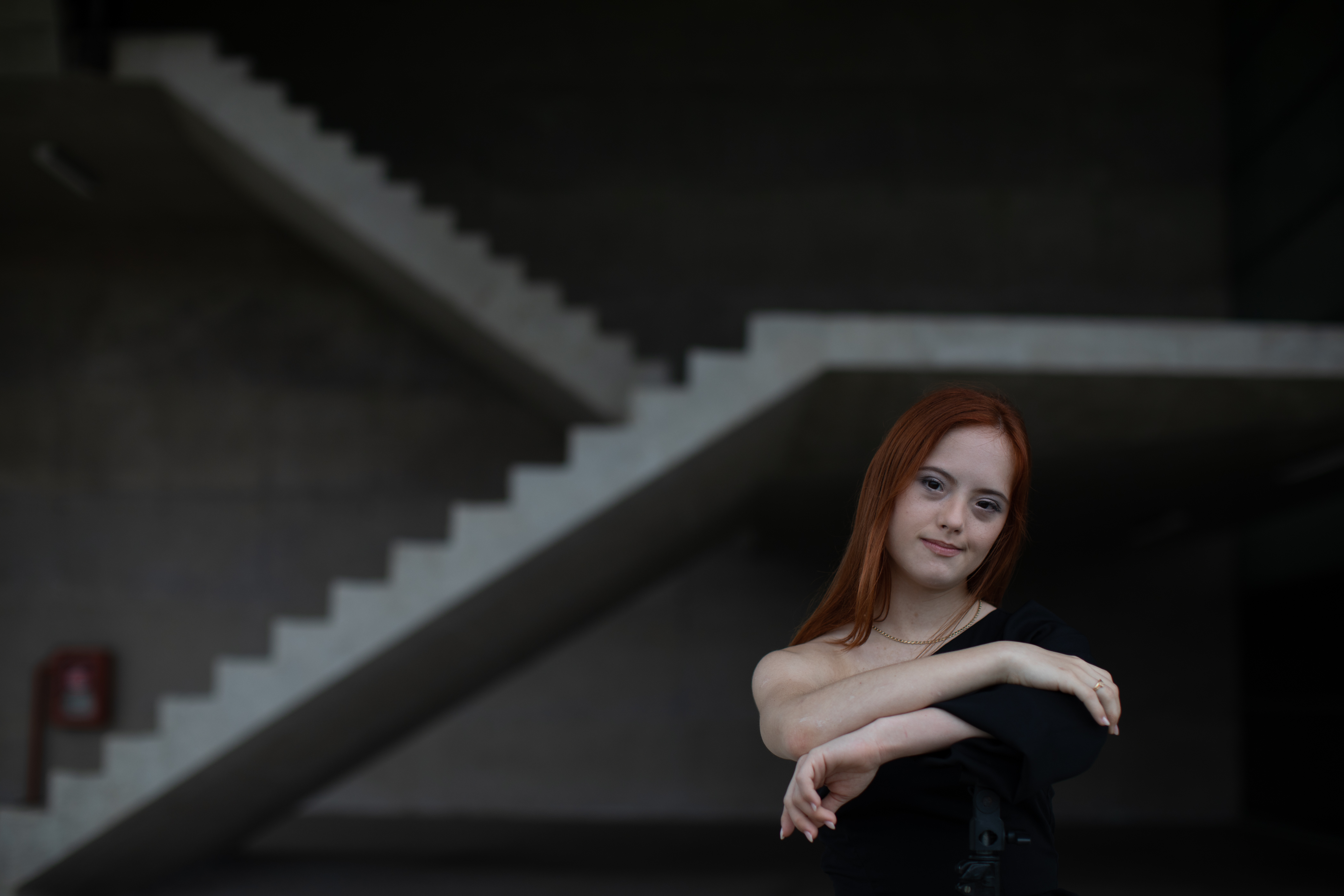 The 19-year-old model Maria Julia de Araújo, does not manage to reach one meter and fifty in height, very far from the standards of the catwalks. He does not have the slender, lean body exhibited by the top models of all the world. He has long straight hair, almond brown eyes, and an easy smile. Even so, Maju [se lee Mallú, en portugués] it has become an international model. She has already shown three fashion weeks, including Milan, and is the new brand ambassador for L’Oréal Paris. The model, who has Down syndrome, has an intense work schedule, but says that so many commitments tire her “just a little.” She meets EL PAÍS next to her mother, Adriana de Araújo, and her sister, Larissa, in the Espacio de las Artes cultural center, south of Rio de Janeiro, the city where she lives with her parents and her two sisters. In front of the photographer of the report, he quickly spreads his shoulders, stretches his back, leaves his mouth ajar and poses for the camera. The three years of profession have accustomed her to the objective. But the world still has to get used to it.

As a child, Maju loved to pretend to be a model. She hung napkins around her waist, which were like the flowy clothes on the catwalks, and made gestures as if she were being photographed. “She thought that the world of fashion would be inaccessible to her,” says her mother, Adriana, 48. In fact, the Rio-born model’s journey has never been easy. She is the youngest of three daughters, her father is a systems analyst and her mother, a chef. Adriana says that she spent her daughter’s childhood and adolescence listening to “no” when she thought about meeting Maju’s desire: “Several times we went to the schools and they told us there were no places left,” she says. So when her daughter expressed her desire to be a model, her mother did not take it seriously.

Things started to change after Maju slipped into a coma from meningitis. When she woke up, after doctors evicted her, she told her mother that she wanted to be a “famous model.” It was the trigger for her mother to run after her daughter’s dream. “At that time, we had serious financial problems,” says Adriana. “The only money I was able to reserve was 200 reais, the tuition for the modeling school. I thought: ‘my daughter deserves it.’ At that time, the mother worked cooking at events. “I used to take my three daughters to work. Maju helped assemble the dishes ”.

Despite the difficulties, the family decided to invest what little they had in training Maju. However, they didn’t know that tuition money was just the tip of an iceberg. Once again, the doors did not open easily. “I threatened to sue the modeling school, which did not want to accept my daughter. There I positioned myself for the first time, ”says Adriana, who today is a consultant and a kind of spokesperson for her daughter, since Maju has difficulty speaking.

The model communicates well through expressions and sign language, which she used to participate in a series made for Instagram, which lasted six months. Her 25-year-old sister Larissa and her mother help her tell her more than 387,000 followers on Instagram the ins and outs and the results of her work. “We also filter the comments,” says Larissa. “There are a lot of hateful comments. Many people say, for example, that they are white and privileged, ”he says.

Maju finished her modeling course in Rio de Janeiro in 2019. However, career opportunities were slow in coming. The model spent a lot of time doing work in exchange for products, instead of money, as many models tend to do at the beginning of their profession. Only when he signed a contract with Mind, an image agency, and not necessarily models, did they start talking about his cache and the jobs became more professional.

Today, Maju practically supports her family. “Maju has brought financial stability with her work,” says her mother. Thanks to her profession, the model has traveled to Italy, Portugal and France. “What I liked the most was Paris, because it’s chic,” he laughs. What country would you like to visit? “China”. And he has many other dreams that he wants to fulfill. “I want to appear on a billboard,” says the model, a sushi and ice cream fan, whose greatest pleasure in her profession is “taking photos and walking the show.”

Her mother insists on pointing out that there are no shortcuts on Maju’s path: “If a person considered normal by society’s standards has to walk 6,000 kilometers to get where they want to go, Maju will have to walk four more times to show that it is capable”. Big modeling agencies don’t want to hire your daughter. “They say that Maju does not have the profile of what customers are looking for,” he says. “The reality is that people with disabilities have always lived socially isolated.”

The rejection of the agencies exposes how the market ignores a huge audience. According to the latest census of the Brazilian Institute of Geography and Statistics, published in 2010, 24% of the Brazilian population has at least one of the disabilities measured by the survey: visual, auditory, motor, and mental or intellectual. There are 46 million Brazilians who declare they have some type of disability. “I often say that people with disabilities are the largest minority there is,” says Ivan Baron, 23, who calls himself an influencer of inclusion and informs his more than 160,000 followers on the subject.

Ivan, who has cerebral palsy, acknowledges that many companies are willing to change. “Brands have started to seek me out and realize that I can also attract consumers with my speech,” he says. “A great achievement was becoming an official ambassador for Spotify, one of the largest music platforms in the world.” However, he explains that there is a big difference between diversity and selective diversity: “There are companies that think that just by raising the LGBTQUIA + flag they are already inclusive.”

Use the term Def Money to talk about brands that are sold as diverse, but do not take diversity as politics. “Like Pink Money, in the case of the LGBTQUIA + community, and Black Money, with the black movement, there is the Def Money, which comes from the word deficient. They are the brands that take advantage of our image, of our bodies, for a few seconds to make us believe that they are inclusive ”, he explains. “They put, for example, someone in a wheelchair to advertise a store that does not have accessibility.”

Therefore, Ivan uses his account on Instagram to convey some concerns to the public and feel represented. “I grew up without any type of representation, I did not see myself represented as a young person with a disability. And when you don’t feel represented, you think you don’t exist ”, says Ivan. Adriana, Maju’s mother, says that her daughter has the same purpose: “Her true mission is to spread the visibility of these people, who are real people.”