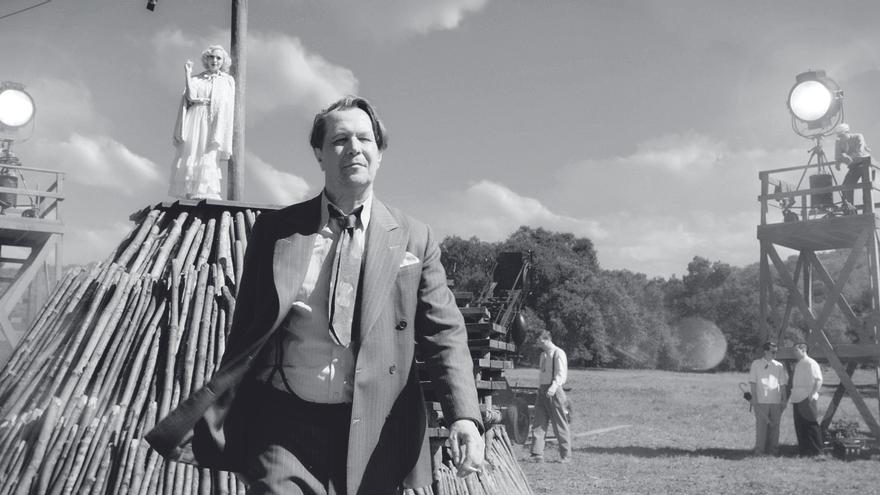 And not only that: Mank, David Fincher’s eleventh feature film, has all the numbers to succeed in the succession of awards shows that will begin in a few weeks and culminate in the Oscars on April 25. Had it been released in any given year, it would be a solid candidate; Doing it in the midst of the pandemic, after titles like West Side Story or Dune have postponed their premiere for several months, makes it the great favorite. Starting tomorrow in theaters in the US – on December 4, it will be incorporated into the Netflix catalog for the whole world – the film approaches the figure of screenwriter Herman J. Mankiewicz (Gary Oldman) during the months he spent writing for the director Orson Welles the first draft of Citizen Kane. The authorship of the text has always been shrouded in controversy, since Welles credited himself as its co-author despite the fact that, some – including the famous critic Pauline Kael in her essay Raising Kane (1971) – claim, his contributions were void.

In any case, Mank focuses less on that controversy than on the circumstances that inspired the script: after being part of Hearst’s inner circle and then finding himself outside of it both because of his drinking problems and his own disenchantment with power, Mankiewicz decided to use the typewriter to get revenge. The pools already predict that Mank, the first film that Fincher has released since Perdida (2014) -in the meantime he created the soap operas House of Cards and Mindhunter-, could achieve as many nominations as Citizen Kane achieved in his day, nine, and in the same categories. If that’s the case, the director would have reason to worry: Mankiewicz and Welles’ script was the only statuette that his predecessor ended up taking home. However, there are reasons that predict Mank a more successful harvest.

The navel of Hollywood

The recent history of the Oscars shows that Hollywood members like to reward films that talk about them. In recent times, three fictions more or less focused on the world of cinema -The Artist, Argo and Birdman- took the most precious statuette and a fourth, La La Land, also held it in his hands for a few seconds, and in any case ended up winning six awards; Once upon a time … in Hollywood, meanwhile, he won two this year. But it is that Mank speaks not only of cinema but, we say, of what is perhaps the most revered and studied film of all that exist, and reproduces not only its narrative structure full of time jumps but also his interest in dark alliances between the press, cinema and the American government of the time.

And in the process, finally, he accurately captures the look and feel of Old Hollywood: its glamor and squalor, its ability to inspire dreams and smash them into a thousand pieces, its endless hierarchies, its corruption and its magic. After a few months in which its very survival remains under threat, the industry is likely to be particularly inclined to honor itself … even if that means reconciling with its last great enemy.

The platform has been trying for years to be the great winner of the Oscar night, but so far its productions have not had it easy. Yes, Rome won three statuettes in 2019, but lost in the premier category, Best Film; And in 2020, despite accumulating 13 of the 45 nominations in the main categories, Netflix returned home with the word failure around its neck, thus confirming the widespread belief that a certain anti-streaming sentiment prevails within the Academy. However, it is more than likely that this attitude has its days numbered. In 2021, after all, voters won’t be tempted to ignore Netflix, mostly because they will have little choice to do so. While the big studios delayed until well into next year the release dates of some of what were to be their big bets in the awards season, the big N will participate in it with at least four titles: Da 5 Bloods, by Spike Lee; The Chicago 7 Trial, by Aaron Sorkin; George Clooney’s The Midnight Sky; and of course Mank, without a doubt the one who would make it easier for academics to vote for Netflix without feeling guilty.

Mank addresses several issues that are relevant today. For one thing, it recalls Hollywood’s efforts to lure people into movie theaters during the Depression years, many decades before the pandemic emptied them again. It also recreates the election campaign for the California government of 1934, which pitted the corrupt Republican Frank Merriam against Upton Sinclair, a socialist writer -something like the Bernie Sanders of his time- who inspired a mixture of terror and hatred among the elites of the country. The film recalls how producers Louis B. Mayer and Irving Thalberg conspired with Hearst to sabotage Sinclair’s campaign by using fake news – ironically, it was Mankiewicz himself who unwittingly gave them the idea; In other words, Fincher portrays a political climate similar to that which has engulfed the United States for some time. It remains to be seen when and how Trump will agree to leave the White House, but for liberals in Hollywood, rewarding Mank would be a way to pat himself on the back for his contribution to the downfall of the still president.

The sound of applause

The American critics are praising Mank roundly, and it is understood for several reasons: the precision with which Fincher mixes the intimate and the epic – he already did it in Zodiac-, the amazing meticulousness with which he recreates the Hollywood of the 30s and the look of the films that were made then, the sophistication with which it pays tribute to some iconic moments of Citizen Kane without falling into mere pastiche … Unlike so many other films about the cinematographic process, Mank also stands at the fair distance, without falling into reverence or explicit satire; portrays the lack of ethics and hypocrisy of the industry but also its capacity to amaze, and wonders if it is legitimate that, to create a great work, the author agrees to betray whoever is necessary and even to the brink of death.

Despite being one of the most respected authors in current American cinema, throughout his career David Fincher has only obtained two Oscar nominations, both in the category of Best Director; none of them provided the statuette. He is considered one of the most abused directors by the Academy, who in 2008 ignored the Zodiac and in 2011 left the social network without the Oscar for Best Film. It is time to make up for those injustices. And, considering that Mank is perhaps his most personal film – the author of the script is his own father, journalist Jack Fincher, who died of cancer in 2003 – surely it would be nice for him if that happened next April 25.