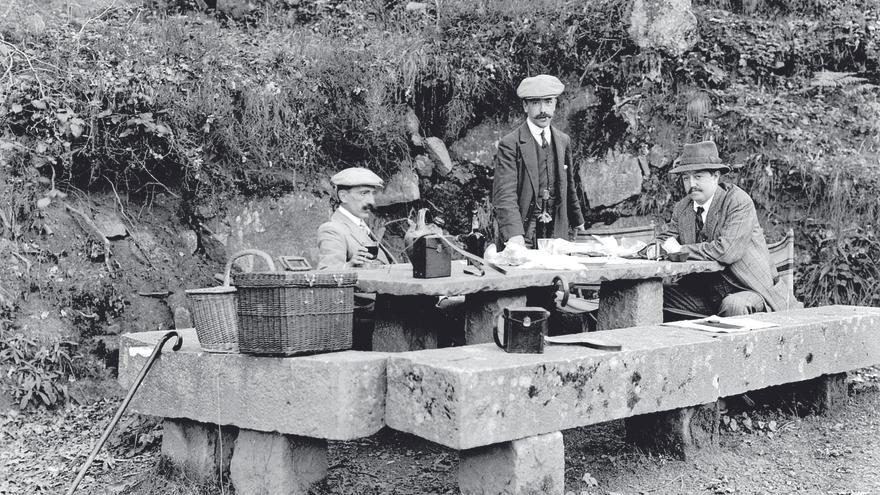 The creation of the Hydrographic Trade Union Confederations (1926) took place in a Spain with a broad agrarian base and strongly impregnated with the regenerationist ideology; and when, after the victorious landing of Al Hoceima, General Primo de Rivera sought the institutionalization of his regime, replacing the Military Directory with a Civil one, which included highly qualified and prestigious specialists, exempt from a political past.

On December 3, 1925, Rafael Benjumea Burín, a brilliant engineer of Roads, Canals and Ports, was appointed count of Guadalhorce (1921) for the regulation of this river. His profession and specialization counted, to the maximum, for his appointment; unequivocal indication of the preferential attention that the Dictator had decided to pay to public works in general, and to hydraulic works in particular.

It seems appropriate to recall that Primo de Rivera’s apologists repeatedly tried to identify him with the “iron surgeon” desired, obviously with another political approach and perspective, by Joaquín Costa. It is noteworthy that not a year elapses, only three months, between the inauguration of Guadalhorce and the promulgation of the Royal Decree of March 5, 1926 that introduced the Hydrographic Trade Union Confederations.

As would happen, a seven-year-old later, with the First National Hydraulic Works Plan (1933), the technical conception of these organizations did not respond, in any way, to improvisation, nor had it been elaborated in a quarter; Quite the contrary, it was the result of the careful and conscientious reflection of another distinguished engineer, professionally forged in the Ebro, Manuel Lorenzo Pardo (1881-1963), whose preparation and notorious worth was well known to the minister.

After a first inconsequential assignment, the Engineer of Roads, Canals and Ports Manuel Lorenzo Pardo was assigned to the Hydraulic Division of the Ebro, cradle of hydraulic regeneration and a leading body in the matter. He belonged to said Division until the promulgation of the aforementioned decree of March 5, 1926. Appointed technical director of the Ebro Hydrographic Trade Union Confederation, his work, he developed an intense activity, with transformation into irrigation, for five years, of 100,000 hectares.

For this reason, he could affirm, in Alicante (February 1933), «… I can only be attributed (preferences) towards the Ebro, and it will be with good reason, because it is not for nothing that I have dedicated the twenty-five years of my active professional life to that problem . But the problem of the Ebro is completely dominated in the essentials …, as a created thing and with which we must count, as an example or as a foundation of method ».

Let’s go back seven years, to January 1926: the harmony between the two outstanding engineers mentioned was early and complete; According to the testimony of Lorenzo Pardo himself, Guadalhorce, a recently launched ministry, called him and «… expressed his wish that, coordinating all the usable elements, irrigators, industrialists, authorities, banks, technicians … he would present a collaboration formula and a project complete rapid execution of what was studied … »The preliminary draft, precise and very elaborate, enthused Guadalhorce; In contrast to this, the result of years of work and entire dedication of Lorenzo Pardo, the decision of the minister, given the extraordinary quality and precision of the required study, to project the approach to the whole of the national territory was very quick, adopted 48 hours before the meeting of the Board of Directors that should approve the decree for the Ebro basin; Thus, the aforementioned specific provision was preceded by a general one that instituted the Hydrographic Trade Union Confederations and opened the way to the creation of others: the Ebro Hydrographic Trade Union Confederation would be followed chronologically by that of Segura.

It is unnecessary to make it more expensive that the new organizations, whose corporatism was evident, were completely in tune with the political designs of the Dictatorship (1923-1930), to the extent that, according to Raymond Carr, the “creations of which the dictatorship was most puffed up were the Hydrographic Trade Union Confederations… ”Hence, with the resignation of Primo de Rivera (1930), criticism of these institutions intensified. However, the worst and final was yet to come, and it occurred with the proclamation of the Second Republic on April 14, 1931.

The actions of the provisional government were immediate, and their immediate objective and privileged scenario, despite its spectacular achievements, was the Ebro Hydrographic Trade Union Confederation, focusing anger and resentment on its technical director, Manuel Lorenzo Pardo, victim of unjust, embarrassing and blushing sectarian persecution: ceased, filed and prosecuted at the initiative of the Minister of Development of the Provisional Government Álvaro de Albornoz, of the Radical-Socialist Party that, founded by Marcelino Domingo (1929), would be a member of the Republican Left (1933).

Fortunately, with more talent and a sense of the State, the Minister of Public Works of the republican-socialist coalition Indalecio Prieto called him, that year 1931, to the Head of the Hydraulic Plans Section and later appointed him director of the Center for Hydrographic Studies (1933), created with “the initial and urgent mission of formulating a national plan for hydraulic works.”

The achievements of the Hydrographic Trade Union Confederations were very uneven from one basin to another, to the extent that in some they did not even exist. As Lorenzo Pardo himself wrote, knowingly, in 1933, the model “was not the complete organization. It also had the serious ailment of inequality, it was due more to local stimuli and personal efforts than to national reasons.

This insufficiency is what the I National Hydraulic Works Plan (1933) tried to remedy, through a joint and total approach, subjecting any possible private or regional interest to the national horizon. The guiding idea, original, at the same time unitary and multifaceted, entailed novelties and changes of capital importance: it began as a well-articulated plan, which transcended the largest basins and contemplated the national horizon; and, from this perspective, it aspired to correct the hydrographic imbalance between the Atlantic and Mediterranean slopes; and, in close connection, to achieve a substantial improvement in agricultural income, as the most productive areas with the greatest export capacity are the worst endowed with water.

Lorenzo Pardo considered that the most suitable area for irrigation, due to its climatic conditions and the experience of its farmers («There the oldest uses, the liveliest traditions, the strongest irrigation institutions, the wisest practices, the greatest and more generalized experience ”), was the Mediterranean: this supposed a Copernican turn with respect to the so-called Gasset Plan (1902), which had marginalized it in favor of the Central Plateau. The 1933 Plan also constituted a serious and successful attempt to overcome the struggle between Civil Engineers and Foresters for the control of water: under the direction of Manuel Lorenzo Pardo, the engineers Clemente Sáenz (Caminos), Ángel Aruestra, appeared as co-authors of the Plan. (Agronomist) and Joaquín Ximénez de Embún (Montes).

Lorenzo Pardo considered that the most suitable area for irrigation, due to its climatic conditions, was the Mediterranean

Master and key piece of the I National Plan of Hydraulic Works was the Plan for the Improvement and Expansion of the Levante Irrigation, which for one reason or another, planned to affect 338,000 hectares (of which, 228,000 in the Segura basin and its immediate surroundings) and estimated 2,297 hm3 a year necessary for this; This volume had to be brought together through greater and better regulation of the rivers Mijares, Turia, Júcar, Segura and some autochthonous ones, to which would be added the flows transferred from the headwaters of the Guadiana and, above all, the Tagus; In fact, the capture of the Tagus, an entirely new proposal, had to provide the essential contribution for the correction of the aforementioned hydrographic imbalance.

Due to the exceptional significance and extraordinary scope of the Levante Irrigation Improvement and Expansion Plan, it is not surprising that, three months before the submission of the National Hydraulic Works Plan, in May 1933, to the Constituent Courts, its guidelines , priority objectives and primary actions were revealed, as a preview and scoop, in the conference written by Lorenzo Pardo and entitled “Guidelines for a New Hydraulic Policy and Riegos de Levante”, to the great assembly of living and political forces of the provinces of Albacete, Alicante, Almería, Castellón, Murcia and Valencia, meeting in Alicante in the disappeared Monumental Hall, on February 27, 1933. It is regrettable that nothing remembers, in the old location of the premises, the anniversary of such an entity. Especially when the spirit of the act, concluded by Indalecio Prieto with a “Viva España”, clamorously chanted by the attendees, had continuity: the republican-socialist coalition was displaced by the radical-cedista, the new Minister of Public Works, the radical Rafael Guerra del Río, far from rejecting the Plan, ordered its publication and promoted Manuel Lorenzo Pardo to the General Directorate of Hydraulic Works; and he went even further: he ordered the inclusion in that of the office with which Prieto had sent the Plan, six months earlier, to the Constituent Cortes, where the then minister stressed that nothing would be “more unfortunately sterile than to watch it on the paltry mound that can raise the political flag.

Certainly, at this time of the so-called “Ecological Transition” -the semantics of the expression deserves separate consideration-, attitudes of this nature and politicians of the stature of Rafael Benjumea, Indalecio Prieto and Rafael Guerra del Río, who knew how to act as the water issue is a matter of State. Thanks to his talents and patriotism, an exceptional technician such as Manuel Lorenzo Pardo was able to render an immense service to the country, whose hydraulic policy during the second half of the 20th century had as its axis, with updates and additions, the I National Hydraulic Works Plan, monumental achievement, less remembered and publicized than it should.