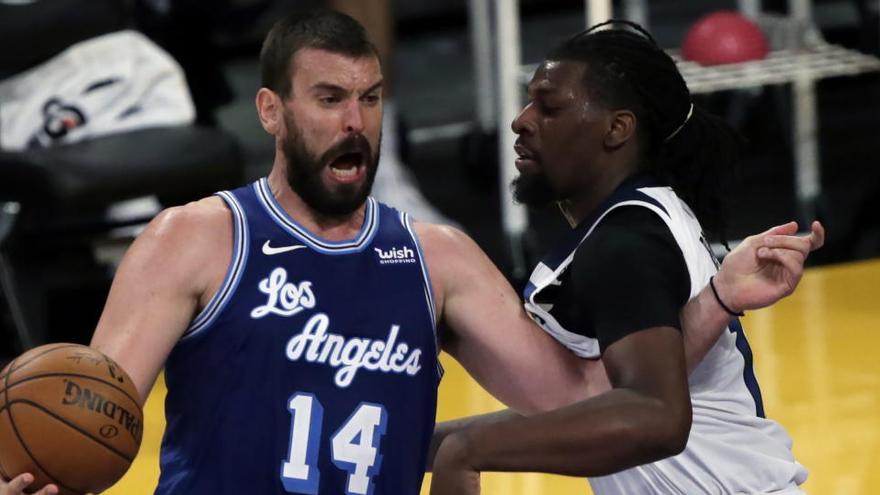 A splendid Marc Gasol (12 points, 8 assists, 7 rebounds and 4 blocks) He showed off this Sunday in the Los Angeles Lakers beating some poor Minnesota Timberwolves (127-91) in which Ricky Rubio and Juancho Hernangómez were of the little salvageable.

With a sensational Kyle Kuzma (20 points, all of them before the break), the purple and gold They added their second victory of the season this Sunday, while the Wolves reaped their first loss and missed the injured Dominican-American center Karl-Anthony Towns.

With a greater presence in attack and defense than in the two previous meetings, Gasol stroked the triple-double, came out again in the starting five and filled the gap left by Anthony Davis, who did not step on the court due to a blow to the calf.

The Spanish pivot he did not miss a shot in the 20 minutes he played, he shone from the perimeter (3-for-3 on 3-pointers) and gave a high-post passing masterclass, an aspect of his game greatly appreciated by the Lakers when they decided to sign him.

For its part, Rubio (9 points, 4 rebounds and 4 assists in 18 minutes) and Hernangomez (6 points and 5 rebounds in 13 minutes) offered some glimpses in a very gray Wolves.

During the warm-up of this match held at the Staples Center in Los Angeles (USA), the three Spanish players were seen sharing jokes and hugs, who were proclaimed champions with their national team at the 2019 World Cup in China.

The Lakers bet on Kuzma from the start in the absence of Davis and the young forward scored a real game.

Kuzma made the first three triples who tried and catapulted the Los Angeles team from the start (18-6 after the first four minutes).

Rubio jumped onto the court shortly after and scored a daring penetration on his first move to slightly awaken the attack of a stunned Wolves. But the Lakers were totally inspired.

Montrezl Harrell became strong in the zone with 4 consecutive points and the winners of the NBA title in the “bubble” of Orlando (USA) closed the fourth in a big way with 6 of 10 in triples and a 71% success rate. to the hoop (40-23).

The Lakers’ resources seemed endless, as Markieff Morris and Alex Caruso took over offensively with 5 points per head to further distance the Californians (50-27).

A 0-8 run, with two triples from Rubio and Hernangómez, suggested an attempt at resistance by the Wolves (50-35).

Everything was left in a mirage because of an omnipresent Kuzma and a regrettable percentage from the triple in the Wolves (3 of 22 in the first half) that summed up the impotence of the team trained by the young Ryan Saunders (67-45).

The passage through the changing rooms did not alter the rhythm of the game.

A Gasol absolutely in his sauce took the reins of the Lakers with splendid assists for Kentavious Caldwell-Pope and LeBron James and, in addition, he scored a very distant triple that placed the Wolves’ comeback in the realm of the impossible (96-63).

The bleeding of the Minnesota team continued in a last quarter with nothing at stake and in which both teams reserved their figures for their next commitments (the Lakers will face the Portland Trail Blazers on Monday while the Wolves will meet the faces Tuesday with the Los Angeles Clippers).