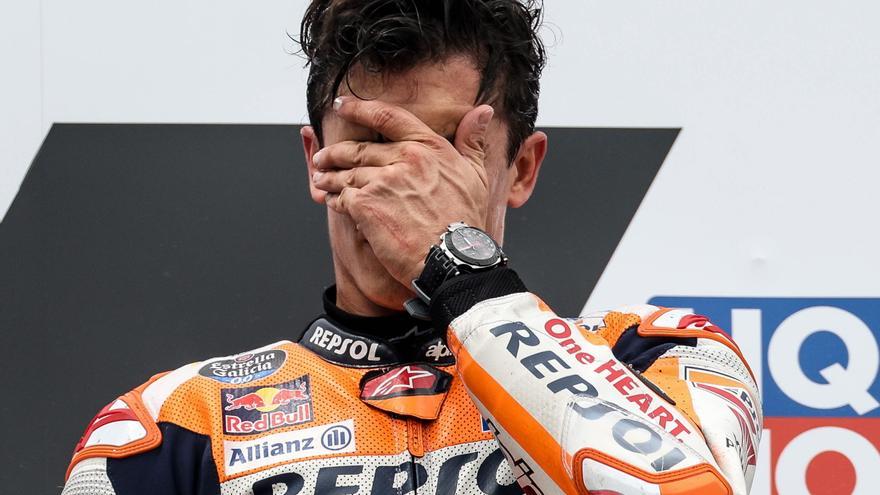 The Spanish Marc Márquez (Repsol Honda RC 213 V), winner of German Grand Prix of MotoGP on his “talisman” circuit at Sachsenring and 581 days after his last victory in Valencia, he acknowledged: “I still don’t quite realize what has happened, but it is true that it has been a difficult moment in my career Y this victory It will help me a lot to continue. “

“When you are in a situation like this, you come from three consecutive zeros, it is not easy to continue and not from a physical point of view, so when I crossed the finish line I thought of all those people who have helped me to be able to be today here, “recalls Marc Márquez fondly.

“In the next race we will return to our real situation”

“The truth is that it is impossible to get out of such a situation without the help of more people, from the team, from the doctors, the ‘physio’, the family, the friends, because he doesn’t leave here alone and the truth is that they have helped me and are helping me a lot, but in the next race we will return to our real situation ” says the Repsol rider, who also wanted to thank Honda “for the respect” they have shown him “during all this time.”

Marc Márquez also recalled one call he had with Australian Mick Doohan, who in the 1992/1993 season went through a very similar situation.

“Logically, when you are in a difficult condition you seek to console yourself with someone who has gone through your situation or something similar, and one of them has been Alberto Puig -his sports director-, who has helped me a lot, Emilio Alzamora -his representative and former pilot- also, but I had a call of almost half an hour with Mick Doohan in Mugello that helped me a lot, “recalls Marquez.

“He told me that he made stupid mistakes, as I have done this year too, but he told me that it was normal, that it happened to him and that then everything changes,” Márquez said about it.

A deserved victory that was badly needed 🙌

🗣️ @marcmarquez93: “For me, competing is fighting for something. And fighting for victories, podiums, is what I want. I said it yesterday, that I wouldn’t notice my limitations so much”#GermanGP 🇩🇪 #MotoGP 🏁 pic.twitter.com/Klc6SsG64x

“Today I made the perfect start and I also did a perfect first lap and then when I saw some drops fall, I thought ‘this is mine’ and I continued pulling and pushing as before when I was completely dry and I got a distance” , explains the winner of Germany.

“When I saw that Miguel (Oliveira) cut the differences for me, I had my moments of doubtIt was difficult to push because I was thinking more about the situation and about the three consecutive zeros that I had in the last three races, that is why it was important to take the bike to the end of the race and in the end we did well “, highlighted the rider from Repsol Honda.

Márquez retraced his steps again when he remembered: “When I suffered the injury, I always had the feeling that I would come back and strong, but the first time I rode a MotoGP in Portimao I thought ‘ufff, I’m far from my level’ and that moment was very hard for me and also in the following races, but what I did was avoid the comments and concentrate on my team ” .

“This victory is different, I don’t know why, but I don’t feel euphoric, maybe I will assimilate it when I get to the box, but it is true that this will help us, because it was difficult on a mental level after three consecutive zeros and the easy thing would have been to cut and finish on the podium, but it is not my mentality, and I wanted to continue drawing my line and follow my instincts ” , assures the always combative and nonconformist Marc Márquez.

On the physical side, the Repsol rider acknowledged: “The pain is there and it is true that I have had more difficulties in this race than in Jerez, but about the rest of the races I can’t say anything because I didn’t finish them, I could not do more than ten laps in a row, so I imagine that next week it will cost me more than Assen, which is a circuit that requires more physical conditions, but pain is pain, it is not a normal arm, but it needs weather”.

“Holidays are going to be as important as work”

Márquez added his eleventh consecutive victory in Germany, but in spite of everything he pointed out: “In today’s race I had to stay very focused and not give up; that was one of the key points, so I decided to forget about everything and tried to recover the memories of this circuit and I changed the name of Oliveira to that of my brother when we trained at home, when the fastest is behind and the slowest is in front and I thought, well, if I recover there is no problem, but the truth is that I pushed hard and didn’t throw in the towel. ”

Marc Márquez stressed that this time for him “Holidays are going to be as important as work.” “I need two weeks to rest and disconnect, because it has been two winters that I have not had a vacation due to the interventions and physiotherapy, and I need to disconnect even if I am not prepared in Austria.”