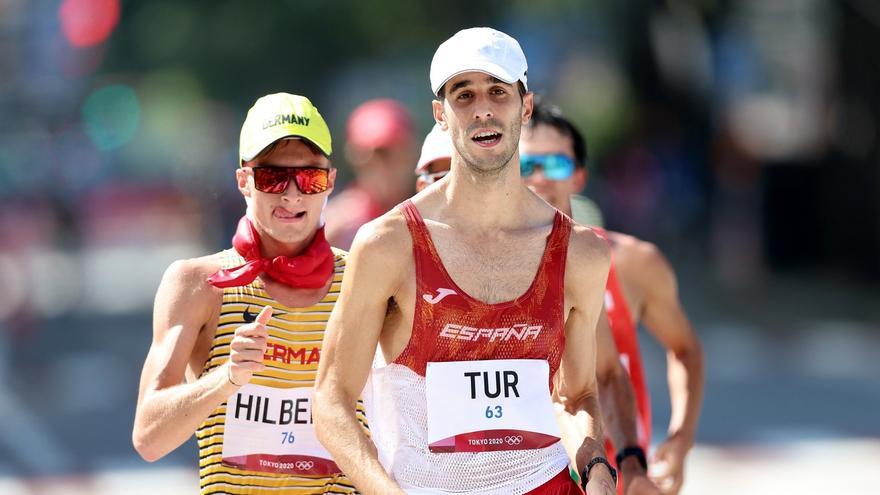 The Spanish Athlete Marc Tur finished fourth in the 50-kilometer march race of the Tokyo 2020 Olympic Games this Friday, a tremendous performance in Sapporo against the favorites, in which he saw the podium slip away 200 meters from the finish line, while ‘Chuso’ García Bragado finished 35th in his eighth Games.

In his Olympic debut and with just a dozen international appointments, the 26-year-old Balearic gave the podium in the most cruel way, when Canadian Evan Dunfee passed him at the gates of the finish after a slump in the final stage. The gold went to the Polish Dawid Tomala and the silver to the German Jonathan Hilbert. Despite the change of venue, the race soon had the 30º and 70% humidity of Tokyo. Tur barely showed signs of weakness at kilometer 30, but from there he went on to lead Tomala’s chasing group. The Pole put the turbo at that moment and began to put times at his discretion to ensure a quiet gold in the farewell of this event on the world calendar.

Behind, Tur’s group got smaller until there were four walkers for two medals in the last five kilometers: Hilbert, Dunfee, the Portuguese Joao Vieira and the Japanese Masatora Kawano. The Spanish was the one who gave the group the blow and the German left with him for the last two kilometers.

Tur seemed to secure the medal, although the German went for silver, but when it was time to savor the metal, the Spanish got the evils that he had kept at bay. The cap was off, the water on top at the last refreshment station and an ironic laugh that seemed to mean ‘it can’t be, so close but so far’. The regular and powerful rhythm left the Spaniard half a kilometer from the end and Dunfee, still on the prowl, pressed for the podium, which Rio de Janeiro 2016 denied him with a fourth place. This time the chocolate medal went to the Spaniard, as it had been to Álvaro Martín a few hours earlier in the 20-kilometer test.

Meanwhile, Luis Manuel Corchete failed to finish and Olympic legend Jesús Ángel ‘Chuso’ García Bragado entered in 35th place. The Madrilenian, in a whole record of eight Games, managed to complete the test although not in the ‘Top 10’ that it had as an ambitious goal. To their 51 yearsBragado said goodbye with one more goal in his legs. The Madrilenian endured 25 kilometers in the second race group, just over a minute from the lead, but was losing ground. After eight Games, Bragado will have his well-deserved vacation. That first part of the test was marked by the French Yohann Diniz show, in a series of strange stops. With three titles of European champion and one of the world, the also veteran of the road was leader of the beginning, although what he got seemed to be to stand in a portable toilet. Afterwards, he entertained himself in several areas of water, he returned to recover with the leading group, and he stopped again, until he withdrew. The Chinese Yadong Luo was the first real reference of the race in Sapporo.

On the 20-kilometer road they already hunted the Asian, with Tur in the garlic and Bragado and Corchete at 40 seconds and a minute. Tomala began to measure the forces of his rivals and blew the platoon towards gold. At that moment Tur seemed to be weak, but it was to get a run because after the champion it was the best of the morning. The Pole, a walker who this same year had made the jump to 50 km, put seconds of calm, which would have been good for the Spaniard. Tur spoke to the German, they saw it clearly, but after Hilbert left for the Balearic Islands his vision blurred and the bronze that he saw a few meters after almost four hours of walking disappeared.

Also Read  Tim Dowling: Will Kitch the Electrician make me his apprentice? | Family