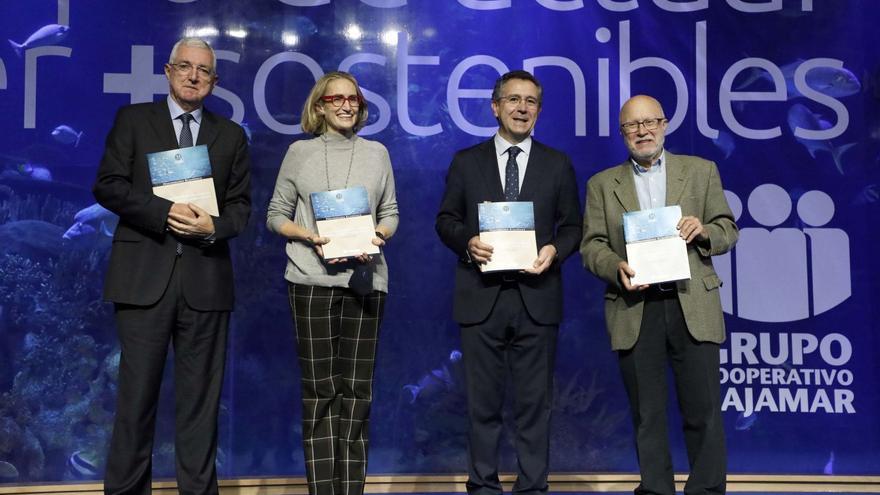 “The seas of the world, and the Mediterranean even more because it is an inland sea, are under increasing pressure derived, directly or indirectly, from the activity of a global population that does not stop increasing.” So reads the prologue to «Marine biodiversity. Risks, threats and opportunities ”, the latest installment of the collection of economic Mediterranean socioeconomic studies, edited by Cajamar and presented last Thursday at the Oceanogràfic de València.

However, this monograph seeks to be, as stated by Manuel Toharia, coordinator of this thirty-third installment, a “call to action.” And it is that, the specimen delves not only in the threats that cross the marine environment, but also in the multiple opportunities that it generates and that are, as claimed in the presentation of the work, the only alternative to preserve the integrity of the sea and , through this, the sustainable development of the planet. Under this firm purpose, the Red Sea Auditorium of the Oceanogràfic de València hosted the presentation of a book that has had the participation of up to 21 experts from various areas of knowledge, from economics to science or dissemination, drawing a roadmap to understand what the sea is in a transversal way.

The event, which stood out for its great attendance success and which, in addition, could be followed telematically through the Tierra platform, included the intervention of Eduardo Baamonde, president of Cajamar; Manuel Gutiérrez Navas, director of the Mediterranean Economic collection; Celia Calabuig, director of Avanqua; and Manuel Toharia, coordinator of the issue.

Sustainability as a guiding principle

Giving visibility to thematic areas that are “important, strategic and transcendent for society” is, in the words of the president of Cajamar, the backbone on which the collection of socioeconomic studies published for two decades by the cooperative group is structured. “When delving into sustainability and the bioeconomy we realized that we had to dedicate a monographic series to the analysis of the sea,” explained Baamonde, “if there is a vulnerable ecosystem that affects our lives in the medium and long term, it is the sea.” . Thus, sustainability, understood for Cajamar not as a strategy, but as a guiding principle, is inescapably linked to the marine environment.

In this sense, its president praised the figure of Toharia, who deserves a long professional career, highlighting that “he was the right person to coordinate this delivery due to his knowledge and ability to disseminate and attract talent.” “This book is not designed only to know and understand the sea, but to invite all of us to do things better,” he admitted. A thought also shared by Calabuig, as the director of Avanqua expressed that this installment “brings scientific language and nature closer to readers in a responsible way.”

A gesture that he praised when considering it “essential” to “make the care of our seas our center of action” that serves to “build a better future for the next generations.”

Along the same lines of argument, Manuel Gutiérrez Navas, who defended sustainability as “the central axis of the public agenda throughout the world,” was positioned. In the specific case of the underwater environment, he assured that it is a biophysical system in fragile equilibrium in which water is the fundamental element for life. In the same way, he also urged reflection on what the oceans of the future will be like, which, from his perspective, are “living spaces and a source of sustainable productive and economic development.”

The presentation of the book in the Red Sea Auditorium of the Oceanogràfic had a large number of attendees. / M. Á. MONTESINOS

The monograph, in detail

«Marine biodiversity. Risks, Threats and Opportunities »stresses the need to protect and preserve the oceans and seas. For this reason, Cajamar promotes programs and actions aimed at reinforcing and amplifying respect for marine life. «Our commitment is to provide knowledge that contributes to inform and sensitize the entire society. It is time to act and to be more sustainable, “argued Eduardo Baamonde.

To materialize such an ambitious purpose, Manuel Toharia assumed the responsibility, “with great enthusiasm”, as he stated, of coordinating the issue. “I wanted to do this project and take it to my field, but without forgetting something very important: it was necessary to carry out a SWOT analysis of the marine environment and apply it to environmental sustainability, specifically the sea,” he explained. “We found a large team of people who have collaborated in this project, including many experts from the Oceanogràfic Foundation,” he admitted. An entity that he knows well, since for more than five years he has collaborated closely with it as a scientific advisor.

To delve into the weaknesses, threats, strengths and opportunities of the marine environment, it was necessary, he reiterated, to carry out an objective approach to the concept. “We have no idea about the sea, now we begin to know a little bit, but only a very small percentage. Talking about the sea was laying the foundations of who was the subject of the book, “he said.

And it is that, not only do they represent 71% of the surface of the planet, but they are places of communication between peoples when inventing high-altitude navigation. To delve into this last aspect, the title has the participation of the researcher Juan Antonio Romero, who contributes to the work an experiential account of his countless journeys, as well as the testimony of Javier Cacho, writer and communicator specialized in polar seas. “I also wanted to talk about issues related to very partial aspects such as the seas and their climates,” continued Toharia, “the world is full of thousands of climates, but if we consider the whole as a system, it is full of huge subsystems such as the ecosphere . In addition, we must include the variable of human action, since we negatively influence the atmosphere and the seas. A theme addressed in the monograph by Javier Martín Vide.

The work also explores specific items such as parasites, decompression experienced by marine animals, such as the turtle, or conservation. Authors such as Ana Ahuir, Vicente Marco-Cabedo, Daniel García Párraga or Francisco Torner, among others, make these casuistry visible. Another relevant area for obtaining a global knowledge of the sea is the understanding of its relationship with the land environment. Jorge Olcina is in charge of making an objective approximation of the land-water interface.

“The sea begins to complain, although it is very large and very deep,” denounced the coordinator of the specimen in relation to the spillage of oil slicks and plastics. And, as he explained, each year between eight and ten million tons of plastic are dumped into the sea. On the advantages that the recycling of this material represents and, in turn, the threat verified in the marine environment, Ignacio Fernández Bayo and Pura C. Roy deepen. In turn, it is not only fair, but also necessary to raise the strengths and opportunities of seas and oceans. Aquaculture, ecological renewal rate, sustainable fishing or oceans as a vital pantry are constituted as disruptive alternatives to the “continued plundering to which the gigantism of the sea is subjected,” said Manuel Toharia. The experts who delve into these sustainable dynamics are, among others, Mónica G. Salomone, Francisco J. Espinós, Alicia Borque-Espinosa, or Javier Garat.

Maritime transport and the great unknown submarine cabling, “without which global connectivity is not possible”, allow Chola Mateos to speak of the sea as an element of communication. Finally, the monograph also focuses on fresh water. In this regard, Toharia was forceful: “We are wasteful.” “Fresh water is a scarce good that cannot be produced except through desalination,” he explained. However, the coordinator of the work claimed that this process cannot be undertaken using fossil fuels, but rather renewable ones.

Finally, «Marine biodiversity. Risks, threats and opportunities »ends with a reflection highlighted by its coordinator. And it is that, “the disclosure is to ask things that people do not ask.” «What prompted us to do this book is that whoever reads it is alive, that they go beyond what is told, that they want to act beyond what is defended here. That they ask themselves more things and want to do things better than they did, “he concluded.

Mediterranean Economic is the collection of socioeconomic studies published by Cajamar for two decades. A dissemination and analysis project that began in 2002 with the aim of generating shared knowledge and drawing links between multiple social actors. Throughout its extensive projection, the compendium of published titles, which now totals 33 issues, has brought together more than 700 experts and specialists in the various subject areas analyzed. As explained by Manuel Gutiérrez Navas, director of the project, these publications have been coordinated by prominent economists such as Jordi Nadal, Juan Velarde, Antón Costa and Ramón Tamames, as well as by personalities linked to multiple productive sectors, such as agriculture. Names such as Minister Vicent Soler, Adela Cortina, Joaquín Maudos, Jose María Álvarez Coque, Juan Juliá or Daniel Ramón, among others, also adhere to this list.

And it is that, the copies of the Economic Mediterranean have established themselves as a benchmark in the field of disclosure and their growth perspective is, at this point, unquestionable. Thus, next year two new volumes will be presented, forming a collection that will add 35 works of social significance. The next installment, coordinated by Eduardo Moyano, will be released next January. Under the title «Rural Spain. Challenges and opportunities for the future ”, the book will focus on the“ reality of depopulation, but also on initiatives and new entrepreneurship scenarios and development experiences ”, explained Gutiérrez Navas. In addition, a new installment will be presented at the end of next year. This second volume will focus on the banking industry, under the coordination of Santiago Carbó, focusing on aspects such as sustainable finance, digitization or cryptocurrencies, among other areas of analysis.