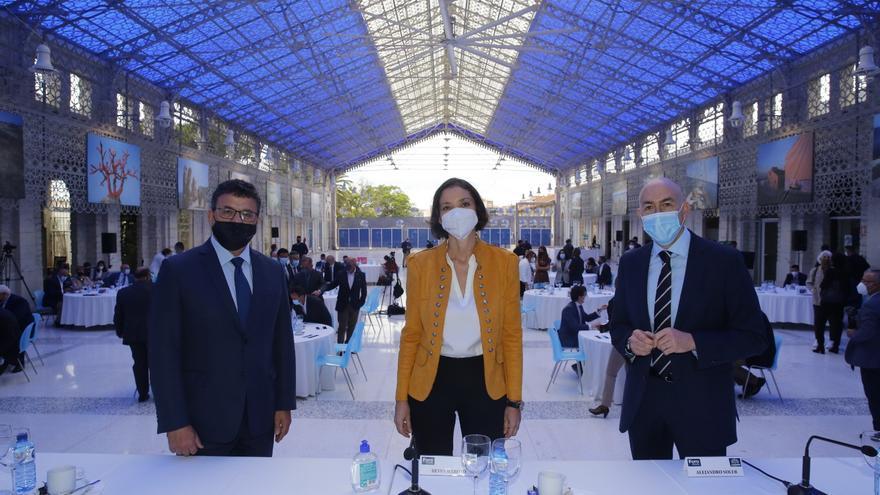 “There will not be economy recovery if there is no recovery in tourism, the economic and industrial activity most affected by the pandemic ”. The Minister of Industry, Commerce and Tourism, Reyes Maroto, was forceful in his participation in Alicante in the «Alicante + Europe Forum», organized by the INFORMATION Club at Casa Mediterráneo. Maroto assured that the British will be able to travel to Spain without problems as of May 20. As for the setback that supposes that the country continues, however, in “amber” at the traffic light of the Government of Boris Johnson which regulates the United Kingdom’s restrictions on its tourists upon return from holidays (ten-day quarantine), the minister anticipates that the situation will take a turn at the beginning of summer, given the good level of vaccination, and that British tourists can travel in “green (no restrictions) in the coming weeks”, which will mean the lifting of the quarantine when they return home. The minister confirmed that the ERTEs will be extended until September, which allows 112,000 workers to maintain employment, even if they are not working right now. The forum is sponsored by Casa Mediterráneo, Baleària, the Chamber of Commerce, the University of Alicante, the Miguel Hernández University of Elche, the Generalitat, the CEV and the EUIPO.

The minister bases her trust so that the British tourists return without restrictions next July in the data on the rate of vaccination with, according to the figure that contributed yesterday, almost six million people with the full dose, 19 million Spaniards already with a first dose, 28% of the population. Maroto maintains the commitment to have 70% of Spaniards vaccinated in summer, but also claims responsibility, and hopes that “the images of young people celebrating the end of the state of alarm with large crowds during the weekend have been an anecdote and not become the norm. We are all tired, but we must continue working because we have ended the state of alarm, but the battle against the pandemic continues, because we have not defeated the virus.

The minister highlighted the effort made in the Valencian Community, autonomy with the best Spanish covid containment datato. And in line with this control, Maroto reiterates that “we have been working with the UK Government for some time and trying to territorialise the issue of traffic lights. It has not been possible, but I think that it is a matter of a short time that Spain is green and we can receive British tourists this summer, as well as that visitors from the United States, Latin America and Asia return, but for this we must achieve and work to that we are considered a safe destination.

Also Read  Infectious disease is found in an aromatherapy spray

Regarding the deadlines for tourism to recover, Minister Maroto trust you to have a good second semester, which will affect all economic sectors, and which will come with the resumption in October of Imserso trips. Maroto admits that it is necessary “to update the prices and so we have transferred it to the Ministry of Social Affairs.”

70% .The Government ensures that in summer there will be group immunity

Maroto confirmed that 70% of Spaniards will be vaccinated in summer.

During her speech at the “Alicante + Europe Forum”, the Tourism Minister insisted on the importance of advance vaccination and in the message that the end of the state of alarm does not imply that we should not continue to maintain control over our behavior and admits the need to protect companies.

In the specific case of tourism, Maroto has decided that the tourism sector receives 16,000 million euros in the next three years23% of the state plan, of which about three billion will reach the Valencian Community, aside from 637 million to “protect companies.” Added to this is the fact that the Government has decided to extend the ERTE, whose validity ended on May 31, until September 30, which “will maintain the protection of 112,000 workers.” Maroto stressed, on the other hand, that “64,000 companies have had access to 12,000 million in ICO credits.” In total, the Government is going to allocate 70,000 million euros (fondos Nextgeneration Brussels) in the economic recovery in the post-pandemic stage with two priority objectives: ecology and digitization. «We want to face a double transition towards green and digital in an industry that, I believe, needs a great State pact, and in terms of tourism, the immediate objectives are to reactivate safe travel and promote promotion in this sense because there is demand . There is no person I come across who does not tell me that they are looking forward to traveling again. Tourism has to bet on quality, digitization and security in the coming years. Now what we are doing is working with some autonomous communities and destinations, for the development of pilot tests that will begin to be developed now, throughout May, “he revealed.

In this regard, the minister said that they had received a specific request for the Valencian Community to be part of this pilot test and explained that they are currently working with the European Commission on these projects. “We want the largest number of Spanish destinations to be included in the pilot projects to be able to test the certificate,” he stated. According to the minister, Spain is ready to start using these certificates because the will of the Government is to recover the tourism sector, which is “key” for economic reactivation.

Also Read  "We are not a racist family," says Prince William. But it is not so simple | Race

The evolution of the pandemic with the acceleration of vaccines «is going to make, as we are already seeing, a gradual reduction »of incidence rates, «It will allow us to face a summer with more optimism than the one we were able to tackle last year, with more confidence, to guarantee both national and international mobility ”.

«And we hope, as the people in charge of the hotel management have transferred us HosbecThat in the coming days the Valencian Community and destinations as beloved as Benidorm, here, in the province of Alicante, begin to regain a certain normality also for national tourists, “said Maroto. During her visit to Alicante, the minister stressed that “the expectations we have are optimistic, they are prudent, because clearly it is going to have to recover, first, confidence in travel. Hence, both the certificate and the new recommendation we are working on to guarantee travel outside the EU give us optimism when it comes to tackling that mobility with better guarantees, “he said.

Maroto was convinced that Features, Despite the restrictions, it is “also an ideal showcase to reinforce confidence in traveling to Spain. We will be endowed with a promotional campaign that we are going to present on Wednesday with a hashtag, which I also hope will reach many tourists who are deciding where they will travel this year, to consolidate Spain as a safe destination and, above all, reinforcing our products, our destinations, “he said.

The minister has not avoided any question, not even the failure of the PSOE in the regional elections of Madrid, in a campaign in which unpleasant episodes such as threats received by herself occurred. “I had never received a threat and it affected me. Those who know me and in Alicante there are more and more people who know that I am close, open to dialogue and I don’t mind catching a plane or train at any time to face a negotiation ». Regarding the electoral setback against Isabel Díaz Ayuso, Reyes Maroto is committed to a deep reflection. “We went with great enthusiasm in the face of irresponsible elections. Madrid needs a change. I do not agree with Ayuso’s policies. Madrid has a budget of 20,000 million euros a year but with great inequalities.

“The sun and the beach are our flagship, but we must provide it with more product to increase spending”

«In two years we will return again with enthusiasm. We are now reviewing the project in Madrid to find out what the successes and mistakes have been, but, as I say, I am not lacking in illusion. Wherever I am, I will be at the service of the people, doing politics from below, because I think that is how politics is understood, at the service of the people, to solve problems and create opportunities, “he said.

“Tourism is going to receive 16,000 million euros in three years”

The Socialist minister insisted that the elections were “irresponsible” due to the health situation and the incidence rates of the virus, but acknowledges that “once the polls are opened” it will “win.” «We will return with enthusiasm. I am still very excited, in politics you have to know how to win and lose, ”she insisted. The minister recalled that she began her political career in Madrid in 2015 and that Angel Gabilondo He proposed that he be part of the political project if he won. “I thought about it because, although being a minister is an honor and pride, you also have to know in politics to be where you are needed and I think a change is needed in Madrid,” he told an audience that was convinced that Reyes Maroto is in these moments a name to take into account to head the list of the PSOE in the Community of Madrid in two years.

The Minister of Industry, Commerce and Tourism, Reyes Maroto, based a large part of her speech at the “Alicante + Europe Forum” on insisting that Spain is playing the recovery in the advance of vaccination and, in this sense, he praised the important role that Europe is playing in solving the crisis. He highlighted the fact that Brussels has closed the purchase of another billion doses of the Pzifer vaccine and the fact that Spain is going to start administering 5.5 million doses of the Janssen, which is a single dose «which will allow us to make a leap in the number of people who are already immunized with a single dose. We also have four research projects in Spain to obtain the vaccine coordinated by the CSIC, so we hope that by the end of the year we will have a Spanish vaccine against covid. We also have four vaccine factories. We must prioritize talent, the health industry and for this we must invest and this Government is in this, “said Minister Reyes Maroto.

The President of EUIPO, Cristian Archambeau, also claimed, in turn, questions from the forum, the urgency of launching the digital green certificate and that British citizens can benefit from it, asking for reciprocity. “Our goal is for it to be in June and, of course, for there to be an agreement with Great Britain as we did with Brexit.”