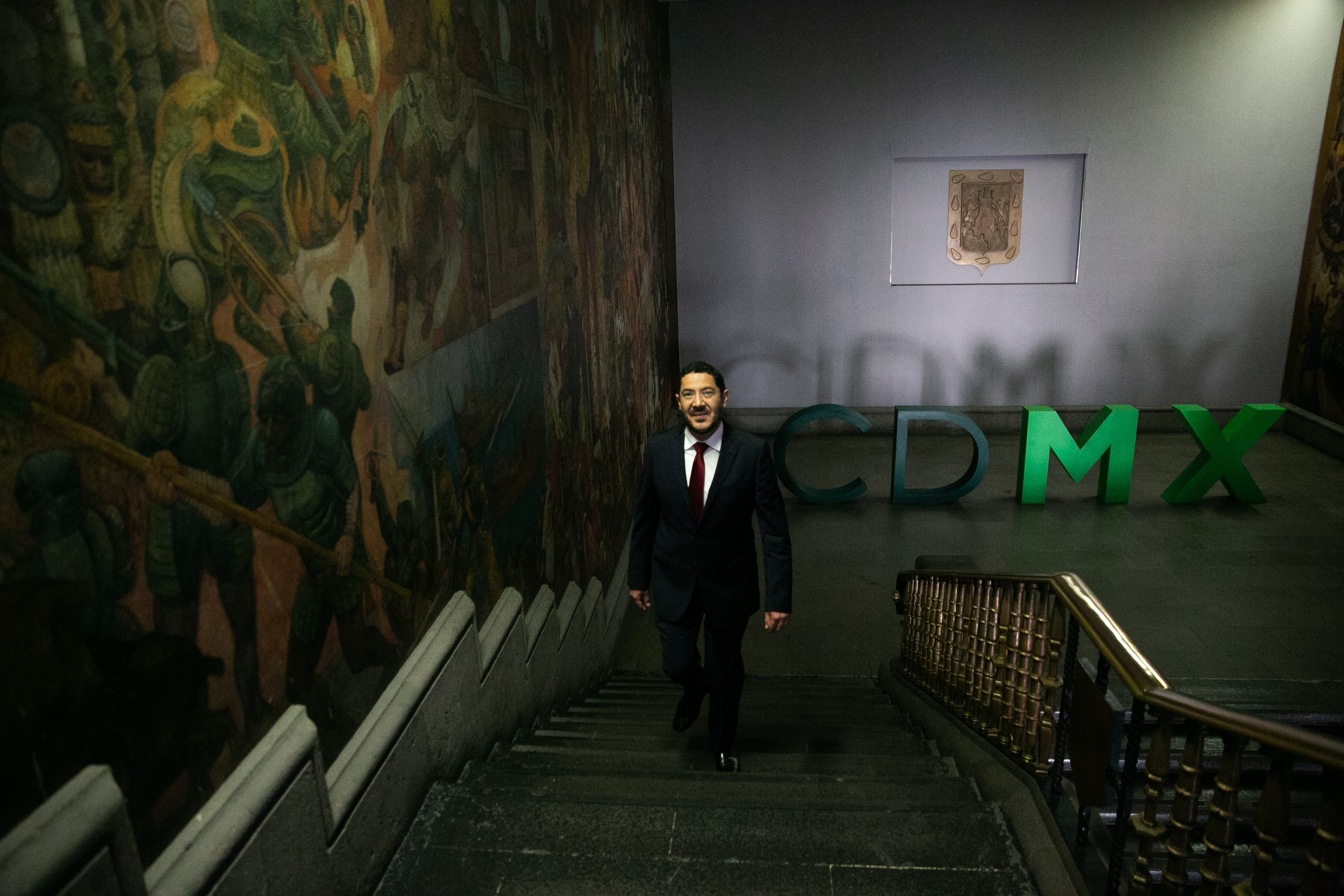 The new Secretary of Government of Mexico City, Martí Batres (Mexico City, 54 years old), has in his office three important paintings: a portrait of his boss, the president of the capital, Claudia Sheinbaum; a photo hugging a smiling president Andrés Manuel López Obrador; and a painting signed by him. Thousands of tiny little heads fill the plate of the Zócalo of the capital in the drawing, as in one of the demonstrations of the Morena leader in 2006 when he lost the presidential elections for the first time. There are no flags or party banners, although when you look at the painting, you only think of one of those days of fighting. The conflict is different now, a group of opposition mayors has formed a bloc that challenges the governability of the capital for the next three years. And the mission of Batres, after the new political map left by the local elections and that keeps the city divided in two, is to clear the blows, negotiate with them, stop their advance.

The alliance of the PAN, PRI and PRD managed to snatch four regions of the city from the party of the president and the head of government and drew an unusual map in which the west will be controlled by the opposition coalition (led by the PAN) and leaves in the this is the morenista stronghold. Batres talks about how that result was reached and what the Government’s keys are before the second half, although he rejects the political cost that two great tragedies could have entailed for Morena in these first three years: the covid-19 pandemic and the collapse of Line 12 of the subway, where 26 people died.

Question. You arrive at a troubled moment. The blows to the doors of the Congress of the city by police to a group of opposition mayors have shown the new face of the next years of Government. Is governance at risk?

Answer. A city divided in two is what we do not want. That is why we were very clear, when this union of mayors asks for a meeting, the answer is: we are one city. The Government cannot negotiate with only that group of mayors because it can affect others. You have to deal with everyone. And that’s 16, not nine. The Government chose to hold a meeting with each of them. Moreover, before these events, all the mayors and mayors had their formal invitation to meet with the head of government. And the Government has worked a lot for conciliation and dialogue.

P. Those who protested that day just accuse him of the opposite. How difficult will it be to negotiate with a group of mayors who even asked for his resignation?

R. The mayors have expressed at the gates of the Government building that this was not their request. There are things that will be solved more easily and there will be more complex issues. Let’s say budgeting is more difficult because the city lost almost 20% of its revenue to the pandemic. Judging by the opinions that the mayors gave when leaving the meeting with the head of Government, I did not see a conflict. What citizens want is for the city to be united, calm, they do not want there to be confrontations between the central government and the mayors. But I insist: on the part of the city government there has been no confrontation, our speech has been not only coherent, but also careful and kind to the mayors and mayors.

P. Regarding the loss of mayoralties after the last local elections of June 6, what do you think they failed in? Was it a vote of punishment for the government of the capital or for federal policy?

R. Neither one nor the other. We do not consider, in a general analysis, that it is a punishment vote against the local government, even less federal, we must analyze things: a very important point is to observe the general trends of the vote. In reality, Morena did not lose electoral percentage. In some cases it won and in some regions it grew where it had not had a greater presence. But their overall vote is more or less the same as in 2018. So the result has to do with the way the forces were accommodated. In other words, when the PRI, PAN and PRD came together, the results changed. The elections that were four in 2015, in 2018 were three and this time they were two. That is the most important point, forces that had not joined together, that it was not on the general horizon that they could join forces.

P. They got together and achieved nine mayoralties …

R. Did the opposition vote go up? No. They rearranged themselves differently. In any case, what should have been warned from Morena – not so much from the Government, because it was not his turn – is that there was a constellation of alliances that forced other types of broader, different alliances to work with new actors, than those that were coming. doing previous years.

There are also elements that go further, that escape the general dynamics. A presidential election was not at stake, the election of the ruler of the city was not at stake, which by the way has a very high acceptance. It is also possible that this leads us to reflect on a balance of the mayors’ governments. This means that progressive mayoral governments have to make their own effort, beyond that made by the central government.

P. When looking at the map left by the last elections, many have speculated with a conservative tendency in the city, how do they interpret it?

R. Mexico City continues to be a progressive city. That is, there are no elements that tell you that citizens have turned, that they have become more conservative. For many reasons. Because finally a part of the electorate that voted for the coalition is not necessarily a right-wing electorate. Because even some of the forces that participated in the coalition do not claim to be on the right.

P. How did you measure the political cost that the tragedy of Line 12 of the subway could have entailed?

R. There is a data that is very revealing, the users of that transport system did not change the intention of their vote, even in the areas with the greatest impact of that event. For example, Morena wins in Tláhuac and Iztapalapa, and with a very high margin. They are from the areas where it obtained the highest levels of voting. Also win in Xochimilco. In other words, the population that uses this section of transport did not vote against Morena. Rather, the fact is used politically as part of the narrative used by the right in certain segments of the upper middle class. Not so much because of the impact it had on itself, but because of the political use that was given to it.

P. The process to find out the specific causes and those responsible for the collapse seems to be delayed. How do you respond to the families of victims who seek justice?

R. There will be justice. The guarantee that citizens have is that there are authorities who are honest, that is, we do not have authorities that are inserted in swarms of nebulous political-economic interests, but we have authorities dedicated to work and people. And that is an extremely important distinction.

P. Can that line be safely reused?

P. Another of the The most controversial issues of the Sheinbaum government has been its relationship with the feminist movements in the capital. After the dispersion with tear gas, of the walls to protect buildings … Are there any plans in these three years on the agenda to approach these movements?

P. But that step, secretary, was nine years ago, what steps are you going to take to get closer to feminist demands from now on?

R. There are two more states that have done so in the context of the transformation that the country is experiencing today, Oaxaca and Hidalgo. Let me put it this way: the Fourth Transformation is what has allowed women’s rights to advance elsewhere. But it strikes me that just in the city where the most rights of women are recognized, where we have the most advanced Penal and Civil Code, the most advanced special legislation … Many of these phenomena occur. There are places in the country where there are women who have gone to jail for having aborted after a rape, but the protests that occur are not there, in Guanajuato, for example. Isn’t it paradoxical?

P. The women who demonstrate in the capital do not only do so to protest their situation there, but so that the demands are spread throughout the country. One of their mottos is: we shout for those who can’t. So, will there be any approach to your requests from now on?

R. It is important to note that there has been no repression from the government. Basically what the citizen security of the capital has done is a task of containment and channeling, but there are no political prisoners, there is no use of weapons, of instruments to subdue women. There are policemen who resist and endure shoves and other series of situations, but they never take offensive action against those who are demonstrating. Would a greater rapprochement of the city with feminist organizations be good? Yes, of course, that’s always good. In fact, a few days ago the head of government met with a group of the most prominent, historical feminists, precisely to deepen a rapprochement and empathy, they finally share the same ideals. And we are going to insist on it, more and more. Have the closest relationship and review the decisions that have to do with their demands, legislative and administrative and justice.

P. Your arrival to the Government sent a message to the public that it was necessary to reinforce the mandate of the capital and seek to regain lost trust, what are your priorities, where do you think more work is needed?

R. For us it is essential to strengthen ties between the Government and citizens. A closer government. We would like to leave as a legacy a city of rights, which strengthened social, political, civil and digital rights. And a safer city. The government headed by Claudia Sheinbaum has been a great government. It is the best Government of all the states …

P. What were you going to say about your boss …

R. I see it from the outside and from the inside, beyond what might seem obvious, but this is where we find the most advanced local policies in the entire country. And the most complex problems always have a progressive treatment.