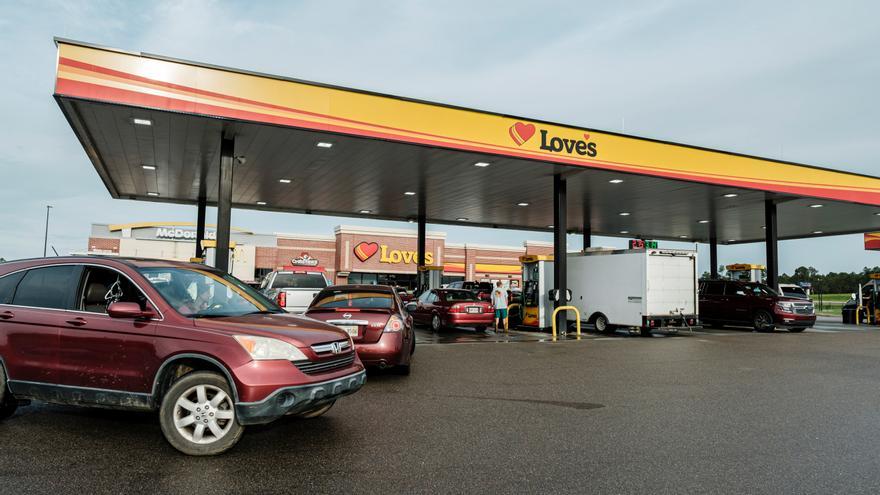 Tens of thousands of residents of New Orleans and the coastal area of Louisiana evacuated the region this Saturday before the onslaught of Ida, which is expected to become an “extremely dangerous” hurricane, with sustained winds of up to 130 miles per hour (209 km / h), before making landfall in the eastern US. Sunday.

With the memory of what happened just 16 years ago with Hurricane Katrina, which devastated the city, thousands of New Orleans citizens crowd the freeways heading north as authorities warn of the danger posed by the rapid strengthening of Ida, which is gaining strength in the warm waters of the Gulf of mexico after leaving Cuba behind and generating winds of 100 miles per hour (155 km / h).

The departure of thousands of people from the coastal area has caused significant retentions this Saturday and fuel has already begun to run short in many points in New Orleans and the rest of a region where a curfew has been decreed in the parroquia of Terrebonne, which is in the possible path of Ida.

The one that will be the first hurricane to make landfall in the US so far this season in the Atlantic account is now less than 290 miles (470 km) south-southeast of the mouth of the Mississippi River, and is anticipated to reach the US coast on Sunday afternoon or evening as a Category 3 or 4 on the Saffir-Simpson scale, of a maximum of 5 and that measures hurricanes based on the strength of their winds.

But its greatest danger is water and, according to the National Hurricane Center (NHC), a “devastating“Storm surge could raise normal sea level up to 15 feet (4.5 meters) in the area of ​​the mouth of the Mississippi.

The National Weather Service in New Orleans warns that storm surge, along with gusts of winds as strong as 150 miles per hour (240 km / h), can leave regions of southeastern Louisiana “uninhabitable” due to high temperatures. “structural damage” that buildings can suffer, “many of whom will be swept away.”

To this should be added large and dangerous waves and large amounts of rain, with build up to 20 inches (50 centimeters) in southeastern Louisiana and southern Mississippi through Monday.

All of this could causer floods and floods in this region, warned the experts, who anticipated that tornadoes could be registered from Sunday until dawn on Monday in this same area.

The mayor of the city, LaToya Cantrell, ordered this Friday the mandatory evacuation of people living outside the system of dams that protect the city against possible floods, and recommended to the rest that they also leave the area or seek protection.

And this Saturday Cantrell said at a press conference that the decision to stay or evacuate must be made “immediately“, because the” time is not on the side “of the citizenship and Ida will arrive very soon, and they must all be prepared before tonight.

No less resounding was the governor of Louisiana, John Bel Edwards, who has warned on several occasions that the countdown to evacuate has already begun and that residents have until dusk this Saturday to be ready for the arrival of Ida, which he anticipates will have “serious impacts” on the state.

Edwards already requested the declaration of the state of emergency, which was accepted shortly after by the president, Joe Biden, in order to assist the region with federal funds and resources.

Biden was informed this Saturday by the Federal Emergency Management Agency (FEMA) on the preparations made and said at the beginning of the meeting that the fact that Ida arrives on the anniversary of Katrina is a “strong reminder” that “everything possible” must be done to help the population to be prepared for the hurricane.

Regarded as one of the worst natural disasters in US history by FEMA, Hurricane Katrina In 2005, it caused the death of 1,833 people and the displacement of almost a million inhabitants, by losing their properties.

The city, built between the Mississippi River and Lake Pontchartrain, it was almost completely flooded when the levees of that lake broke due to the strong winds caused by Katrina, which arrived on August 29, 2005 as Category 3, while Ida is expected to be Force 4.

But now local authorities hope that the multi-million dollar investment made in the containment and pumping system will prevent a possible tragedy on the same day, 16 years later. And they assure that New Orleans is a “very different city in terms of security and infrastructure” relative to what it was 16 years ago.

Louisiana is a region used to the onslaught of these powerful tropical storms. Ida also comes almost a year after Laura made landfall on August 27, 2020 as the strongest hurricane on record in this state, with winds of 150 miles per hour (240 km / h), and left about 40 dead in the US

Now comes Ida, which previously passed through Cuba this Friday, when it made landfall as a hurricane from category 1 and crossed the country at its western end without fatalities being reported so far.