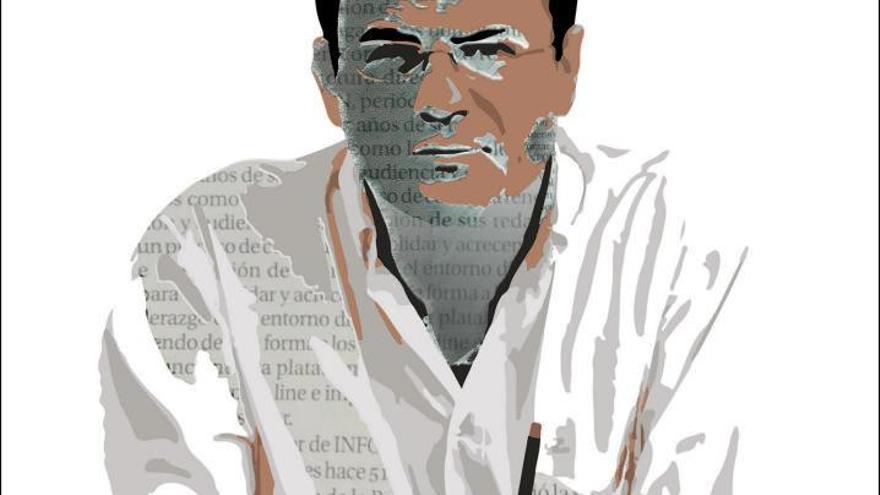 Born in Daya Nueva in 1939 in the bosom of a humble family dedicated to agriculture, and grandson of the mayor of that Daya at the beginning of the last century, his mother married Francisco, an Almoradian with whom he had five children -two women and three men – who survived the harsh postwar times as tenants of farms to live on what the land gave and from a small shop that the father created with a brother.

Joaquín, the fourth in the offspring, a good student, entered the seminary in Orihuela when he was 12 years old, but when he reached the age of majority and with a scholarship approved by the Ministry of Education and Science to study Philosophy and Letters in Salamanca or In Comillas he understood that he did not have the necessary vocation to direct his steps towards the priesthood and, the first great test of honesty, he renounced the state subsidy that covered the expenses of the career towards the Bachelor of Arts so that it could be taken advantage of by whoever was called to show off habits.

At that point, Rocamora’s mind was photographing a future home, surrounded by children, a circumstance that soon happened when he met Fina, a young Dayense who became his wife at the age of 27.

Given that, he focused his professional future towards teaching, a career that culminated on his own and in two years, stealing hours of sleep so that the effort would shorten the path of the three courses and the revalidation necessary to graduate.

Similarly, he did not take long to approve the opposition that granted him a teaching position in Monforte del Cid, where he spent eight years, and in Alicante, where he asked for a place and continued teaching for the next nine years.

However, the change of professional address comes in Monforte thanks to some friends who propose to enter the business world. There he created the Rural Catholic Action Movement destined to reactivate rural consciousness under Christian and humanist guidelines that began to try to solve the serious problem of water supply that the area suffered.

In this way, he began his nexus with companies linked to offering information on wells, convinced that a town that depended on a few caciques to have water at the price they set could not be able to prosper.

From there came the opportunity to create and lead a Board of Directors of Aguas, made up of accredited people from Monforte, who prevailed in elections and took possession of a management that began to offer 500 liters per second to irrigators instead of 50 that they received until then.

That initiative generated more relationships with the business and construction world, which were consolidated in his move to Alicante, where he continued to teach in a public school in the Los Angeles neighborhood until he created the AguaRíos company with some partners with the purpose of build urbanizations and act as a promoter.

At that time, his vision was focused from the first moment on the Playa de San Juan, at that time little exploited, with the conviction that the Alicante-born man had a second home in that area to enjoy the summer among his preferences.

This is how the Azorín, Chapí, Gabriel Miró and Jorge Juan urbanizations were born, all baptized with the name of illustrious people from Alicante, under the tutelage of Rocamora and his partners, Gonzalo Gallego and Alfonso Torrejón, who acted as advisor.

Little by little, the name of Joaquín Rocamora begins to generate confidence in Alicante, whose business community urges him to join Provia as general secretary under the presidency of Paco Sala. That stage was the prelude to, again pushed by a large business sector, he acceded to the presidency of Coepa.

Meanwhile, he decides to join Jesús Muñoz and become part of the shareholders of Alicante Urbana, a company created by Muñoz that also includes Mariano and Fernando Andrés (father and son), Pepe Tortosa and Paco Giner (Famosa) and Antonio Vicente ( PanamaJack).

From there Bonalba arises, an urbanization distributed between the municipalities of Busot and Mutxamel, Muñoz’s initial idea that Rocamora completes by adding, among other things, the golf course project, an initiative that relaunches the promotion.

That and other details marked the differential fact of the dayense’s works, aware that he had to offer something more than the others to successfully complete any of the projects he undertook.

Years later, with the arrival of the crisis and the generalized stoppage in the sector, Joaquín decides to continue his path together with Rafael Martínez (CHM) and Paquita Bonmatí, with whom he created the Parque Mariola Group, which focuses its focus on Pau 5 , today the most sought-after area in Playa San Juan.

In the same way, he joins forces with Juan Alcaraz, former owner of GoldCar, founder of Alibuilding, with whom he has started a promotion in Polop of 185 villas, plus 400 newly designed apartments in Bonalba, with which he has already added about 15,000 homes since took its first steps in the construction sector.

The business success of the dayense has gone hand in hand with his concern in the defense of Alicante. Along this path, in addition to holding positions in Provia and Coepa, he founded Ineca, an institution with private funds to show, through professional studies prepared by experts and by the University, that the province of Alicante is underfunded, at the tail of the territories of the country in terms of return of goods in the general budgets.

That has also been the commitment of Joaquín Rocamora, an octogenarian from Alicante with a youthful spirit, who today continues at the foot of the canyon, without missing a single day at his office, enjoying, yes, that agriculture that he has carried inside since he was a child in a small Torrellano farm. Rope is left for a while.