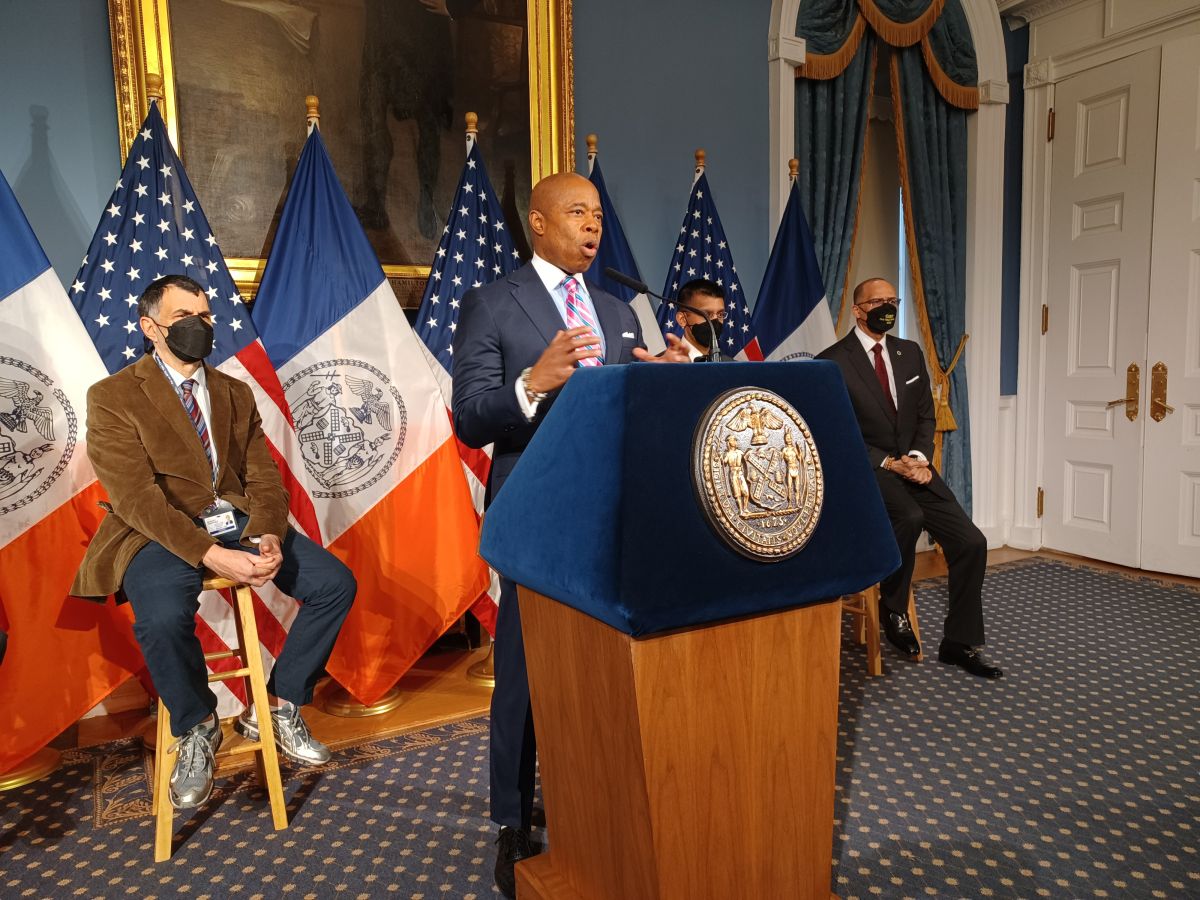 Amid pressure for the New York City public education system to move to virtual classes due to the wave of COVID-19 cases, Mayor Eric Adams cleared up doubts on Tuesday: “Schools will remain open, we are only exploring the ‘online’ option for students who They are isolated because they are infected.

There had been much speculation in recent days about a likely more comprehensive virtual learning mandate under pressure from student strikes, educator protests and demands from teachers’ unions, who collectively reported being overwhelmed by the fury of the omicron variant of the coronavirus in school settings.

“I don’t want there to be misunderstandings. Our school buildings will remain open. We will not do anything to prevent our children from attending the classrooms. We determined from the first day of my government that we would not close”, the Mayor highlighted.

Attendance levels since students returned from winter break have been lower than usual. On average, until last Friday, the school absenteeism was approximately 35%.

The reasons that have driven loneliness in some classrooms have all been associated with the pandemic outbreak: fears of parents and representatives, sick students and teachers, in addition to the closure of the service of several Subway service lines due to lack of personnel.

For his part, New York City Schools Chancellor David Banks was adamant that any conversation with unions and the school community about the possibility of remote learning will address how students affected by positive COVID-19 tests. , who need to stay home for a week or more, Some activities can continue online.

“We want to reiterate to the parents and representatives, that the safest place for your children to be during the dayIt’s the schools,” Banks stressed.

“We have detected cases in time”

The City has facilitated since the beginning of classes, 4.5 million home test kits, which have so far yielded just 25,000 positive cases. In addition, they have doubled the PCR tests in the school community.

“This free testing massification strategy has allowed us to detect cases in time and prevent expansion. Along with vaccination campaigns and the use of masks, we have stopped the spread of COVID-19 in our schools”concluded the municipal manager.

Spokespersons for the United Federation of Teachers (UFT) that represents the city’s public school teachers, who had been pressing since January 2 for the transition to remote education, assured that they continue to discuss other distance learning programs, but for certain groups of students.

In this sense, the Puerto Rican teacher Miguel Padrón, who teaches at a high school in Upper Manhattan, said that last Friday in his classroom 45 students only attended six.

“Since the year began, attendance has been very limited. Even from the teachers themselves, who, like my case, were sick.”

The scenario of ‘online’ classes for children and young people who report being positive for COVID-19, implies for some teachers such as Padrón, a “double work”

“We have already done it. Students who do not come to class because they are positive we have to evaluate them and send homework. We usually do that when we leave school. In other words, for us that means working many more hours”, reasoned the teacher.

Also Read  Everything that is known about omicron

However, Dominican mother Teresita Ferrer, who has two children in the school system, says that after New Year’s, at her home in Inwood, “everyone was sick”.

“My husband and I fell with COVID-19. Although the children’s kits did not reach us on time, we felt that the responsible thing was to leave them at home. They had no symptoms, but were obviously exposed. It will be next week that they start”, shared the islander.

According to the balances of the Health authorities there are “good news” in the midst of the battle against the pandemic this week.

“We see a downward curve of the omicron variant: But we still have more work to do to get to the base. Our seven-day average of daily new cases is now under 20,000. That’s less than half the peak of nearly 43,000 average new cases a day earlier in January.”, reported this Tuesday Dave Chokshi, commissioner of the Department of Health of the City of New York, (DOHMH).

The main doctor of the city confirmed that with the overcrowding of tests and other layers of security, they managed to block transmission chains in schools, that everyone assumed should be higher.

“We have been able to safely reopen schools, when many other large school districts could not. We did it in September despite the Delta variant and with the ‘Open and Safe’ plan from Mayor Adams, we did it again this month with omicron,” the official said.

Similarly, the City shows a decline in COVID-19 hospitalizations from a total of approximately 6,500 patients confined on January 11 to 5,800 as of this Sunday, according to state data.

938,000 students have attended classes on average in the first weeks of January, which means an attendance rate of approximately 75%. Specifically last Friday, 235,000 students did not attend the classroom, but according to the Department of Education, the presence of children and young people on campus will increase in the coming days.