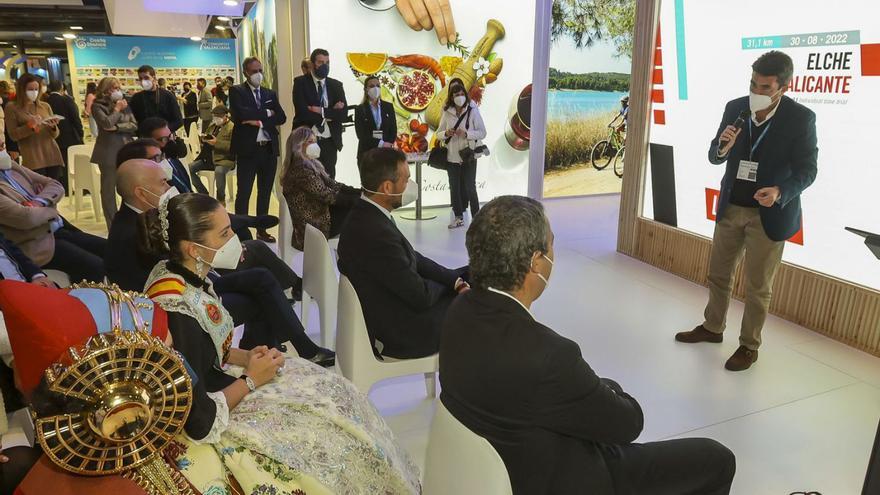 The president of the Diputación de Alicante, Carlos Mazón, presented yesterday at the International Tourism Fair (Fitur) stage number 10 of the cycling “La Vuelta” to Spain 2022, which will be a 31.1-kilometre time trial and has as its origin the Alicante city of Elche and ends in the capital of the province. As detailed, this event, which will be held on August 30, will leave an impact of about one million euros.

This has been announced by the president of the Alicante Provincial Council in an act at the Costa Blanca stand in Fitur, which is being held this week in Madrid, together with the mayor of Elche, Carlos González Serna; the deputy mayor of Alicante, María Carmen Sánchez, and the director of Unipublic, Javier Guillén.

Specifically, this tenth stage of the Cycling Tour of Spain, which will be held on August 30, will be a 31.1-kilometre time trial and will have the Costa Blanca as its setting, starting in Elche and ending in the city of Alicante.

In this context, Mazón has valued the “confidence” of the Diputación with sport, which, as he has proclaimed, is ratified with the celebration of this stage, which will serve to publicize “how good” the roads are in Alicante and as a driving force for the “great pool” of cyclists in the province.

Likewise, he has celebrated that this stage can be carried out on the 200th anniversary of the Diputación de Alicante, thanking Javier Guillén for making an exception in his itinerary for La Vuelta to offer this “great opportunity”. Mazón has also claimed what this cycling stage will generate touristically and economically, underlining Guillén’s statements that assures that, approximately, this day will leave an impact close to a million euros.

In addition, the director of Unipublic has claimed that a large part of the cycling teams choose the province of Alicante to spend their preseason stands there. For his part, the mayor of Elche has also reaffirmed the city’s commitment to sport, especially cycling, which puts the municipality of Alicante “in the spotlight of all cycling fans in the world.” “We will be the world capital of cycling,” he celebrated.

Lastly, the vice-mayor of Alicante has also highlighted the great tourist impact that this tenth stage of La Vuelta ciclista a España will bring, in addition to the great deployment of means that it entails. “It will become your home,” said María Carmen Sánchez.

Valverde: «I want to say goodbye grateful to this sport»

Alejandro Valverde, a Movistar cyclist, declared yesterday that he faces his last season as a professional with the aim of “enjoying” and also with the intention of saying goodbye running with the public and feeling “grateful to cycling” for everything it has given him. At 41 years old -42 in April- Alejandro Valverde faces his last season as a cyclist. It does so with an extensive track record that includes 130 victories, first place in the Vuelta a España (2009), podiums in the Tour de France (3rd in 2015) and in the Giro d’Italia (3rd in 2016) and gold in the Innsbruck World Cup (2018). «I want to say goodbye grateful to cycling, in general, and to my team, for all these beautiful years, but above all I want my health and injuries to accompany me and to be able to run with the public. With that I would be very happy to close such a beautiful career in this sport, “said Valverde.