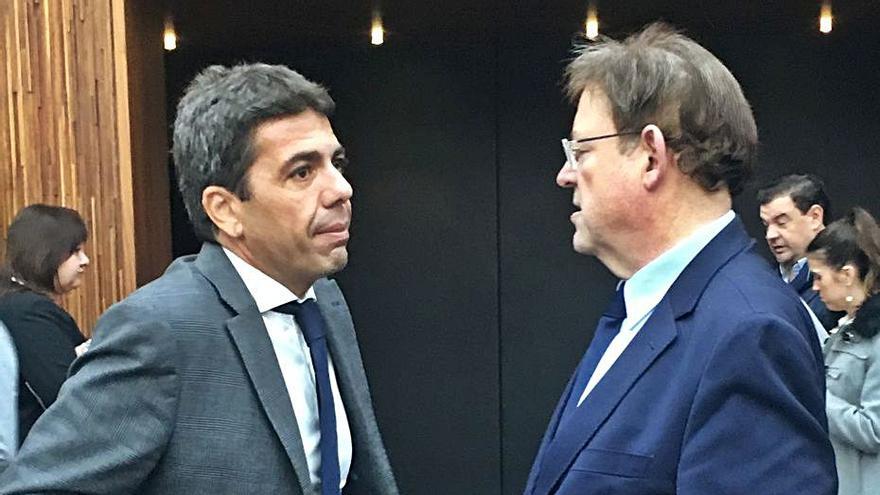 The municipalities of the province have remained during the last five years without entering half of the money from the Cooperation Fund promoted by the Consell due to the refusal of the Provincial Council to approve it, first with César Sánchez and now with Carlos Mazón. It is the only institution in the Community that has declined to join the 13.7 million that corresponded to it. The condition of the Consell is that the money does not have a defined destination so that each population can dedicate it to defray services or current expenses without any kind of justification. And that, precisely, is the main point of friction that has now confronted the institutions again. The Closer plan forces the mayors to justify the expenses and that is not liked by the PSPV.

Carlos Mazón on Thursday opened the door to join this fund through his investment plan, the so-called Closer, which was backed by all groups and endowed with 30 million.

“We are throwing a glove for parliamentary debate, seeking political compromise and non-imposition,” according to the leader, who made an unshakable demand: to give priority to serving small municipalities. This requirement did not represent any impediment to the Consell, which yesterday morning already made it clear that it will accept it because the current fund allows the councils to choose the form of distribution. Although on this point they agreed, the possibility of joining through the provincial program did not convince the Generalitat. The provincial plan went ahead after the change in fiscal rules on the use of surpluses in 2021, distributing the 30 million mainly following population criteria and prioritizing the distribution to the smaller municipalities. It is true that with this program city councils have autonomy and freedom of decision to dedicate resources to current spending or investment, but it is also true that mayors must justify the expenses. The Provincial Council does not have powers to make direct transfers, so the only formula to meet the requirement of the Consell is through the Cooperation Fund. This negotiation is being approached with constant conversations between PP and Cs, who yesterday reiterated their impossibility of including it in the budget for the 24 million that the Diputación assumes with respect to improper powers. Upon learning of Mazón’s willingness to join the Cooperation Fund through his investment plan, the groups on the left harshly charged the PP and Cs for “selling” an old plan as a new one. They want to come in, perfect. But let them bring 13.7 million ”, said yesterday the spokesmen of PSPV and Compromís, Toni Francés and Gerard Fullana, respectively.

The general director of Local Administration, Toni Such, assured that the Consell supports the proposal to distribute more resources among the small towns, but added that “the money must be unconditional and the mayors do not have to justify it.” Also from the PSPV, the spokesman in the Diputación, Toni Francés, assured that “the municipalities do not deserve these entanglements after five years, and 55 million lost”, adding that “the only worthy option left to the president is to make a modification of credit, consign the money and join the Cooperation Fund ». Compromís spokesman Gerard Fullana added that “this is a joke. The reality is no longer important for the PP. They vote for one thing, they do the opposite and they end up laughing at everyone ». For his part, the spokesman for Ciudadanos, Javier Gutiérrez, highlighted the importance of the Provincial Council having financial freedom to join the regional program and appreciated Mazón’s attendance at yesterday’s meeting. As he added, these conversations demonstrate “the willingness of the entire government team to agree.”

The president of the Alicante Provincial Council, Carlos Mazón, participated yesterday, for the first time, in the meeting of the Monitoring Commission of the Municipal Cooperation Fund of the Generalitat Valenciana, where, in addition to requesting the inclusion of the provincial institution, he urged the Council to convene the bilateral commission between the Provincial Council and the Generalitat, which has already been delayed for 14 months. In this sense, Mazón reiterated the need for membership in the Cooperation Fund to be voluntary and not mandatory, an issue that he will propose to debate at the bilateral table between the two institutions. The president will send the regional government for its study the distribution requirements and the technical peculiarities that the Diputación defends in the distribution of funds, with the intention of corroborating whether they are comparable, while requesting to appear in the Cortes to detail this issue, before the future parliamentary debate on the law.

Finally, the institutional head insisted on “finding meeting points to incorporate the Alicante Provincial Council into the 2021 Cooperation Fund.” All these questions will be raised in the bilateral commission between the Provincial Council and the Generalitat, “a forum for dialogue that is necessary and whose first call takes place over time,” said the president. “The Diputación de Alicante wants to present in detail the reflections and interests of the province, prior to the final parliamentary process of the law that regulates this fund,” he stressed. During the provincial plenary session last February, the president already announced the decision of the government team to postpone the presentation of amendments to the draft Law on the Cooperation Fund. This predisposition led to the removal of the amendments from the agenda, as well as to request, by Carlos Mazón, his appearance in the Cortes to present the position of the provincial institution and present the reports of the experts to all the groups at that session. .