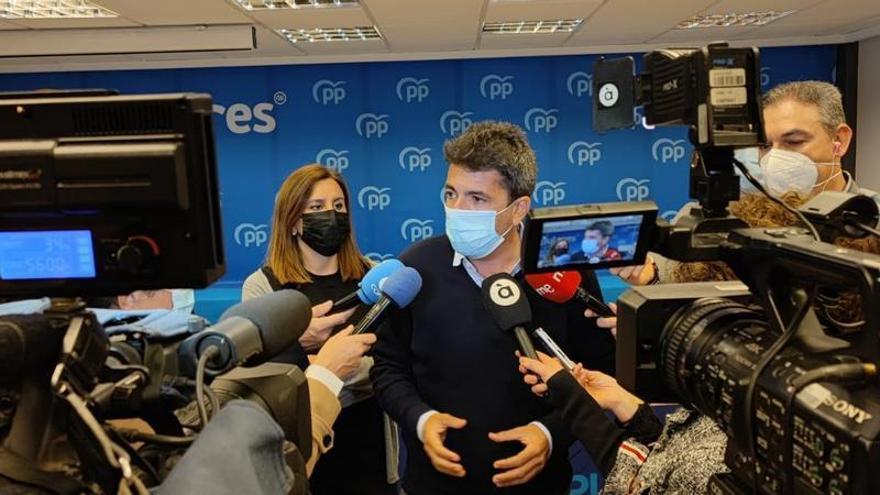 The regional president of the PP, Carlos Mazón, has demanded today the head of the Consell, Ximo Puig, that at the gates of a sixth wave of covid infections, the Generalitat “do not get fat again “with hotels, leisure and restaurants, since, in his opinion, “it would be unforgivable to return to the disproportion of the five previous waves.” Mazón has defended the professionalism with which they work in these sectors and has confirmed that his party will continue to hold mass events that comply with the regulations, such as a Christmas lunch scheduled this Friday in Alzira and also a dinner organized by the PP of Valencia city that On the same day, both celebrations “logically” with restricted capacity, he pointed out.

Since the emergence of the covid, restrictions on hotel, leisure and restaurant establishments have become almost a matter of State, with Isabel Díaz Ayuso as a reference to the right in relation to its policy of keeping business open. Following that trail, Mazón today demanded restraint from the President of the Generalitat and, although he stressed that health comes first, he emphasized that the possible sectors affected “can no longer” due to the consequences of the crisis nor would they “endure new, disproportionate, political restrictions that stigmatize a sector that has done nothing but make an effort and comply with the regulations.” With this, he has called on the Valencian Government to let the blind lift those who do comply and in the run-up to a campaign that “we are going to try to save by the hair.”

“Enough of priming yourself with those who are more drowned than anyone and about to definitively close the blind,” he exclaimed after the PPCV board of directors, warning that from his party they will be “very vigilant” with the decisions adopted by the Ministry of Health. For the leader of the popular Valencians, the hospitality industry is not the problem, but a large part of the solution. In this sense, he has defended that young people are “much more protected in responsible and legal leisure than in spontaneous or even illegal concentrations.”

Mazón has highlighted that hospitality and leisure are “shaking” Faced with the possibility that measures similar to those of the past Christmas holidays will be decreed, restrictions that he has labeled as “targeting” to certain sectors, for which he has demanded that “they do not pay just for sinners.”

The regional president of the PP has tried to sow doubts about how the Generalitat has been decreeing limitations, based on resolutions of expert committees that he has said “that are unknown”, while mayors and councils do not have enough information on the evolution of the pandemic. In that sense, he has charged against what the Botanic Government maintains since, according to him, it is affirmed that the Valencian people are exemplary in vaccination and, at the same time, they question whether they will comply with the measures.

The president of the PPCV has also denounced the “structural collapse” that social policies have in the Community, in reference to the Unit, “when it is known that 35,000 people have died without having had access to help, that of the geriatric or that of the Cercanías rail transport He has also denounced the collapse in health policies, “with 400 new toilets that are on the verge of dismissal” and that are added, he added, “to the 3,500” who were “fired” in the Community Valenciana.To this he has added the risk of the “collapse of the economy”, for which he has urged Puig that all measures be proportionate.

Also Read  Why do you have to keep the car or mobile battery between 20% and 80%?