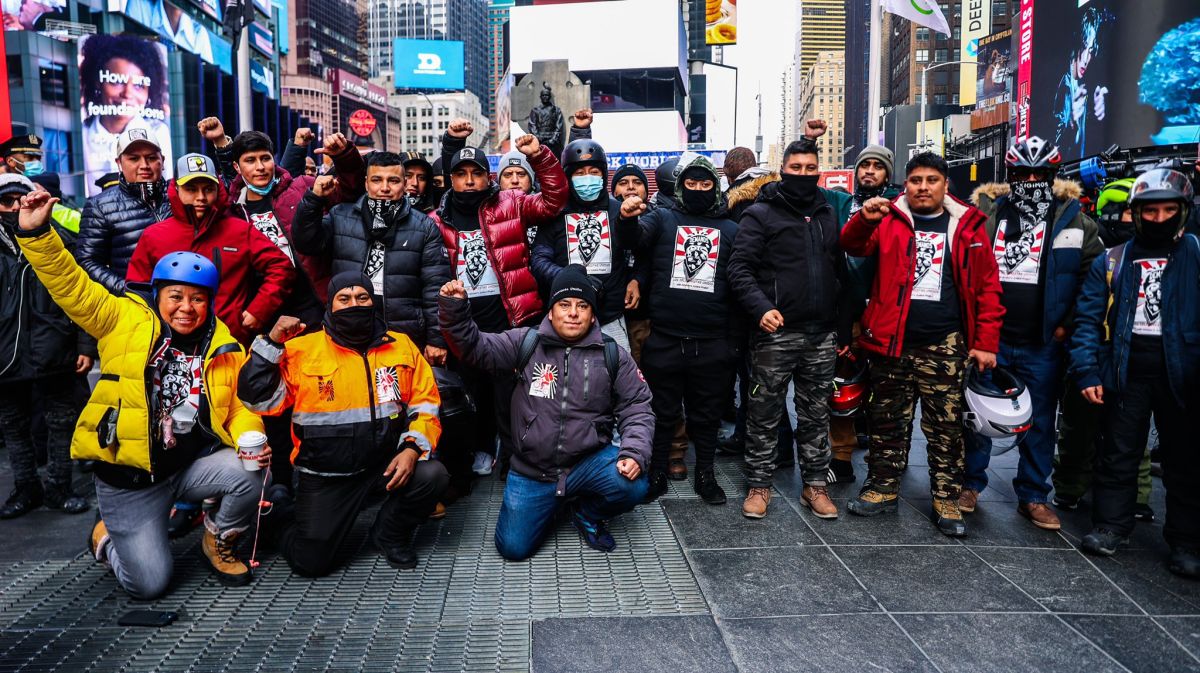 New York.- “United deliverers will never be defeated”, were the words in Spanish with which Congresswoman Alexadria Ocassio Cortés began her speech at the press conference convened this Sunday in Times Square to celebrate that as of Monday, January 24 Legislation comes into force that benefits delivery people.

Under the new law, delivery applications (Apps) must have a license from the city to operate in the five boroughs, and starting this Monday, companies that take orders from customers directly will be required to notify couriers of the amount of tip for each delivery, the total payment and the previous day’s tips. In other words, there will be greater transparency.

For his part, the City Comptroller, Brad Lander, recalled during the press conference that we cannot forget that the ‘deliveristas’ were the ones who kept the city active “during the darkest days of the pandemic.”

“Perhaps some thought that they did not have enough power, but they organized themselves very well to demand the changes that the sector needed. They have shown that they are united and have enough guts (to achieve their mission)”, added Lander.

Federal Senator Charles Schumer was another of the local officials who also accompanied the workers. “In addition to celebrating the new legislation, we also want to educate the public about the needs of ‘deliveristas’ and how we can help other workers make the city fairer and more equitable.”

Meanwhile, activist Ligia Guallpa said: “We would not have made it without the support of many incredible leaders who took this issue very personally. I am very excited to continue working with them to make this change a reality for 65,000 deliverers. And also eager to transform this job into a worthy profession”.

The ‘deliveries’ that serve any restaurant, regardless of whether they do their work through digital applications, will also have new rights from April 22 of this year and January 1, 2023.
With the support of the Worker Justice Project (WJP), app-based delivery workers have been organizing as United Deliverers in New York City for two years.

The result of a chain of protests and mobilizations was the approval of a historic legislative package, which makes the Big Apple the first city in the country to provide essential protections for delivery workers, including the regulation of delivery distance, minimum standards of payment and access to toilets.

“I am so excited that this law goes into effect on Monday. As a former delivery person (before that name came up), this is a huge win, particularly for female food delivery workers,” District 37 Councilwoman Sandy Nurse said on her Twitter account.

Councilwoman Carlina Rivera also expressed: “I am very proud to have fought for this legislation with @workersjusticep (Workers Justice Project). And so grateful to celebrate this victory with our delivery guys, the first of many more to come. The fighting continues”.

Instead, Mayor Eric Adams said in a statement: “With this legislation, we are taking a transformational step to protect these essential workers and also support our city’s restaurants to ensure a fair and equitable recovery for all New Yorkers.”