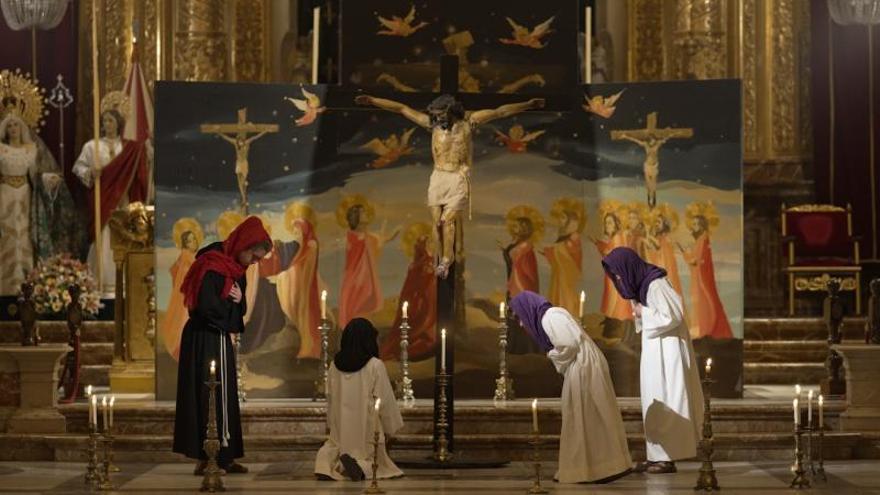 At first it was going to be released in the framework of the last edition of the Festival Medieval but the pandemic prevented it. So we had to wait until this Holy Friday to be able to enjoy the liturgical drama del siglo 14 Planctus Marine which, yes, will arrive in Elche in audiovisual format. As of today, it will be possible to see this representation, which has been produced by the Elche company Maspelícula, through local televisions and social networks.

Planctus Mariae is a liturgical drama contained in a 14th century book that is preserved in the Cathedral of Cividale del Friuli, a small town in northern Italy, which during the Middle Ages experienced its period of splendor.

The drama that premieres in Elche narrates the cry of the Virgin, along with San Juan, María Magdalena and María Jacobe. The only canonical source of the presence of Mary before the cross is found in the Gospel of Saint John (19, 25-27). The dialogue of Mary with Saint John, the beloved disciple, Mary Magdalene and Mary the wife of Cleopas is a story based on medieval legends and apocryphal gospels. It is known that it was celebrated on Good Friday, during the Adoration of the Cross.

Two instants of the recording of the 14th century liturgical drama Planctus Mariae that will premiere today in Elche, coinciding with the commemoration of Good Friday. | INFORMATION

The liturgical dramas were born between the walls of the convents, in which the friars used these works to embellish the liturgy of important celebrations. In principle, they were works intended solely for the religious community. It took a few centuries for the townspeople to be able to contemplate them and in this long process of “popularization”, back in the 15th century, the introduction of the vernacular and polyphony took place, as probably also happened in the Festa of Elche.

19.30. The basilica hosts this afternoon the Misteri concert

The play Seven Words of Christ on the Cross will sound this afternoon, at 7.30 pm, in the basilica in charge of the Capella and the Escolanía del Misteri.

During the Middle Ages, dramas proliferated throughout Europe and expanded their theme, occupying the entire liturgical time, from Christmas to Easter and, of course, also the Assumption of Mary into heaven on August 15. In the production that will premiere this Good Friday in Elche it can be observed how in this drama features, elements, uses and melodies appear that go back to the origins of the Misteri d’Elx and help to better understand it. The Council of Trent would annihilate this and many other dramas, leaving the Festa from Elche as the only witness to a rich liturgical tradition.

The staging, directed by Juan Manuel Cuenca, tries to recreate the life of a 14th century convent, in which the friars stop doing their daily chores to sing the liturgy of the hours. Four of them, three novices, dress in simple clothes that allow them to be identified and prepare to sing before the altarpiece of the convent. The transcription of the sources and the musical direction corresponds to Rubén Pacheco and the work of singing teacher has been carried out by José Antonio Cecilia.

This liturgical drama was going to be staged in the framework of the last Medieval Festival, but it could not be done due to the pandemic. Thanks to the collaboration of the Basilica of Santa María and the support of the Medieval Festival, the project has finally succeeded.

The cast is made up of Diego Pacheco, in the role of Virgin Mary, Celia Segura, What María Magdalena, Marcos González, that recreates María Jacobe, and Javier Cuenca, in the skin of San Juan.