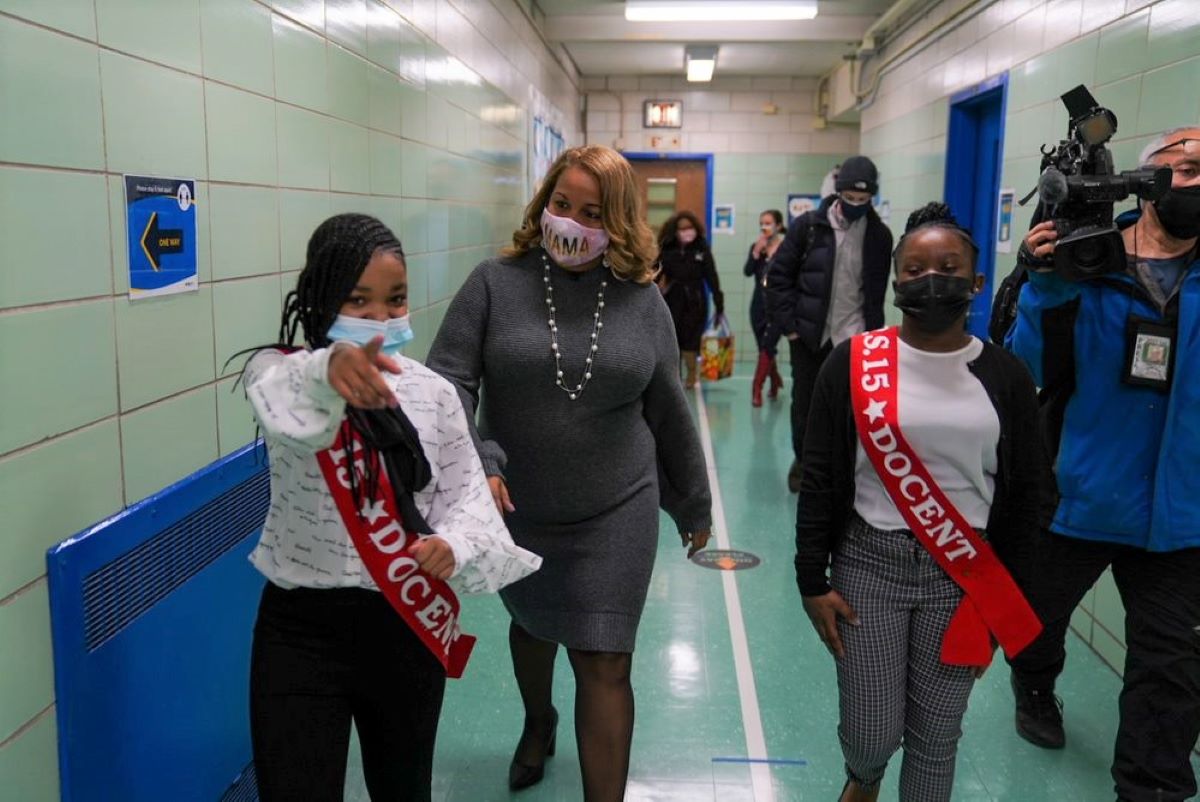 It is Monday March 15, it was the first day of Meisha Ross Porter, as the new Chancellor of Education, and during her debut as head of the schools of the City of New York, the former superintendent of The Bronx, assured that she will have as a priority to work on the return to school of all students, starting next September. At the same time, within his homework plan, he is reconnecting parents and children to the educational system and reviewing the effects of COVID-19 pandema in the learning system to take action steps.

This was stated the new Chancellor of the Department of Education (DOE), who began work visiting the Public School número 15, en Red Hook, Brooklyn, where students from the campus welcomed him. There, in one of the classrooms with 5 Spanish students, he said that he takes the position that left Richard Carranza, “Motivated” and “optimistic”.

“We have to identify the gaps that were left (with the changes required by the pandemic at the school level). Many students were disconnected from the schools and we have to reconnect them, and discover those potholes that there are, “said the new official, who is the first black woman to assume the leadership of the 1,800 schools that make up the educational system of the Big Apple.

Ross Porter was positive that next September, when the next school year begins, there will be a change and it will be possible to return to the presence of the classes, and facing the plan of returning to the classrooms of some 55,000 high school students next Monday, March 22He said that everything is on the right track.

“We are on our way, not just to open (the schools) but to build trust with families and make sure they connect with resources,” said the successor to Carranza, while mentioning that having been a teacher, principal, mother of public school students, and now head of the DOE, she has all the experience to integrate a complete vision that benefits the public educational institutions of New York.

“I am a mother, an educator and I have been in the system in all those perspectives”, Ross-Porter added, who has advocated for his goal of promoting and increasing summer programs for students, which he sees as an opportunity to learn first-hand from students about what they need most in order to return to the classroom.

“In the summer we want to see what multiple students need to summarize that bridge and open in September … we want to give the children everything they need,” added the new Chancellor. “It’s not about me. It is about our history and what we are going to do together to move this system forward. “And because of all that, I know for sure that it is my duty and responsibility that I have carried with me all my life to lead, lean in and watch each student and create opportunities for them at every moment that I can. “

The new head of the New York Department of Education, also stressed that it is important to recognize and thank the teachers and school staff, who have expressed their commitment in the midst of the challenges posed by the COVID-19 pandemic, which currently has a very low rate of contagion, on the order of 0.57%.

The Chancellor promised to address as a priority, all trauma that the pandemic has generated in children and teachers, beyond academic difficulties.

“We will expand learning opportunities and do more to address trauma and academic needs, because we know that is very real,” Ross-Porter said. “And mental health is at the center of that, supporting the socio-emotional needs of our students is at the core of it. And I look forward to doing that work in the new school year, as we move into the next three months. ”

Regarding those students who are currently taking lessons remotely, as well as the face-to-face ones, he said that a goal is that the way of taking the lessons does not sacrifice progress in the curriculum.

“Every child deserves a high-quality, rigorous education in which they see themselves in the curriculum every day.The former director said. “Absolutely nothing replaces the interaction between a teacher and a student in a classroom, and that is what I look forward to making sure it happens (the return to face-to-face classes). But also, really take advantage of the resources that we have been able to put in the hands of our young people and our schools, so that students have access to technology and adults really know how to use and take advantage of that technology to support learning ”.

Parents like José Gómez, who has a 12-year-old boy attending a Long Island City school in person, were hopeful that the new DOE head can boldly address the needs of the current moment on campus.

“Right now one is calmer with the issue of contagions, but I think that now what is coming is the hardest part, which is to get the children who lost so many real classes, because nothing is learned from the computer, can be leveled well“Said the Colombian father. “And it would also be good for this lady to promote more emotional help and psychologists, not only for the children, who with so much confinement turned out badly, but for us too.

Sonia Medina, a Mexican mother of two high school teenagers who are preparing to resume face-to-face classes next week, also welcomed the arrival of the new chancellor and insisted that the poorest children have access to more options for extra programs.

“I wish there were more sports, arts and even science so that the children channel all that energy and vent the anger and frustration that many have, ”said the mother.

The new chancellor was also open to work hand in hand with community leaders and to listen to the voices of the parents.

“Right now it’s not about what the school system will do alone, but what New York City will do together to invest in our children. So to our many advocates and community leaders, I say that we will partner with you to continue to make New York City a better place for all children. I’m ready to get to work“Warned the Chancellor.