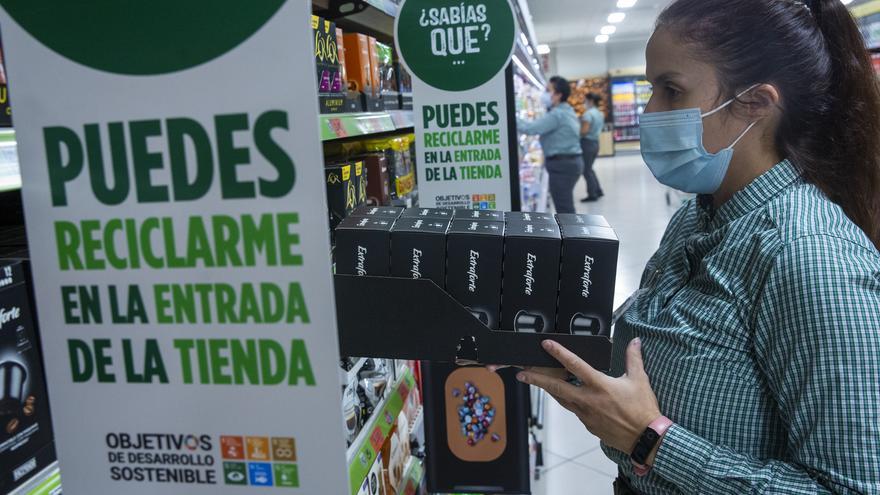 In this first year, the company has already complied with the first two actions of the plan and with the commitment to convert all your centers into stores 6.25. In this sense, the chain has already eliminated single use plastic bags in all sections, which has been replaced by bags compostable (avoiding the consumption of 3,200 tons of plastic per year); and it has also replaced the disposable products of single-use plastic for sustainable kitchenware made with more environmentally friendly materials, which has saved another 3,000 tons.

Regarding the transformation of the stores, which has been carried out in just seven months, Mercadona supermarkets now offer customers information on recycling, new section bags, indicative pictograms on the containers to facilitate proper separation, new bins for recycle in the sections, in the entrances and in the section of Ready to Eat.

In addition, for this new model the waste management system, and has been expanded with the collection of coffee capsules.

It is worth highlighting the company’s effort to develop proper management of the waste generated in the stores. Thanks to the reverse logistics and its commercial packaging management model, Mercadona has been able to recycle, only in 2020, 12,000 tons of plastic film, of which 3,000 tons are reused to make reusable shopping bags, and avoid the use of more than 180,000 tons per year of single-use materials.

As a whole, the reuse and recycling systems already consolidated in the company, its strategies to prevent food waste and redistribution of surpluses and Strategy 6.25, mean that Mercadona recovers annually more than 250,000 tons of recyclable materials that they become raw materials again in production cycles and allow efficient progress, and in collaboration with the Heads -as he calls his clients-, towards the Circular Economy.

The chain began working on Strategy 6.25 in 2019, involving all company workers in the challenge of “Continue Caring for the Planet” and making different processes in the assembly line more sustainable. In this sense, the company has a work team that coordinates all the areas of action of the strategy and is made up of workers from the different processes of the company such as Stores, Prescription, IT, Purchasing, Logistics, Legal, Financial , External Relations and Works.

In addition to the changes already mentioned, the chain has also replaced the plastic bag with a cardboard box in the entire category of Hacendado coffee capsules, in addition to reducing the plastic in the capsules themselves, which represents a total reduction of 783 tons per year. The packaging of the Chocolate Classic Hacendado tablets has also changed from plastic to paper, thus reducing 35 tons; or sandwich bags, previously made of plastic and now made of paper, which represent a reduction of 186 tons. The wand air freshener category has also been modified in its entirety and the change to glass container represents a reduction of 160 tons. There are multiple examples of reduction that the company is promoting, always looking for more sustainable options in its commitment to promoting the circular economy and the reuse of materials and resources.