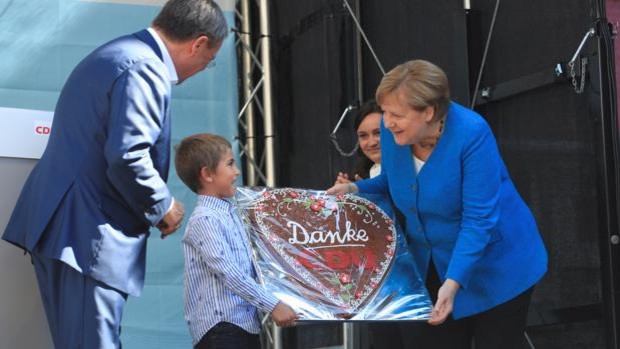 Her sense of humor has always been Merkel’s best secret weapon in the face of adversity. He let out a laugh when Trump, in the worst moment of bilateral relations since World War II, came forward saying he had “German blood.” He came to laugh out loud in 2012, when Greek Prime Minister Samaras solemnly announced that he would also be at the disposal of his team during the weekend to solve the debt crisis. And often that humor is tinged with irony, as when asked if Obama might deliver another speech at the Brandenburg Gate in the future and he replied, “I can promise that the Bandenburg Gate will still be there for a while.” But he attended the farewell ceremony that the CDU held this Saturday in Aachen with a fake smile. The party wanted to stage the greatness of the Merkel era at the seat of Charlemagne’s court and took the stage to some children who presented the Chancellor with a gigantic Lebkuchen, a heart-shaped gingerbread cookie with a decorative pastry chef “Thank you” written in fondant. The picture was comical, but Merkel kept her brow furrowed and her face tight. He parked his complacency to focus on the risk that, in his opinion, Germany runs in this Sunday’s elections. “It is about the stability of Germany,” he insisted, mentioning for example that the country will receive less support from its partners in terms of intelligence cooperation if it does not provide security for itself. He warned against strangling the economy through tax increases, against climate protection at the cost of business life, and applauded candidate Armin Laschet when he spoke of the danger of a left-wing coalition. She knows well what that can mean because she grew up in the GDR. Merkel’s countenance denoted that she is not amused by the situation in which Germans turn out to vote. Because although it is very possible that tonight it will not be clarified who will be the next chancellor and the formation of the government will be involved in long and complex negotiations during the coming months, there are things that we already know about the electoral result. There is no clear majority, the vote is fragmented. Possibly only 7 of the 47 parties that are presented will enter parliament, but the large number of compensation mandates that will derive this time from the double vote per ballot, which are granted if a party obtains more direct mandates than it is entitled to through its second voting result, it will force the number of deputies to increase again. The original number is 598, but in 2017 it rose to 709 seats and some experts predict that this time we can see a Bundestag with about 800 deputies, more chaotic and less manageable than ever. The far-right anti-European Alternative for Germany (AfD), whose parliamentary presence is surely the legacy that the chancellor personally most regrets, maintains 12% in the polls. And the two most likely government coalition variants awaiting results, both the so-called ‘stoplight’ of the SPD, Greens and FDP liberals under the leadership of Social Democrat Olaf Scholz, and a ‘Jamaica’ alliance of conservatives, Greens and FDP with Armin Laschet at the helm, also involve programmatic issues that she perceives as dangerous. The other Germany This Sunday we will not see Merkel go to vote, because she has previously done so by mail, like 43% of the German electorate. Nor will the electoral count continue either at the Chancellery or at the party’s headquarters, because it wants to stay on the sidelines. His next public appearance is scheduled for Monday, at a reception of the German Bishops’ Conference, about to cloister himself in the next session of the controversial ‘Synod Way’. Olaf Scholz, in his shirt sleeves and no tie, spent this Saturday in his Potsdam constituency, chatting and answering as many passersby wished to ask him questions, in true Merkel style. Armin Laschet sucked the chancellor’s wheel in the final sprint to the polls. The Green Annalena Baerbock again avoided talking about her coalition preferences and the liberal Christian Lindner spoke again in favor of an alliance with the Conservatives and Greens. But there is a growing Germany that is not reflected in any of the candidates. The last two activists who have been on hunger strike for four weeks camped out in front of parliament, 21-year-old Henning Jeschke and 24-year-old Lea Bonasera, also declared themselves on a thirst strike this Saturday until the government decrees a ‘state of emergency climatic ‘. They belong to the so-called ‘last generation’ and follow leaders outside the political system, such as Greta Thunberg. In social networks there are hoaxes promoted by circles of Pegida, the German Patriots against the Islamization of the West, who speak of the manipulation of the vote. In the streets of Berlin yesterday the ‘Querdenken’ (Transversal Thinking) movement protested again against the measures that make life impossible for the unvaccinated and that they consider an attack by the political system on the fundamental rights of citizens. Today, while 60 million Germans are called to go to the polls and after the failed 2020 edition due to the pandemic, the Berlin Marathon will take over the German capital again, in a moving metaphor of the Germany that runs towards the post-Merkel era in a competition of resistance, a struggle with itself and an effort to beat the own record of prosperity and stability that the last four legislatures have set.