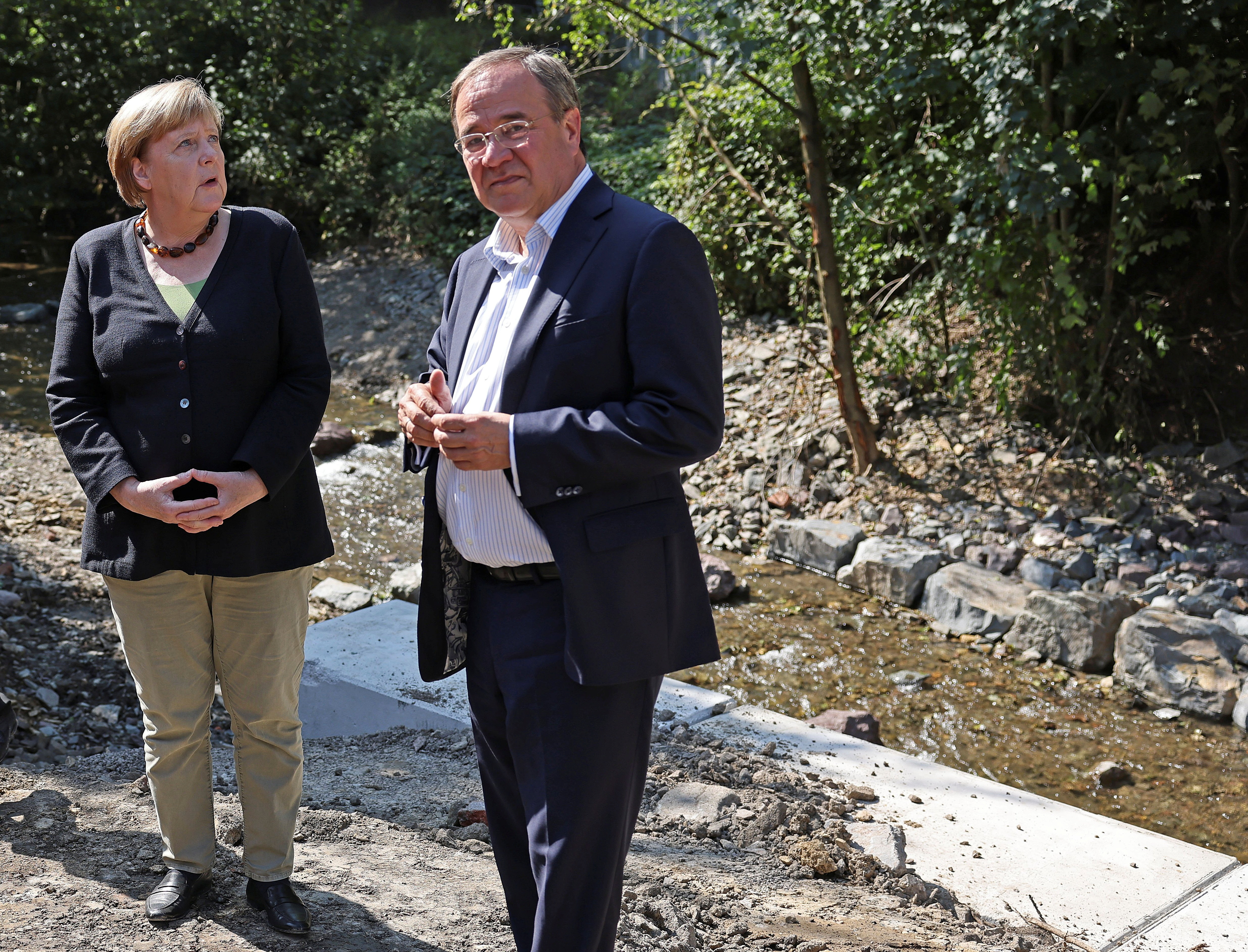 Nervousness grips the German conservatives three weeks before the elections. The party that has had its leader, Angela Merkel, 16 years in power, always undefeated in the elections, now sees how its candidate, Armin Laschet, looks into the abyss of returning them to the opposition. The polls turned upside down just two weeks ago. For the first time in 15 years, the Social Democrats were ahead of the CDU union, the formation of the chancellor, and the CSU, its Bavarian sister party, in voting intentions. That point of difference has already become five according to some polls (25% for the SPD; 20% for the CDU-CSU). Political scientists find several explanations for the disaster, but there is one that stands out above all others: the candidate. Laschet has failed to get voters to see him as a successor to Merkel, the person they would reappear in the Chancellery if they could vote for her again.

Somehow, the three candidates with options have tried to present themselves as heirs of the most relevant European politics of the 21st century. Laschet won the primaries of his party offering an image of Merkel’s natural follower -centrist, focused on Europe, conciliatory and willing to dialogue- in front of another more popular candidate and more inclined to the right, Friedrich Merz. In addition, being from the same party theoretically gave him several points of advantage. However, it has been the Social Democrat Olaf Scholz, Vice Chancellor and Minister of Finance in the Grand Coalition Government, who has managed to appear in the eyes of the Germans as the most merkeliano, the legatee of the chancellor’s style of politics. It has sold stability, governance experience and trust. The Green candidate, Annalena Baerbock, was also perceived as a possible successor for having triumphed in an environment, that of German politics, still very dominated by male figures, but the similarities ended there.

Scholz has taken every opportunity to transmute into Merkel. He has called himself chancellor –The female version, Kanzlerin, of the word Kanzler, chancellor- in her campaign advertising, she has repeated famous phrases of her as “You know me” from a 2013 debate and has been photographed on the cover making the gesture merkeliano par excellence, the formation of a rhombus with the hands at the waist. Laschet, on the other hand, has taken little advantage of his partner in the ranks, who did not accompany him to an electoral event until the end of August. “It is significant that Merkel has found so few words of support for Laschet so far,” says Ursula Münch, professor of political science at the Bundeswehr University of Munich. In that first public act “he limited himself to praising his Christian character. Apparently he thinks that a good candidate would have to be able to succeed without his support ”, he adds.

Olaf Scholz took part in the Süddeutsche Zeitung “interview without words”, in which the interviewee only answers for photos. One of the responses was this photo, making the famous “Merkel lozenge”. pic.twitter.com/khN3L9ff3l

Merkel has remained quite on the sidelines of her co-religionist’s electoral campaign, but this same Sunday, during a visit with him to the regions affected by the devastating floods of last July, she said that she supported him “from the heart”. Laschet presides over the federal state of North Rhine-Westphalia, to the west, the most affected, along with Rhineland Palatinate, by torrential rains that left more than 180 dead and enormous damage. “Who can lead a land how this can also be the chancellor of the Federal Republic of Germany, “said Merkel, when asked by journalists.

The conservatives are taking its toll on the fact that there are now more parties competing with the CDU-CSU in the broad spectrum that encompasses the center and the right, Münch believes. Not only Alternative for Germany (AfD), the far-right formation (which polls give around 12% of voting intention), and the liberals of the FDP (13%), but also the party of the Free Voters (Freie Wähler in German), who could outperform the CDU-CSU in some Bavarian territories. 56% of citizens want conservatives to go into opposition after the elections, according to a Civey poll published by the newspaper Augsburger Allegemeine.

The expert believes that the main explanation for the sinking is Laschet’s weakness. The conservative emerged victorious in an internal fight for the candidacy against Markus Söder, the popular Bavarian leader of the CSU, but was quite touched in the eyes of the public opinion by the mere fact that his party doubted his abilities. Now Söder, who formally supports him, hints at how he is running the campaign. Laschet was also hurt by the widely circulated image of him laughing in the background as German President Frank-Walter Steinmeier expressed his condolences to the flood victims. Many voters have also not forgotten the recent commission collection scandals by CDU-CSU deputies who brokered the purchase of masks during the first wave of the pandemic.

As Scholz concentrates on not taking missteps and continuing to ride the wave of favorable polls, Laschet has had to go on the attack. This week he presented a “team for the future” of eight people, seven politicians and a scientist, with whom he would form the hard core of his hypothetical government. In the images he appeared surrounded by all of them, symbolizing that he has the best of the game behind him. It has also hardened the speech.

On Saturday he intervened between ovations at the CDU congress in Brandenburg and his first words were to launch a warning to the center voters among whom Merkel had so much success. He reminded them that Scholz does not exclude a pact with Die Linke (The Left), the post-communist party calling for the dissolution of NATO. Despite having lost a lot of support – the polls give them between 6 and 7% of the votes, when in 2017 they got 9.2% – the formation could allow a government of social democrats and greens that now does not add up. Alerting against this alliance of the left has become the leit motif of the conservative campaign.

Scholz reaches out to the Greens to rule Germany

His preferences were known, but Olaf Scholz, the Social Democratic candidate for Angela Merkel’s succession, has decided to be explicit amid the debate on possible coalitions to form a government after September 26. In an interview published this Sunday in the newspaper ‘Tagesspiegel’ he stated that he would “like” to agree to an Executive with the Greens. The environmental education is in third place in the polls of voting intention. It has been stable for several weeks around 16-17%, close to the conservatives, who are around 20-21% in the average of the polls. Far is the momentum achieved by the Greens in April, when they announced their candidate, Annalena Baerbock, and took the lead in the polls.

Scholz’s statements coincided with the publication in the tabloid daily ‘Bild’, the most widely read in Germany, of a nearly blank page on which an interview with Baerbock was supposed to appear. The newspaper thus denounced that it had not been granted, apparently due to lack of time. “The candidate for chancellor of the Greens could have explained here how she wants to govern, how she thinks, what values ​​she defends,” the text said. Next Sunday the publication plans to publish an interview with Laschet and the next with Scholz.

“I have already worked with Los Verdes in various governments, in the federal government and also in Hamburg. [donde Scholz fue alcalde]”, Said the Social Democratic candidate this Sunday about his preference for this formation. “We have different goals, but much in common,” he added. Experts predict arduous negotiations in many bands after the elections because according to the polls a tripartite will be necessary. In the case of an alliance of Social Democrats and Greens, the third partner could be the Left or the liberals of the FDP.