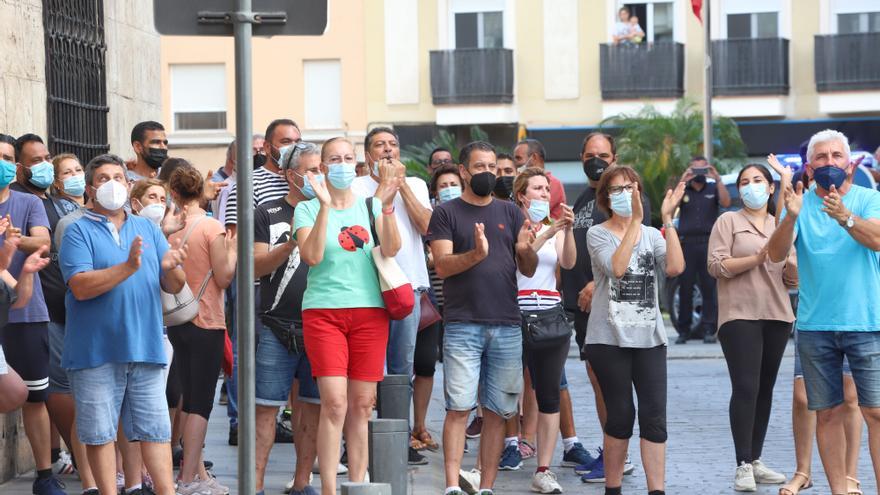 Few have been the stalls that have been installed today on Avenida del Marqués de Molins in front of the merchants’ establishment. Tony Sevilla

The merchants, angry at not having received prior notice, have decided not to set up the stalls and move to the City Hall where fifty street vendors have staged a protest. Four of them have been received by the Councilor for Markets, Victor Bernabéu, which has transferred to them that he was unaware that the Local Police were going to carry out that ban today, although he has clarified that the agents were doing their job and enforcing the regulations. The protest has accelerated the plans of the Department of Markets that planned to modify the ordinance and, today, has made its change public, opening a period of 15 days for allegations.

The new ordinance that the City Council intends to approve modifies the assembly schedule of the stalls in the 11 markets of Orihuela, which would be divided into two seasons: in summer, the market will open from 7.30 am to 1 pm and in winter, from 8 am to 2 pm. Vendors will be able to set up their stalls an hour and a half before the opening, that is, from 6 in the morning in summer and from 6.30 in winter. “It is unfeasible to open the market at 9 in the morning and start riding at 7:30, there is no time,” acknowledges the mayor. Bernabéu has also committed to the merchants to seek a solution while the modification of the ordinance is processed, since it will not be in force for about four months (after the public consultation it will be taken to the Governing Board to later approve it in the full, when a period of 3 months of allegations will be opened). It will try to get the Local Police to make a legal report that endorses that merchants can ride before the time established in the current ordinance.

Bernabéu has given his support to the merchants with whom, he has said, “empathizes” and has added that his area has been working for weeks on modifying the current regulatory ordinance of Non-Sedentary Sale because “there were deficiencies”. “The modification of the ordinance is completely drafted,” says the mayor, who has announced that, in addition to the assembly and opening hours of the souks, the organization of the different sectors (clothing, food …) will also be changed.

Few have been the stalls that have been installed today on Avenida del Marqués de Molins in front of the merchants’ establishment. Tony Sevilla

Criticisms of the opposition

For her part, the PSOE spokeswoman, Carolina Gracia, has questioned that the Markets area already has a draft with the new ordinance «which will be taken to the next plenary session when we had one a week ago and nothing was said about it, just as we did not see any resolution from the Councilor for Citizen Security that agreed what has been done today, We believe that this response is nothing more than an easy way out of merchants’ complaints. but we hope that now they fulfill it ». Grace asked that, if the text is prepared, the local government convene an extraordinary plenary session as soon as possible to speed up procedures “as soon as possible”. The mayor criticizes that “it is incredible that neither from the markets council nor from the Local Police anything has been communicated to the merchants who today have had losses that the City Council is not going to give them back.”

Gracia has indicated that “it is clear that the government has to offer a solution to these people who have also not had any municipal subsidies during this pandemic and now that the epidemiological situation allows the markets to see activity again. trouble. It is not serious that they have been assured that they will try to make the measure more flexible from the police ”. From the Socialist Group they have concluded by stating “it is not profitable for Orihuela to have two governments, it is clear that each time the dialogue between the government groups is less but those who lose are always the citizens, now is the time to support the merchants and their families, so we hope that at least during the time it takes for the modification of the ordinance both one group and the other will assume their powers and provide the necessary measures either by decree or by resolution that guarantees market activity in our city ” .

Merchants at the door of the Orihuela Town Hall Tony Sevilla