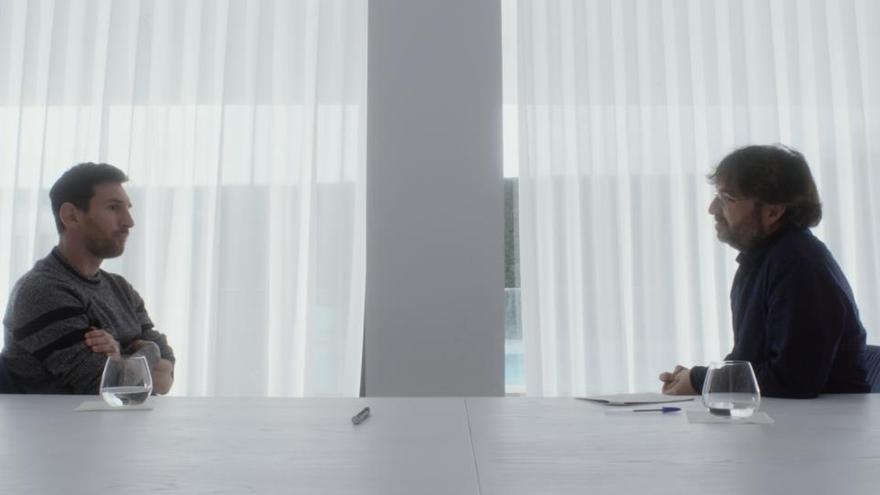 The Argentine Leo Messi, captain of Barcelona, ​​assured in an interview in La Sexta that If he has to leave the Barça club on June 30, he would like “it to be the best way” and admitted that he always had “the illusion” of enjoying the experience of living in the United States.

Messi, who was interviewed by Jordi Évole, was cryptic about his future: “I don’t know if I’ll go or not and if I go, I would like to leave in the best way. Hypothetically speaking, I would like to return one day, I would like to go back to the city, to work in the club, to contributeThat nothing happens, that Barcelona is much bigger than any player and that hopefully the president who comes will do things well to lift important titles again. ”

He did want to remember that he has the illusion of “the experience of living in the United States, of living that League and that life “, but he clarified:” Then if it happens or not, I don’t know, because it is not a now or in the future and that is why I say about returning. ”

He says that he feels everything for the Barcelona shirt. “Barcelona is my life, I came here from the age of 13, I grew up both in the club and in the city. I’ve been here longer than in Argentina. The club formed me as a person. I have a love relationship with Barcelona, ​​with the city, the club … My children were born here, “he insisted.

He stressed that the former president of Barcelona, Josep Maria Bartomeu, “deceived him in many things” for “several years” and that he asked him to leave Barcelona six months before the end of last season. “Now I’m fine. I had a very bad time all of the summer. Before because of how (the season) ended, then the burofax came and then I dragged it during the beginning (of this campaign). I still want to fight for everything that comes, I know that the club is going through a very difficult time. Everything that surrounds Barcelona is difficult, “he said. believes that Barcelona, ​​economically, is “really bad” and considers that “it will be really difficult to get back to where we were.”

Admit that lately he has cried but not for sports reasons, although he assures that he “suffered a lot” with them and revealed that on some occasion “he should have gone” to the psychologist. “I have never been. Antonella insisted that I go, but I keep everything to myself and it never goes away. It would do me good, but I don’t,” he assured.

Messi affirmed that when he sent a burofax to Barcelona asking for his departure, it was a way to “formalize” to “make official” that he wanted to leave. “I had been telling (Bartomeu) in the last six months that I was leaving, I asked him to help me. Sending the burofax was saying that I wanted to be serious and for the whole world to know, “he said.

The Argentine considers that he had completed a cycle and that his head and himself needed a change, also because of everything that was coming. “I knew that a year of transition was coming. I wanted to continue fighting to fight for the Champions League, for the League and I felt that it was the moment of change. The president started leaking things, so that I was the bad guy“he added.

Admit it was “a difficult decision to make, horrible“, because” it was not easy to say that I was leaving the club of my life “, because” there is no better city than this “, also because his family” did not want to move “, but admits that” he felt it was the best, he thought that it was time, that a cycle had been completed “.

Asked if the straw that broke the camel’s back was the departure of Luis Suárez to Atlético de Madrid, Messi said that he had nothing to do with it, because he had decided before. “It seemed crazy to me what they did with him, because of how they did things, because of how he left, because he left for free, and to a team that was going to fight for everything with us, “he added.

He admits that there was not a “one click” moment in which he decided that enough was enough: “It’s quite a journey. You know this club well and the last year was tough, we had not won and the previous years were difficult because of how they eliminated us in the Champions League. There are many circumstances, not a click“He commented that if he went to trial with Barcelona he was convinced that he could win, because he was” right “, but he did not want to end the Barça club in that way.

On the pandemic and playing on empty fields, Messi says it is “horrible”, because “everything is very cold, it is ugly and the feeling is very bad” and “that is why the results are given.” In addition, he also criticized the compressed schedule: “What matters is to play and comply with television contracts and with sponsors and do not think about athletes, it is looked at more for the economic interest than for the sport or for the game itself“.

Messi assures that he does not play to be “the best in the world”, but “to win and to give the best” to his team and the best in each game. “I do not play to show off or to be said that I am the best,” he said. He admits that he has spoken with Pep Guardiola, but not in terms of the future, and described the City coach as “the best” he has ever had because “he has something special.” “I was unlucky, in quotes, that I had a lot of time with Guardiola and Luis Enrique, the two best. I grew a lot in football and in tactical wisdom. I thought I knew everything with Guardiola, and Luis Enrique taught me other things, “he insisted.

Regarding Ronald Koeman, Messi believes that it was “a great success” to bring him to Barcelona and that they are doing “things very well, with new, young people and the team is growing.” He also spoke about the upcoming elections to the club’s presidency and confirmed that he is a member of the entity, but does not want to position himself: “Imagine if I say …”. “I hope that the one who grabs (the club), changes the situation. The situation is very difficult and it will not be easy to turn everything around. Hopefully whoever wins, puts Barça back where it deserves, because today it is not. “Curiously, Messi revealed that none of the candidates has spoken with him.

In any case, Messi, despite the fact that from next January 1 he can negotiate his future with any club, admits not having “anything clear” what he is going to do. “Until the season is over I will not decide anything. The important thing is to think about the team, get titles and not think about other things, “he said.” I’m going to do the best that is for me and for the club. I handle myself with my heart and my head. I’m going to live in Barcelona and I want to be in the club in some way. Try to contribute in what I know, “insisted the Argentine, who he ruled out signing for Real Madrid – “it’s impossible” – or for Atlético de Madrid.