At dusk on November 30, 2020, an armed commando arrived in the Mesa de Torrecilla village, in the mountainous territory of southern Durango, in search of the community member Refugio Ramírez Aguilar. According to the witness account, the man took advantage of a confusion to escape through the mountains, but instead they took his elderly father, Jesús Ramírez Carrillo, who is still missing.

That kidnapping in a village of the Wixárika or Huichola community, one of the four indigenous peoples that inhabit this corner of the Sierra Madre Occidental, was one of the many collateral effects of a war that has increased in intensity in the last year, in the middle of the pandemic, between the Sinaloa Cartel (CDS) -which has traditionally dominated that region of borders between the states of Jalisco, Zacatecas, Durango and Nayarit-, and the Jalisco Nueva Generación Cartel (CJNG), ready to seize control after expanding from the canyons of the south of the region.

The territorial dispute that the two criminal organizations have maintained since 2019 for control of the region, the hub of the trafficking routes to the north and to the Pacific coast, began to escalate with the policy of non-intervention of the Government of Andrés Manuel López Obrador – “Hugs, not gunshots” – and it worsened during the health crisis. The process of withdrawal of the National Guard and the state police forces finished crystallizing at the end of last year: in October 2020, members of the Jalisco New Generation Cartel They ambushed and killed six Durango police officers and wounded seven more on the route between Mezquital and Huazamota. Since then, the role of the security forces in the area has become almost testimonial.

With the war between the cartels unleashed, the municipalities of the Sierra Madre Occidental have been at the mercy of the powers that be: for years they have been forced to participate in the poppy planting – which has declined with the fall of the opium market -, and in the economy of extortion, but now they are also “invited” directly to join the ranks of the cartels in dispute, as communities of the Mezquital municipality (where indigenous Tepehuanos, Coras, Mexicaneros and Huichols live); The kidnappings of indigenous people and mestizos have increased and new checkpoints have appeared that limit the territories.

In February, the commissioner for dialogue with the indigenous peoples of Mexico, of the Ministry of the Interior, Josefina Bravo Rangel, received a complaint signed by “the native peoples affected” where a count of six forced disappearances is made to the detriment of Wixaritari community members. (the name given to the Huichols in their language), which occurred between November 2020 and the end of January 2021. “Our communities have witnessed the shootings, shootings and combats that have occurred in the area, causing not only uncertainty, but harm to innocent people who pass through the area, which is their home, since before these groups had arrived, ”the document states. According to different sources, the agency conditioned its intervention on the submission of formal complaints of disappearance to the state prosecutor’s offices, but the distrust and fear of the community members has prevented the completion of this process. In fact, they have been left to their own devices.

The same month, the governor of the neighboring state of Zacatecas, Alejandro Tello, sent a request for help to López Obrador, where he said that in the entity “not only is there a health pandemic, there is also an epidemic of violence: adjustments of permanent accounts, disappearance of people, clashes with collateral damage, kidnapping and extortion ”. In his letter to the Presidency, Tello reported that the fierce struggle for territorial control between criminal groups had plunged the State into a security crisis, and that the police reaction force available to them was insufficient in the face of the cartels, which are more numerous and better equipped. “Please don’t leave us alone,” he pleaded.

In mid-March, in the Huichol community of San Andrés Cohamiata, in Jalisco, the communal authorities denounced that the federal government had stopped sending them health and food support due to the increase in violence on the roads of the contiguous valleys, which It resulted in an exhortation to the Government of López Obrador and that of Jalisco by the State Human Rights Commission.

While the municipalities struggle between starvation due to their meager resources and the criminal gangs exert almost complete control over their representatives, the residents cry out for institutional intervention. Or the group that guarantees them peace. The dominance of the territory by organized crime is not new for these communities: for two decades, after the Sinaloa Cartel, under the command of Joaquín Guzmán Loera – and with the alleged permission of the authorities – managed to defeat and return to Los Zetas to their former border in the center of the state of Zacatecas, the “chapitos” maintained a relatively peaceful control over this region. The perverse side of the situation was the normalization of the strength of criminal groups among citizens and the almost complete renunciation of the Mexican state to the monopoly of violence.

But the current dispute over the territory has brought a set of new problems, starting with confusion over who to turn to for justice. Days after the kidnapping of Jesús Ramírez Carrillo in Mesa de Torrecilla, the villagers approached a CJNG paramilitary camp, asking for help. “They denied being involved with the incident, and promised their support to the victims,” ​​reveals an activist. The accusations between the two cartels are crossed daily on social networks: one accuses the other of violence against civilians. In fact, the promise to track down the old community member led to new incursions that today cause displacements from more remote villages in the mountainous area of ​​Durango. 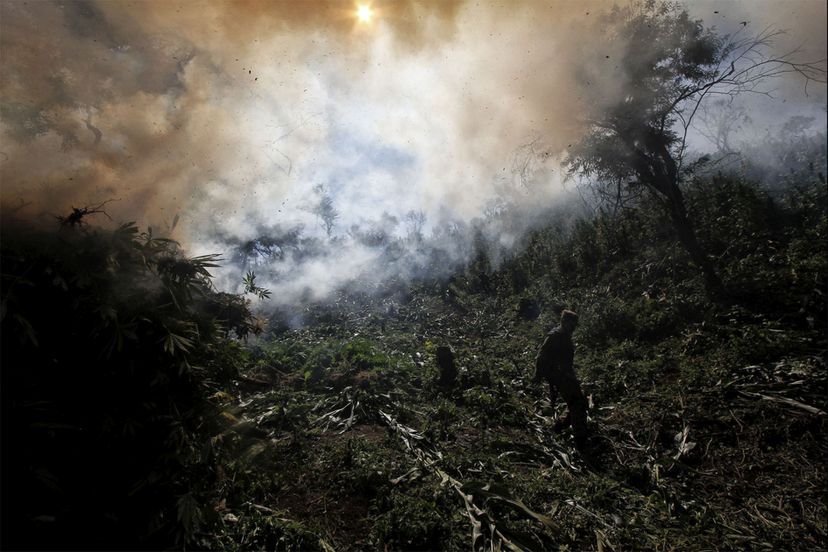 Elements of the Mexican Army destroy marijuana plantations in the mountainous area of ​​the States of Nayarit and Jalisco. | In video, elements of the Jalisco cartel show their weapons and vehicles on social media. (PHOTO: Hector Guerrero | Video: RR. SS)

“The Sinaloa Cartel was not a very predatory organization of society and communities; that has changed with the Jalisco Nueva Generación Cartel and with the changes in the leadership of Sinaloa ”, says Guillermo Valdés Castellanos, former national commissioner of the Center for Research and National Security (CISEN) and author of History of drug trafficking in Mexico. “The other most relevant thing is: what the hell are these guys doing fighting these extreme poverty municipalities?” For the analyst, the incursion of these groups in areas such as the Mezquital valleys, in Durango, exceeds the phenomenon of a typical dispute over territory between the two cartels that monopolize drug trafficking in Mexico: “Just as I had argued that the organizations criminals had become fragmented, diversified and militarized ”, says Valdés Castellanos,“ I see as a hypothesis that they have become lumpenized; that is to say, they are looking for miserable rents in miserable places ”.

The advance of the Jalisco Nueva Generación Cartel in this region, according to the testimonies collected, translates into an increasingly complex domain: the control of the municipal police; the collection of the floor and the right to transfer goods in businesses in the area, such as sawmills and mining companies; and the emergence of makeshift checkpoints that control the passage of travelers in daylight. “In all the towns there are hawks, you cannot pass without being seen,” says a merchant who prefers to keep his name anonymous.

The drama is not limited to indigenous communities. At the beginning of February, in Mezquitic, the largest municipality in Jalisco, Álvaro Madera López, pre-candidate for the presidency of the entity by the PRI, was kidnapped. In March, the State Security Secretariat intervened in that municipality’s police station and detained seven active police officers – including its commissioner – for links to crimes such as aggravated kidnapping, forced disappearance of persons, bribery and abuse of authority. Four of them were prosecuted for forced disappearance and murder.

A few days after the Jalisco Security Secretariat took control of the Mezquitic police station, the page of red note Alert Durango, where it is common to find information about the sending of reinforcements from one cartel to confront another or about the dispute over the Plaza de Zacatecas, spread a message in which anonymous residents of Mezquital said that they were afraid: “We are tired and fed up with the cartel that is in this municipality because there are killings of innocent people every day because we do not want to fight against you, they force us to use weapons without knowing how to use them in order to make their group bigger ”.

Just over a year ago, Selene Galindo, an O’dam (Tepehuana) community member from Mezquital and a specialist in the language of her ancestors, was invited by federal legislators to speak about the preservation of the language. His diagnosis was already grim at the time: “Who will speak those languages ​​when the speakers are being killed?” Asked Galindo. “Speakers are being deprived of everything we name with those languages! And it seems that nobody does anything, because those who fight have already been killed before any local newspaper records it. Our languages ​​are tied to a territory that we can no longer access, to a house to which we can no longer return, to everything that is or was there that we can no longer return ”.

In January, a couple of months after kidnapping the elderly Jesús Ramírez Carrillo, the Jalisco Nueva Generación Cartel struck a second blow against the Huichol community members: they arrived in the town of Tepetates and kidnapped Vicente De la Cruz Díaz and Ambrosio De la Cruz Ferrel. Three days later, the hit men returned to Mesa de la Torrecilla and finally took the sought refuge Ramírez Aguilar, and also his brothers Jesús Ramírez Aguilar and Gonzalo Ramírez Aguilar “while they were performing a traditional ceremony in their family ceremonial center.” says the letter in the possession of the commissioner for dialogue with indigenous peoples. Today, four months after the nightmare began, neither Don Jesús Ramírez Carrillo nor his three children have returned home. The Huichol village has gradually become depopulated. The ancestors and the gods are abandoned, the drought withers the pastures and fear expands, as in other corners of these mountains, its overwhelming silence.