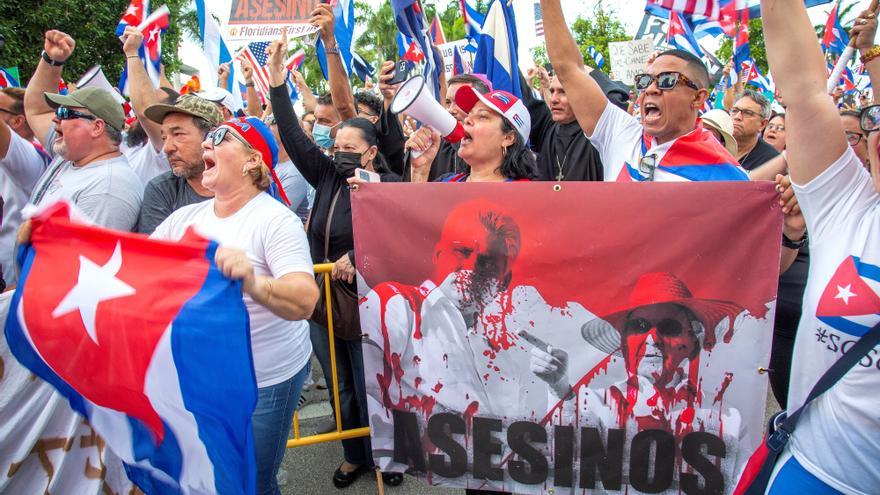 Thousands of people from exile and from the Cuban community in Miami they asked this Saturday to the president of the United States, Joe Biden, and the international community “concrete actions” to regain freedom in Cuba, including a possible “military intervention” to overthrow the communist regime.

Cuban dissident Rosa María Payá asked for “solidarity” with the Cuban population who took to the streets in numerous cities of the island on anti-government protests not seen in decades on the 11th, but asked that this be in the form of “actions and not words”.

Matched her the musician Emilio Estefan, who asked the US Government to speak little and “take action” and urged Biden to travel to Miami to “show his face” before the Cuban community. Because, as Payá said, the feeling of the Miami Cubans is that it is necessary to “act now”, because Havana is a “criminal regime” and with the “dictatorships there is no negotiation.”

Another of the symbols of this large community, the also singer Willy Chirino, took part in this concentration that brought together several thousand Cubans to ask the world not to allow the “flame” of the protests on the island to be “extinguished.” “This has no going back,” he said, excited.

The director of the exile organization Mothers and Women Against Repression (MAR for Cuba), Silvia Iriondo, voiced this request for “concrete and definitive actions”, without ruling out military intervention.

Also Read  La Cova Tallada, the spectacular maritime cave of Alicante for which you need to make an appointment

Actor and singer Jencarlos Canela, also of Cuban origin, asked not to give up pressure on the regime and to support the dissidents on the island now that it has been seen that the Government of Havana “is not invincible.” And he also sent a message to Biden. “You cannot say that something is very wrong and do nothing. This is the time to step up,” he said.

“Biden, your actions are supporting the Cuban genocide” and “Biden, if you don’t intervene now, the Russians will,” read two large posters, which the protesters carried as a reflection of a general feeling among the attendees. And is that among the most popular slogans they were “Intervention” and “Freedom”, but also “Biden responds”, “We want action” and “Assassins”, in reference to the regime.

The appeal was clear. If last Sunday thousands of people came out to Calle Ocho in Miami to instill courage in Cubans to persist in the protests of that July 11 and in the request for freedom on the island, This Saturday’s message was aimed at the US Government and the international community.

BIDEN IN THE DILEMMA

Even if the democrat has not yet revealed the keys to his policy towards this country nor if he will fulfill his electoral promise to restart the thaw with Havana, the protests in Cuba have forced him to ensure that his ideas to “help the people of Cuba” go through a “different circumstance” on the island or a “guarantee that the government would not take advantage of them. ”

Biden was Barack Obama’s vice president when he began a normalization of relations with Havana and everything seemed to indicate that he wanted to return to that path, but what happened in the last week led him to say that “Cuba is, unfortunately, a failed state that represses its citizens.”

But today’s protesters in Miami they want much more than a possible setback in their intentions and they advocated a military intervention already rejected by the democrat Bob Menéndez, of Cuban origin and who chairs the Foreign Committee of the US Senate.

The Miami protest was held on the same day that the Cuban government gathered thousands of people in Havana to show their strength and to somehow counteract the protests against him of almost a week ago in various cities of the country.

THE TOWER OF LIBERTY

And the scene of the rally could not be more loaded with symbolism: the Freedom Tower, an emblematic building that represents for the exile the beginning of Cuban emigration to the United States.

This building, considered a national historical monument, it was the place where Cubans went in the sixties of the last century to regularize their immigration status in the country and thus “get freedom” after fleeing Castroism, and today it wore a huge Cuban flag on its main facade.

This Saturday there were also various marches in cities across the country. If in front of the White House some 200 Cubans asked Biden for tougher actions against the Cuban government, in the New York Times Square dozens of people gathered to demand the fall of the Cuban government shouting “Freedom!”

Also Read  Changpeng Zhao, the entrepreneur who went from preparing hamburgers at McDonald's to being a crypto millionaire