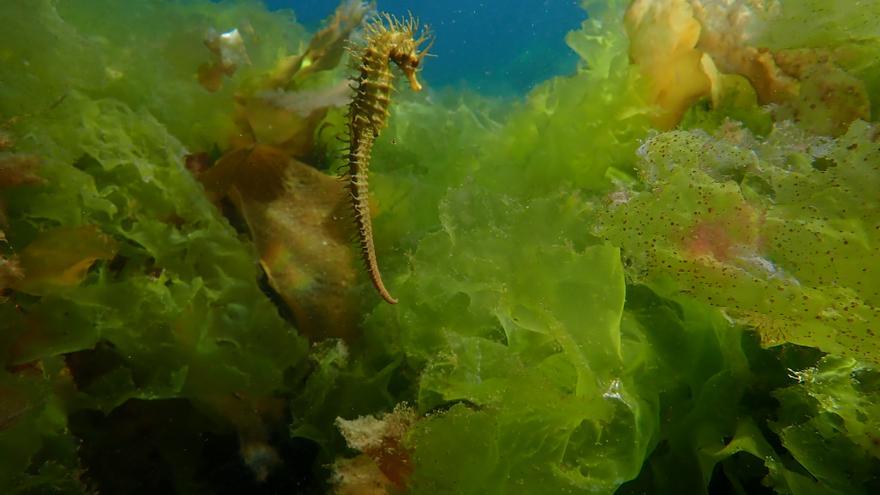 Microplastics (red dots) at the end of a horse’s intestine.

“There was no previous work on seahorses and microplastics and ours provides the first evidence that incorporation occurs through copepods, which are at the trophic base of many species. And it also shows a direct proportional relationship between the concentration of particles in their prey and in the digestive tract of the little horse. It is a preliminary study that lays the foundation for further investigation of potential long-term impacts”, Highlights Jorge Hernández Urcera, main author.

The experts chose the tropical species Hippocampus raids for its facilities for cultivation and the copepod Acartia tonsa, which is widely distributed throughout the oceans and is part of the diet of many predators. And as a contaminant they used polyethylene spheres, whose presence is very high in the natural environment, with a diameter of between 1 and 5 microns (1 micron is one thousandth of a millimeter).

Rocking horses can ingest microplastics in the wild in two ways. An accidental or confused one, since they suck water while eating. And the other, for trophic transfer, that is, feeding on animals that contain microplastics.

The study experiments were carried out at the IIM facilities and with the “great help” of the Aquarium ServiceUrcera thanks. The first objective was to demonstrate whether the copepods ingested the microplastics, so they were fed two different concentrations – 10 and 100 micrograms per liter -, in both cases reproducing the conditions that have been observed in the natural environment.

Also Read  World Vegan Day 2021: the 7 food chains that did deliver on their promise of a vegan menu

Once it was confirmed that this ingestion does occur, the microplastic-laden copepods were dissolved in the aquariums of juvenile specimens with ten days of life and an average length of 1.8 centimeters. These specimens were divided into two groups, with exposures of 20 and 60 minutes.

Thanks to fluorescence microscopy, the researchers were able to trace the microplastics, previously marked with a red fluorophore, both in copepods and later in horses.

“At 20 minutes, the microplastics were found throughout the horse’s entire tract, from the mouth to the anus. But, an hour later, they were located mainly near the anus and, in some cases, forming aggregates. They are animals with a very fast digestion and immediately evacuate what they eat. Our hypothesis is that if these aggregates are formed after 60 minutes because are unable to release microplastics into the environment they can cause an obstruction ”, details Urcera.

His findings are “matter of concern” for the conservation of seahorses, which could also be used as possible biomarkers of the presence of microplastics in the marine environment, since copepods are part of the diet of many species.

“The results are important because microplastics can also act as vectors of other pollutants that adhere to its surfaceand. And this, in the case of the horse, is a major problem. If they accumulate microplastics with adhered pollutants, they could suffer more serious effects ”, he says.

In fact, the experts have started another study, with the collaboration of the IEO of Murcia, to study this impact for the first time. They use microplastics loaded with chlorpyrifos, an organophosphate insecticide, in order to discover how they affect seahorses. “We have done oxidative stress analysis to see if there are effects at the molecular level, but we are still working with the data,” says Urcera.

The first results have already caught the attention of the high impact magazine Science of The Total Environment, which publishes the article on this joint research. On behalf of the IEO, the expert in marine pollution Juan Bellas has participated. And from the IIM-CSIC have collaborated Miquel Planas, head of the group of Larval Biology and Physiology, who contributed his infrastructure and knowledge about the seahorse; and Lucía Sánchez Ruiloba, the head of the Image Microscopy and Analysis Unit. Marta Domínguez López also signs the work, who carried out this research as the final project of the international master’s degree IMBRSea under the supervision of Urcera and Bellas.

Urcera currently works at the IEO, but carried out these studies during his two-year stay as a postdoctoral researcher in the Planas group. Precisely, a few months ago he published another article related to the pipe fish, which belong, like seahorses, to the family of signatids, in the Illas Atlánticas National Park.

Urcera spent time at the Bedford Institute of Oceanography in Canada to develop statistical models from which to generate a prediction map of the presence and abundance of pipefish in the Cíes archipelago.