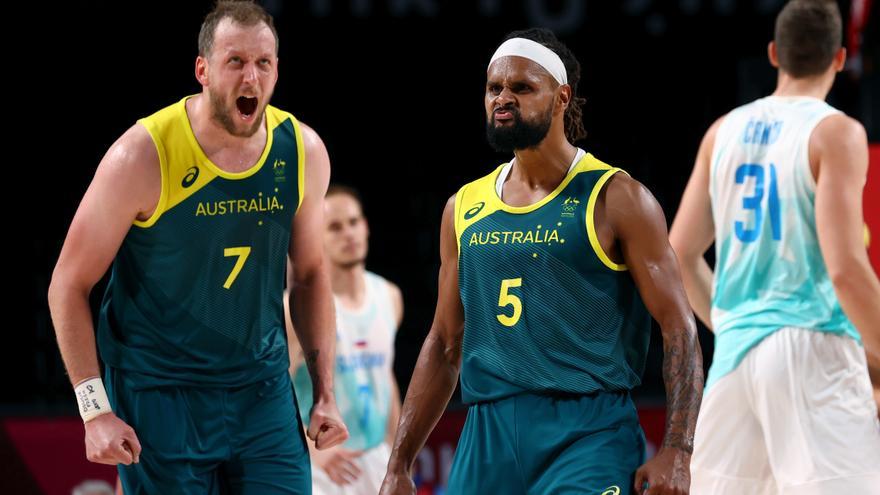 Luka Doncic, one of the stars of these Tokyo 2020 Olympic Games, will go home without a medal because an Australian cyclone called Patty Mills, that with some prodigious 42 points and 9 assists gave Australia the bronze, the first basketball medal in its history (93-107).

At Doncic’s party (22 points, 8 rebounds and 7 assists), the king was Mills. The Australian scored, assisted, fouled and moved how, when and where he wanted. The Australian flag bearer, the first of aboriginal origin in the Olympic history of his country, added the first medal for his team, after losing it in Rio 2016 against Spain.

His feat breaks the beautiful history of the Slovenian teamor, conjured in a prodigious summer to climb from pre-Olympic to glory. He had never lost a game with the great Dallas Mavericks player on the floor, including the Eurobasket 2017, the pre-Olympic and Tokyo 2020, but he broke that streak just in the most important moments: the semifinals and the match for the bronze. In one it was the hand of the Frenchman Nicola Batum with a cap for history, and in another the phenomenal performance of Mills.

Australia started as usual, defending intensely with a zone that advanced three players on the triple line to avoid the Slovenian outside shot, fast in the transition and with English striking (2-9, min. 3).

Doncic, who was not there, already had his pluses and minuses with Dante Exum, but he scored and from one of his frictions he got an unsportsmanlike With which Slovenia turned the game around thanks to a triple by Klemen Prepelic (15-13, min. 7). Australia was not daunted, chained two transitions and a Thybulle steal for an even quarter final (19-20).

It was Mills to pull their own, although the second Slovenian unit resisted with rapid transitions in a full-speed match. The ocean defense was leaking, so it was stopped by coach Brian Goorjian to adjust. It cost them, but they blocked the way for Mike Tobey while Mills was still in his ‘show’: in the 17th minute, 25 points of Australia’s 45 were his (35-45).

Slovenia reacted, but was always opposed by Mills, who both scored and served balls to Jock Landale; and with a spectacular finish from Matisse Thybulle, who first forced a 2 + 1 and then stole to kill two-handed with a spectacular jump. Nor was Doncic happy: a protest cost him the technique, already with the meeting in rest time (45-53).

The Europeans still could not find their leader, well covered by Thybulle, and the game was where Australia wanted: at times running, others looking for Landale inside, who beat Tobey all. Not even when the versatile Slovenian-American pivot hit the triple did he do much good for his team, because then English did it (52-64, min. 25).

Alien to the human, Mills continued in his private exhibition in search of the bronze medal. Yhe was going for 36 points to put his team ten up (62-72, min. 28), while Doncic was desperate to try unsuccessful triples, with only one success of his eight attempts so far. Fortunately for him, Prepelic kept his team and 67-78 seemed even short for Australia at the end of the third quarter.

That it was short was demonstrated by the Slovenians in four minutes, because with a 13-5 run they put the duel in a fist (80-83, min. 33) and with Doncic, it seemed, more in tune. Mills came to the rescue by forcing an unsportsmanlike Jaka Blazic and assisting Exum for the triple, the same one who stole Doncic to hang himself and make it 80-90.

The Slovenian genius put the triple machine to work, but found that the ‘Boomers’ also had firepower to pull, that of Ingles first and Kay later (86-102). Doncic’s medal will have to wait. It was time for Mills, and Australia, an Olympic medalist in basketball for the first time.

Incidents: Match for the bronze medal of the men’s basketball tournament of the Tokyo 2020 Olympic Games, played at the Saitama Super Arena, without public due to the sanitary measures against the coronavirus pandemic.