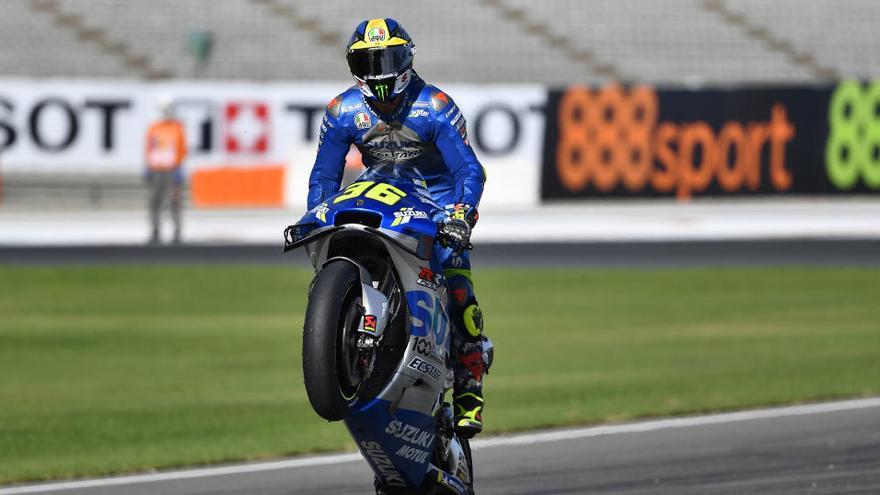 The Spanish Joan Mir (Suzuki GSX RR) will face this weekend your first math choice for the world title of MotoGP with the dispute of the penultimate appointment of the season, the Grand Prix of the Valencian Community that is going to be held at the ‘Ricardo Tormo’ circuit in Cheste.

Mir has 37 points of advantage over the French Fabio Quartararo (Yamaha YZR M 1) and one more with respect to his own teammate, Alex Rins, although the Spanish Maverick Viñales (Yamaha YZR M 1), 41 points away, also have options in this fight. Italians Franco Morbidelli (Yamaha YZR M 1) and Andrea Dovizioso (Ducati Desmosedici GP20), both at 45 points.

Those who are going to have the most difficult time to stand up to him, according to what was seen last weekend at the ‘Ricardo Tormo’ circuit, seem to be the Yamaha riders, whose bike does not “suit” the Valencian track at all, where all of them reaped very mediocre results.

The retirement of Valentino Rossi due to technical problems and the fourteenth place in Quartararo, which suffered a fall, were the most negative or discouraging, although the thirteenth position of Viñales and the eleventh of Morbidelli are not enough to launch rockets.

Ducati doesn’t seem to have it easy either, although if the forecasts of an improvement in the meteorological conditions during the second week are fulfilled by lands of the Valencian Community could be of some help both for Andrea Dovizioso and for Danilo Petrucci in the penultimate race as Ducati pilots.

Dovizioso has acknowledged having had offers from various brands to be a test rider, but the Forlí rider has decided, and thus announced on his social media accounts, that he was going to take a “sabbatical” while waiting for a chance to continue doing what he likes the most, which is to get a place to compete in MotoGP.

With a sports baggage within the reach of few, Andrea Dovizioso would deserve the “finishing touch” of saying goodbye to the season with a victoryAlthough it seems that this “gift” will be very complicated both in the Valencian Community and in Portimao (Portugal).

Those who could have their chance are the Repsol Honda riders, particularly Alex Márquez, since his brother Marc Márquez, still champion in title, has already announced his intention not to return to competition until 2021, as well as the Japanese Takaaki Nakagami (Honda RC 213 V), who once again remained “at the gates” of the podium, which continues to be denied.

Something similar happens with the KTM riders, with Pol Espargaró at the helm, who continues to think of a first victory over the RC 16 as the best way to say goodbye to the Austrian manufacturer before joining the Repsol Honda team next year as a teammate. Marc Márquez.

Pol Espargaró was third last weekend, after the Suzuki, and he will surely look for that “little step” forward in the second race at the ‘Ricardo Tormo’ to fight for victory.

A fall left the “older brother”, Aleix Espargaró, without options, who stood out for his performance throughout the weekend with the Aprilia RS-GP, so the Granollers rider will surely seek to make up for himself in this second round.

The Italian Enea Bastianini (Kalex) and the Spanish Albert Arenas (KTM) will face this second weekend at the ‘Ricardo Tormo’ circuit in Cheste, on the occasion of the Valencian Community MotoGP Grand Prix, defend and extend their meager advantage to in front of the provisional classifications of their respective categories.

The fall of Sam Lowes (Estrella Galicia 0’0 Kalex) the previous weekend gave Enea Bastianini the lead on a tray, who finished fourth, but surely the Briton will try to regain that privileged position after the five podiums, with three consecutive victories, that he had achieved up to that moment and it does not seem possible that any of the contenders will achieve the goal of being proclaimed champion before the last race.

Bastianini and Lowes are barely six points apart, 19 with respect to the Italian Luca Marini (Kalex) and 29 points over the also Italian Marco Bezzecchi (Kalex), so it seems very difficult for either of them to achieve the mathematical difference that guarantees the world title, although both first are the main candidates to achieve it, with the permission of the Spanish pilots.

For his part, with three victories throughout the season and a total of five podiums, Albert Arenas is the pilot of Moto3 who has won the most times in 2020, but his four squares “to zero” in front of a much greater regularity of his Japanese rival, have not allowed him to distance himself in the points table, in which Ogura has managed, without making any noise, to become a real nightmare for the Spanish, although it is not the only problem of Jorge Martínez ‘Aspar’ pupil, who has already been confirmed as a Moto2 rider next season in this same team.

A little further behind Ogura, the Italians Celestino Vietti (KTM) and Tony Arbolino (Honda) and the Spanish Jaume Masiá (Honda) also have mathematical options, who last weekend was one of the favorites to victory, but some bad training condemned him to start from far behind and his comeback ended in a fall.