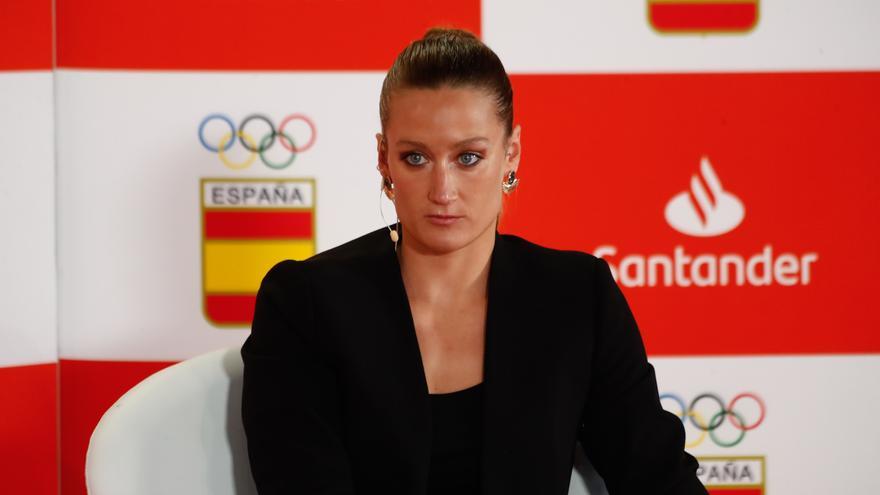 The Spanish swimmer Mireia Belmonte He acknowledged that on a mental level it had been “difficult” to prepare for the Tokyo Olympics due to his physical discomfort, but that “the illusion” of being in the Japanese capital had helped him “not to throw in the towel”, while he did not want to set goals in the appointment, although it goes with “a good preparation” and without demanding “less”.

“It has been difficult because when things are going well we do not realize and when they really go wrong, you have to make that effort to do mental work. In my case, with the help of my mental trainer we have been going through stages of injuries and in the end we have been able to come out in the best possible way, “said Belmonte this Friday during a #SantanderTalks with the director of Events and Sponsorships of the Bank, Felipe Martín .

The one from Badalona remarked that athletes are usually “prepared for the good things, but the bad things cost a little more“” You have to know that there is a goal ahead and this was special, so I had to fight to the end to be there, “he stressed.

“Strength is taken from day to day. Athletes sometimes sin in doing everything when the body is saying one thing and the head another and it is difficult to find balance, but in this case it has been easier because I wanted to go yes or yes to the Games and that illusion has helped me to move on and not throw in the towel“added the Catalan.

Now, it is found “well, physically much better” of his shoulder problems that he has been dragging on for a long time, an ailment that together with two inguinal hernias “from the beginning of the season” have caused him not to compete in the 200 butterfly or to defend his gold in Rio 2016.

Also Read  Outdoor exhibition in Alicante "You see me, in community. Photographers with disabilities"

Anyway, of the three singles in which he is going to compete, the 400 styles and the 800 and the 1,500 free ones, he does not know which one will be the “strong one”. “I have three opportunities to do it well and I do not want to rule out any, the best will be the one that has trained the best or the one that I am in the best that day,” clarified the quadruple Olympic medalist.

“I can’t make a prediction because I don’t know how I’m going to find myself or react. The three are the ones I have swum the most this year and it is true that the progression is quite good in the 400 styles and I would like to be in the final “, he affirmed.

In this sense, it is clear that “the more you focus on a medal, the less things turn out.” “The important thing is to enjoy the road and the day to day. The big job is there and now we have to focus on the small details, I am a prudent person and the first step is to be in the finals. I always put the pressure on myself and I face these Games the same way, I know that I am not empty and that I have done a good preparation. I am not going to demand less because it has not been a perfect year, although I am aware of what has happened, “he stressed.

“I am looking forward to it and for me it is a reward to be at the Games. It will not be a calendar like in Rio de Janeiro, of six tests, but they are three quite tough and the 4×100 styles relay, which I am looking forward to because swimming a relay is special because I don’t have the opportunity to do it with the national team and to see if we can improve the Spanish record, “continued the Spanish.

Also Read  One of the most active cocaine sales gangs in Spain falls, with 16 detainees

Being a standard bearer, an “incentive”

What he will be able to enjoy is an Inauguration Ceremony, since he did not attend the previous ones to compete the next day and this time he will have to do it “obligatorily“Being the standard-bearer with Saúl Craviotto. For this reason,” the parade clothes “are the only novelty in a suitcase full of” emotions “and the” most special “.

Regarding the fact of carrying the flag with the paddler, Belmonte said that they both deserved it and that for her it is so much “a reward for what has been achieved” as an “incentive” for the competition. “Spain is fortunate to have many very good athletes, and for me it is a privilege,” he confessed.

The Badalonese acknowledged that she has not been able to “speak with any of the previous flag bearers”, but that she already knows a little what it can mean by the “mini experience” dand having been in the Mediterranean Games of Tarragona in 2017. “It is not the same magnitude, but more or less it is the same. I do not know if I will be nervous, excited for sure,” he stressed, making it clear that he still has “no idea” of how the parade is going to be.

Another novelty for the award-winning Catalan swimmer is that she will not have her coach Fred Vergnoux by her side, who due to restrictions had to choose which ‘bubble’ to be in and has “decided to be in the open water one”. “I have already competed without him in some World Cups. In the preparation he has been and has already played his important role “, he pointed out.

The athlete knows that they will be “Beautiful and different” games, but that they should “value” them because a year ago it seemed “almost impossible” that they were held. “It is good that they are done to show that, with care and sanitary measures, we can continue to do everyday things. We have to adapt to everything that happens,” said the double Olympic champion of 200 butterfly, that when she has “a rest” after Tokyo will ponder “what may happen in the future” and if it continues to Paris.

Belmonte confirmed that will travel on Tuesday “by technical decision” and that the “key” for a good adaptation to the time change will be “not to sleep until it is night” on the day of arrival in the Japanese capital, an adaptation that will also have to be done for the “strange thing” of having to swim late in the morning, although you already have the experience of Beijing 2008.