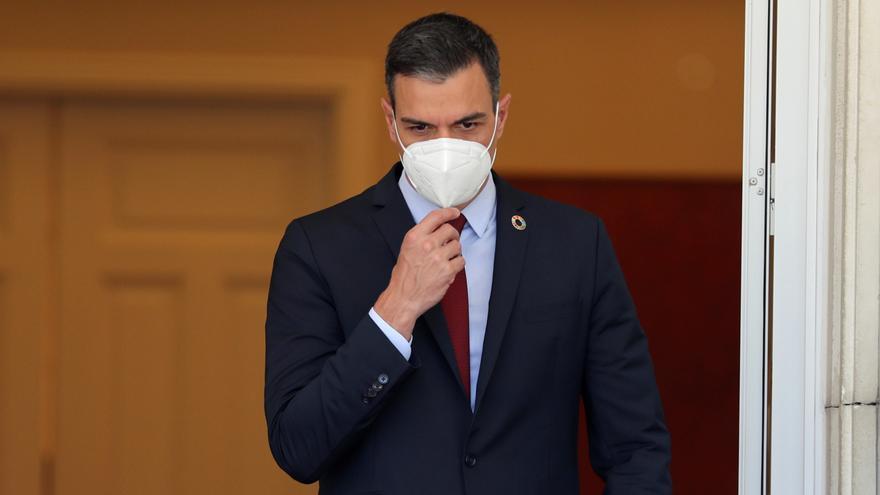 “There is no debate”, “we are not going to enter“,” I don’t know anything. “Such messages were reiterated by senior government and PSOE officials when asked this Friday about the future remodeling of the Executive. The alternative was, directly, the be quiet. All accepted the warning launched by Moncloa hours before: the coalition Cabinet is focused on the fight against the pandemic, which is already facing its final stage, and economic recovery. The rest are “comments or rumors.” For now no more detailsAlthough the president has not issued any signs that he intends to stop an operation that was still and is maturing.

Pedro Sánchez plans a restructuring of his Government, perhaps with less departments Ministerial, which in their environment they place before the summer holidays or for the return, at the beginning of the course, towards the 40th Federal Congress of the PSOE, which will be held from October 15 to 17 in Valencia. It would be a change that would materialize, in any case, after the Council of Ministers resolves the records of the pardons to the 12 pro-independence leaders condemned by the ‘procés’.

The socialist leader would seek cushion the impact of a measure of high political cost, divisive in the party and the electorate and much fought by the right-wing opposition in Parliament. It could, in short, counteract an unpopular and controversial initiative in a part of Spain with a change of faces in the Cabinet, a maneuver always very attractive in the media and an asset that all presidents save to go on the offensive and give a “new impulse“to the legislature.

Precisely that need to send the signal that the worst of the pandemic is over and that another stage is now beginning would also allow Sánchez to freeze the remodeling until September. After all, it has for move the pieces of two interconnected boards: that of its Executive and that of the PSOE.

The SEC message did not confirm or deny the remodeling, but stressed that the exclusive “prerogative” belongs to the president.

Beyond the times, government sources and the party leadership have agreed that Sánchez will probably create a larger Cabinet “political weight“, and in which he will visualize changes of depth. It will break the continuity line that links the first Government that he formed -on June 7 exactly three years ago- with the one he appointed after the incorporation of United We Can, and that has only undergone surgical retouching for the departure, for the Catalan and Madrid elections, of Salvador Illa and Pablo Iglesias

The news of an upcoming ministerial restructuring had been in the air for weeks, since the PSOE hit on 4-M. It was a movement “of manual“, as defined in Ferraz, to try to absorb the wear and tear of management and signal the opening of a new period coinciding with the advance of vaccination and the arrival of European funds. But this week the information about that possible redesign of the Executive They rushed in. First, on Tuesday in ‘La Razón’, and later, on Thursday night, EL PERIÓDICO and other media, cascading.

The Executive insists that it is focused on vaccination and economic recovery, and not on “rumors”

The news caught the fourth vice president, Teresa Ribera, in ‘The night in 24 hours’, on TVE. Implicitly, he came to admit that the president is preparing a government crisis: Sánchez “is working in how to face the new stage in which we are “.” It is up to him to evaluate how, when and with what equipment he wants to continue managing this new stage. “The succession of headlines caught the president on the return flight from Tripoli to Madrid, with a delegation of businessmen and journalists.

At 23.09 on Thursday, the Secretary of State for Communication (SEC) sent a statement to the media to highlight the obvious, that it is the chief executive who has the “prerogative“exclusively to” form or modify his Cabinet “. The president, the note said, is focused on” getting out of the pandemic and overcoming the economic crisis and the agenda of the reunion with Catalonia “. Vaccination is the” “high priority“At this time and it is the one that will allow” a rapid recovery of our country, “he continued. La Moncloa underlined the importance of two” milestones “: the figure of ten million people immunized with the full schedule, which was reached this Friday -the Government forecasts were fulfilled – and the next approval of the European Commission to the Recovery Plan. In both questions are “overturned” Sánchez and his ministers, “and not in rumors or comments “, which” only the president could confirm. ”

We have reached a new milestone: more than 10 million people already have a full list in Spain. We are approaching the target of 70% of the immunized population before the end of summer.

Thanks to those of you who make success in humanity’s greatest vaccination campaign possible every day. pic.twitter.com/i0q9d1tehs

This last tagline of a statement that did not confirm the reorganization of the Government, but that did not deny it either, was clear enough: the only one who can speak of relief in the Executive is Sánchez, period. “The slogan was clear. Everyone to be quiet“, summed up a member of his leadership this Friday. The announcement made a deep impression. Neither the Cabinet nor at the heights of the party wanted to add more. All were vague responses to messages or calls, or he was directly silent for an answer. The tap it was closed with the hope that the media pressure would decrease. The president has always prided himself on pampering the ‘surprise factor’ and his circle of collaborators, in whom he fully trusts, is very small. “Tranquility“, they prescribed in their circle.”Will not stop the government crisis, but he will do it when he wants, “said another source in the Executive.

“It depends on him”

However, in the Council of Ministers there are those who interpret that, once Sánchez’s plans to renew his team have transcended, so clearly, perhaps as never before, he already has only two paths: “Or confirm to your Executive or clear up doubts as soon as possible, because it has dancing speculations, people in the pillory, in the spotlight. It conveys an image of weakness, of provisionality. Every day that passes with doubt is bad. Not only for the ministers, who are the ones who have to promote the policies, but for their teams in each department. ”

Doors to the outside, the message conveyed by the ministers questioned was to pour water on the fire. Sánchez is focused on vaccination and on the way out of the economic crisis, said the head of Industry, Reyes Maroto, from Benidorm (Alicante). “The rest will be what the president decides, it depends on him“, he stressed. The Minister of Health, Carolina Darias, three-quarters of the same in the SER: in the recovery and in” cornering the virus “, that is what Sánchez is focused on.” I do not know anything, but not the opposite “, assured the person in charge of Universities, Manuel Castells (United We Can) from Cerdanyola del Vallès. Ribera herself, in the morning on Telecinco, backed off and asked the journalists “do not fuel rumors that they don’t make sense about a government crisis “because the competition belongs to the president.

Just as it seems quite clear that there will be remodeling –the question is when– Its scope and who it will affect is not so obvious. Like all the most personal and sensitive decisions, he will prepare it on the side of his team at Moncloa, led by his Cabinet director, Iván Redondo. There are pools for all tastes. Ministers appointed by the opposition, others scorched by their management, others well valued but with a discreet profile, others who could have a new destination … It is Sánchez, true, who has to compose the puzzle and project with him the message with which he wants to sign the second part of the legislature to regain momentum and turn around some polls that are beginning to be adverse.