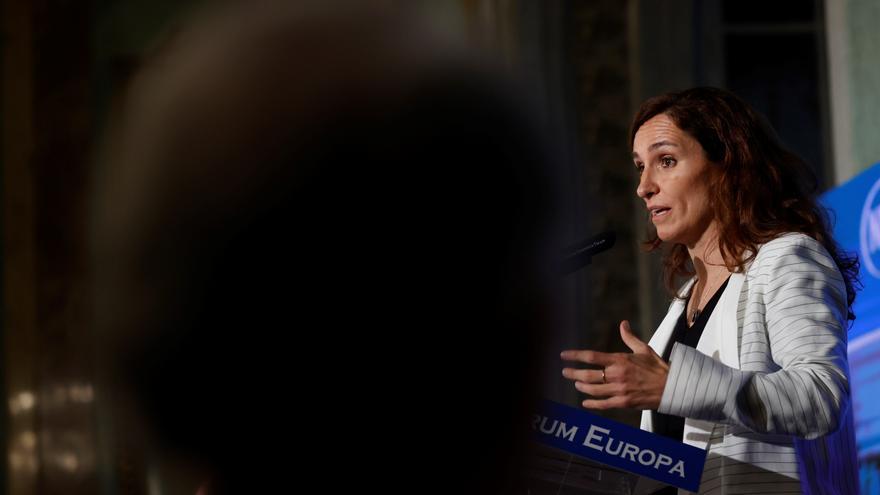 Monica Garcia has today marked on the calendar. The anesthesiologist, spokesperson for More Madrid and leader of the opposition to Isabel Díaz Ayuso faces this Thursday a fireproof for its political consolidation: the debate on the general budgets of the Community, the first that it will star since its arrival in the Madrid arena. This Thursday, the leader will measure her robustness beyond healthcare, for which he stood out in the beginning and that served as a springboard to make yourself known during the pandemic.

The leader has spent the last hours focused on preparing this economic debate, the first in which she will act as leader of the opposition. The last budgets that were approved in the Madrid Assembly were given even before the party existed, and date from 2019. The accounts were approved after the departure of Cristina Cifuentes and during the interim presidency of Ángel Garrido, then of the PP, which later passed to Ciudadanos.

In 2020, Ayuso agreed on his economic project with Ignacio Aguado but the opposition of Vox and the left led him to extend the accounts. And on March 10, the same day that a budget agreement with Cs and Vox was to be closed for this year, the president of the Community precipitated an electoral advance due to the threat of being deposed by means of a motion of censure after the attempt of a similar operation in Murcia.

It so happens that in the last three years there has not been a profound debate on this matter, and so far the leader of Más Madrid has only starred in a face-to-face with Ayuso of a similar magnitude, during the June investiture debate, shortly after the elections.

After this initial stage and a year and a half after the regional elections, García’s team is aware of the special relevance of the confrontation that he will maintain this Thursday in front of the Madrid president to consolidate as a candidate with a vocation for permanence beyond the health situation.

The importance that has been given to this appointment has led García to wear the last hours focused on preparing the details together with his closest team, made up of his usual speech advisors, Pablo padilla and Miguel Monar, with whom you have prepared your speeches.

The leader has been immersed in this matter since Tuesday, when the budget agreement between PP and Vox was announced, also drawing on the work of the two most specialized regional deputies in this matter: Eduardo Gutierrez, spokesperson for Más Madrid in the Budget Committee, and Rachel Huerta, deputy spokesperson in this same body.

The intensity of the preparation in recent days also responds to the availability of the leader, who after a few months of adaptation to her new political role, has returned to work part-time as an anesthetist at October 12 Hospital; a task to which he dedicates two mornings a week, or three those weeks in which there is no parliamentary activity called in the Assembly.

The challenge for Garcia is overcome the first stage as leader of the opposition, a position to which she arrived supported by the credibility that her profession in the health field gave her at that time, which earned her strong sympathy during the May electoral campaign, marked by extreme concern about the pandemic. Once social concern about the covid seems to have eased, knowledgeable sources acknowledge, the challenge is to turn García into a ‘comprehensive’ candidate, capable of handling all subjects beyond the areas in which she was specialized. And this Thursday an important examination takes place.

Although in their environment they point out that “it is struggled in parliamentary sessions and face to face”, many of the issues discussed so far they were more political. In this specific case, however, the leader of Más Madrid will be seen forced to enter into the detail of the figures, who will have to master fluently to consolidate himself as a political figure, beyond the situation of the last year and a half.

They have been working on this mission since last May, when the More Madrid parliamentary group was formed. Deputy Javier Padilla, also a doctor by profession, went on to take charge of matters related to Health, with the aim that Mónica García was expanding its space of competencies and strengthening its profile in subjects such as economics or education. Added to this are the ‘confrontations’ with Ayuso during the control sessions to the Government on Thursdays.

Most of these dialectical confrontations tended to be of more ideological cut, a dynamic in which the president of the Community is especially comfortable. That is why Mónica García will try to land the debates and aim at specific public policies; a scenario in which Ayuso handles himself worse and that can highlight the gaps in his project. Given this circumstance, Garcia’s preparation takes on even greater importance.

PP and Vox agreed reject any amendments from the left to the bills submitted. This will lead to the debate being more decaffeinated than usual, although from Más Madrid they will insist on questioning this rejection. Some of the main modifications requested by the Madrid party have been proposals by social groups. And it is for this reason that, they advance, they will not give up taking them to the debate.