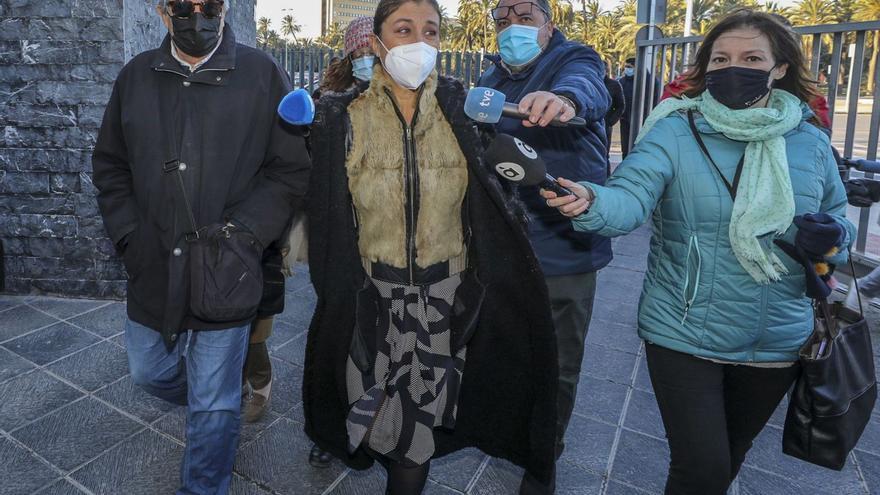 The former mayor of Orihuela, Mónica Lorente, blames the journalists, “who did not get the good news”, for her accusation of the alleged illegalities in the processing of the Vega Baja waste plan. This has been declared by the former PP politician in this Wednesday’s session before the court of the Alicante Court in Elche, which is judging a case in which he shares a bench with his former party partner and former president of the Diputación José Joaquín Ripoll and the businessmen Enrique Ortiz and Ángel Fenoll, among others. Lorente faces a request for 4 years and nine months in prison and 24 and a half years of disqualification for influence peddling, disclosure of privileged information, prevarication and fraud.

To questions only from her defense, the lawyer María Sansano, the former mayor, lamented her involvement in the process “because ofSome statements I made on January 4, 2008 during the inauguration of the Plaza de Carmen where the journalists published the answers, but not the questions, and they did not get the good” (sic), he affirmed.

The demonstrations took place the day after the Zonal plan was awarded to the Joint Venture that Ortiz had formed with Cespa for this contract. On the occasion of the inauguration of the Plaza del Carmen in Orihuela, and before nearly a dozen media outlets, the former popular politician took the opportunity to ensure that the macro dump would be installed on land that, although without giving the name, corresponded to the La Pistola farm owned by Fenoll, instead of doing it in Lo Cartagena, which was the proposal presented by the successful bidder.

Also Read  activists want a day to honor the victims

Lorente denied this Wednesday before the court that he had made these statements, despite the fact that there is documentary evidence in the newspaper archives that this was the case (this newspaper echoed them in its edition of January 5 of that year), and added that he did not He was surprised by the change in location of the Lo Cartagena plant “due to the social rejection” that it caused as that land was closer to the urban center of the district than that of Fenoll.

The Anti-Corruption Prosecutor maintains that Ripoll, with the collaboration of Lorente, maneuvered for Ortiz to buy the La Peseta farm from Fenoll to build the landfill that they had just been awarded and thus compensate the businessman from Orihuela, very close to the PP, for having been left out of the waste management business. He had also submitted to the contest but his proposal was rejected. Lorente, who refused to respond to other parties, insisted that there is no record that shows that he offered that farm.

A land that was the focus of the two long hours of testimony by José Candel, a public works engineer employed by Ortiz for more than three decades, who recalled the refusal of the owner of Lo Cartagena to sell them the farm, despite the fact that it had been incorporated into the proposal with which they entered the contest. And he admitted that, faced with the unwanted scenario of resorting to expropriation, they looked for other land options, including that of Fenol, despite the fact that he was asking for ten times more than what he had paid for it months before.

Candel, who along with Ortiz has been the only defendant who has responded to all parties, denied that the change of location was due to a delay and a price increase of around 6%, as prosecutor Pablo Romero maintains. As his boss, he denied that they were pressured to buy the farm from Fenoll and stated that they never did.

The silence of former socialist Antonio Amorós and others

The former socialist politician Antonio Amorós, who, on the advice of his lawyer, José Sánchez, accepted his right not to testify, did not want to respond to anyone in Wednesday’s session. Amorós is asked for the same sentence as Lorente (4 years and nine months in prison and 24 and a half years of disqualification) for identical crimes: disclosure of privileged information, influence peddling, prevarication and fraud. Subsidiary civilian officials also passed through the room, who also declined to testify.

What the former councilor says she didn’t say

Reproduction of the page published by the newspaper INFORMATION on January 5, 2008, two days after the award to Cespa-Ortiz of the Vega Baja Zonal waste plan was made public and one day after the then mayor of Orihuela, Mónica Lorente, publicly declared that the macro dump would go to the farm (La Pistola) with which Ángel Fenoll had unsuccessfully entered the tender instead of the one that appeared in the awardee’s proposal (Lo Cartagena), both located in the district of Orihuela of Torremendo. Although the former PP councilor attacked this Wednesday’s session against the allegedly biased information on this subject given by a television program, whose DVD works on the cause, at least a dozen media outlets covered that call. Among them, INFORMATION, whose headline leaves no room for doubt about what the former mayor declared.

What the former councilor says she didn’t say