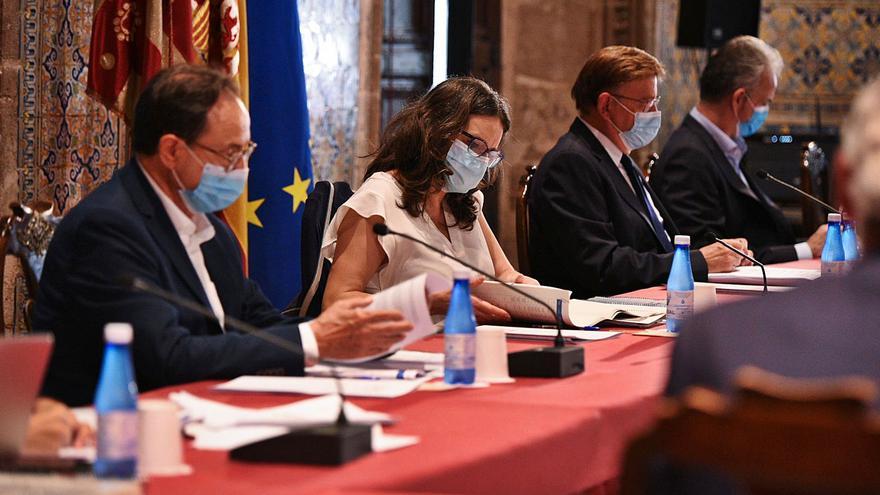 The list of events recorded this Wednesday shows the tensions that exist in the left-wing coalition that governs the Generalitat on account of the future distribution of money between ministries. Commitment and United We Can aim to strengthen a strategy that, de facto, would reduce the power of the third partner of the coalition, the PSPV, in the preparation of public accounts. His intention is to modify the formula used so far to prepare the Generalitat’s budget, with bilateral meetings between the department headed by Soler and each of the government areas. Now they intend to turn this mechanic around, gain prominence. His commitment is to draw up the most important law of the year, that of budgets, collectively and promoting “co-responsibility” between the different departments. That is something that translates into a clear claim to have access at all times to the negotiations that take place with each Ministry; although, according to the socialists, it is nothing new, since it already happens through the miscegenation established in the Administration’s organization chart.

The vice president of the Consell intended to address this issue at the meeting set for this Thursday with Soler. It was an encounter that, according to sources in his department, he had been trying to square off for a long time. It was last week when the head of the Treasury made a hole in his agenda and agreed to meet with Oltra this Thursday, with a subsequent appearance before the media. In the meantime, the conselleria closed another meeting with the second vice president, Héctor Illueca, de Podem, to also talk about the accounts, exactly the same day as Oltra, but two hours later and, in the same way, with a subsequent meeting with the Press. Everything indicates that this movement has annoyed the also Minister of Equality and Inclusive Policies, who has decided to suspend the dialogue with the socialists.

Also Read  Barcala reinforces its Praetorian guard: two more advisers and a salary increase for two of the team

Oltra’s challenge comes at a crucial moment, when the countdown has already begun to present the economic proposals of the ministries for the next financial year. The councilors must formalize your initial request for funds for 2022 through September 17. However, everything indicates that Oltra will not send the mandatory documentation. It will not do so until the parties that support the botanical Executive meet to agree on the framework in which the negotiation on the global distribution of money should be promoted, since it considers that this is where the master lines of the distribution of funds should be drawn, taking into account, in addition, the important injection of European funds that is yet to come. Unides Podem also advocates ending this “radial” preparation of the accounts between the Treasury and the regional ministries, and calls for cross-sectional negotiation.

From the socialist ranks, on the other hand, they show strongly disagree with the position defended by Oltra. They are not closed to dialogue, they affirm that quite the opposite, but they emphasize that the negotiation of the budgets must be developed within the regional Executive and not in the sphere of political parties. In the same line they are manifested from the Ministry of Finance. They point out that they debate yes, but in the Consell, and without forgetting that it is their department that directs the preparation of the budgets based on the expected income.

Ruth Merino does not see Mazón “very prepared” to govern

The trustee of Cs in the Cortes, Ruth Merino, this Wednesday marked a distance with the regional leader of the PPCV, Carlos Mazón, stating that “he does not seem to be very prepared” to govern, since he has proposed the approval of a trade bond Express similar to the one that his formation already proposed through an amendment that he managed to include in the Generalitat’s budgets for 2021 and that the PP deputies did not support. Merino has pointed out that the campaign to promote the image of Mazón in the Community makes sense because “it has to be made known”, although Cs is not in campaign mode. However, she has asserted that she would be delighted to be the candidate of Cs in the Community if she receives the support of her party.