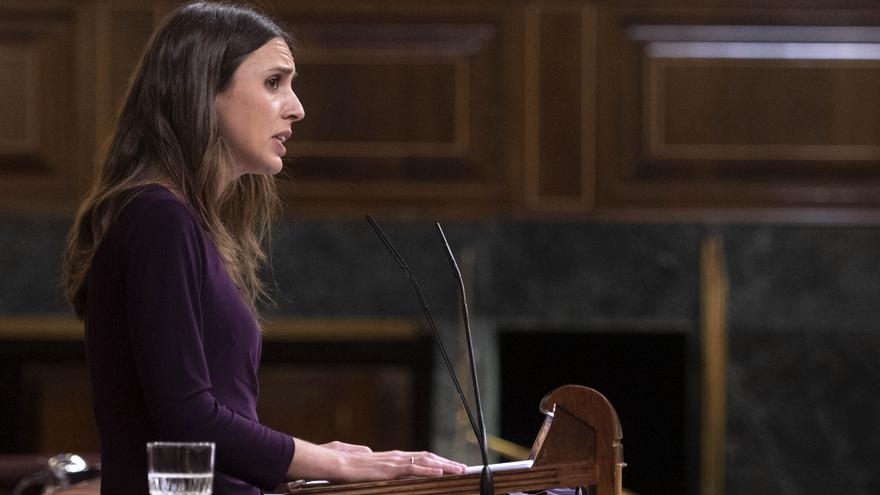 Gesture week and bridges laid between the Government and the PP. If this morning socialists and popular agreed to renew the constitutional bodies -except for the Judicial Power-, this afternoon the Minister of Equality, Irene Montero, has offered the PP to approach positions on the law of the only yes is yes, to reinforce the agreement reached in the State Pact against Gender Violence: “The women of this country, whoever they vote for, they deserve our agreement.”

The Minister of Equality has opted for a conciliatory tone with the popular, despite the fact that they have opposed his great legislative project (the organic law for the comprehensive guarantee of sexual freedom) with an amendment to the entire text, as well as Vox has done.

Unlike her message to the far-right party, which has denounced that its rejection of this law and its denial “now border on institutional violence,” the minister has called on the PP to return to the spirit of the agreement that made the Pact possible. of the State against Gender Violence and has promised that it will work as much as necessary to reach a consensus on the law against sexual violence.

The State Pact, approved in the Cortes with the agreement of all political forces and the abstention of United We Can during the last Government of Mariano Rajoy, establishes precisely that Spain must have a specific and comprehensive law against sexual violence.

However, the party led by Pablo Casado has presented a amendment to whole of the Government’s project because it opposes, as the CGPJ did in its report on the text, to the definition of express consent, which it considers to be detrimental to legal security and the principle of presumption of innocence, and to the suppression of the distinction between abuse and rape, because, they believe, it would mean eliminating the principle of proportionality from the Penal Code.

The PP promoted the reform

The bill for the comprehensive guarantee of sexual freedom reaches Congress 19 months after its first approval as a preliminary draft in the Council of Ministers in March 2020.

However, already in 2018, the PP promised to review sexual crimes in the Penal Code after the scandal generated after the sentence of the Provincial Court of Navarra that condemned those accused of the multiple rape of the herd for abuse and not for sexual assault, not appreciating violence or intimidation.

After the massive feminist demonstrations in which the slogan was coined “Sister, I do believe you”, Justice Minister Rafael Catalá promoted the revision of the Penal Code in relation to crimes against sexual indemnity and freedom, a regulation that the Supreme Court had already said was “cumbersome and complex.”

Catalá brought together the General Codification Commission for this task and the jurists who were members concluded, with Dolores Delgado as minister, that the crime of abuse would have to be ended.

But it was not until the formation of the coalition government that this proposal materialized in a draft law: in March 2020, Minister Montero presented a text that underwent various modifications until its approval as a bill in July of this year.

In his first steps, he was the subject of differences between Montero and his colleague from Justice Juan Carlos Campo after he received harsh criticism from the General Council of the Judiciary, which unanimously rejected the wording of express consent and also the suppression of the crime of sexual abuse , extremes that the PP has defended in its amendment to the whole.

The law of only yes is yes

As it has reached the Courts, the draft organic law for the comprehensive guarantee of sexual freedom regulates express consent in sexual relations (a mandate of the Istanbul Convention) and reforms the Penal Code to end the distinction between crimes of abuse and rape.

The text that came out of the Council of Ministers establishes the definition of consent: “It will only be understood that there is consent when it has been freely expressed, through acts that, in light of the circumstances of the case, clearly express the will of the person ”.

Thus, it is established that any sexual act without consent will be aggression and the new wording of crimes against sexual indemnity in the Penal Code aims to create a progressive system of penalties proportional to the seriousness of the criminal acts, with aggravating factors such as group aggressions. , serious violence, the special violation of the victim and the use of weapons or dangerous means.

Also Read  Santa Cartel: The Fall of Millionaire: The Death Behind the Songs

In the area of ​​victim care, it includes the promotion of “24-hour crisis centers” and the creation of “children’s homes” to provide specialized care for child victims in centers where all the procedures and procedures are carried out. necessary treatments.

The law, which pretends to be to sexual violence what 1/2004 was to gender violence, considers sexual violence as aggression, harassment, exhibitionism, stalking or street harassment, sexual provocation, prostitution of others, sexual exploitation, corruption of minors, female genital mutilation, forced marriage, sexual feminicide and , in the digital sphere, sexual violence transmitted by technological means, sexual extortion and non-consensual pornography.

It also dedicates a section to the fight against impunity of the pimp industry, through the hardening of the Penal Code to prosecute all types of pimping and locative third parties, that is, the profit from renting premises where women and girls are sexually exploited. .