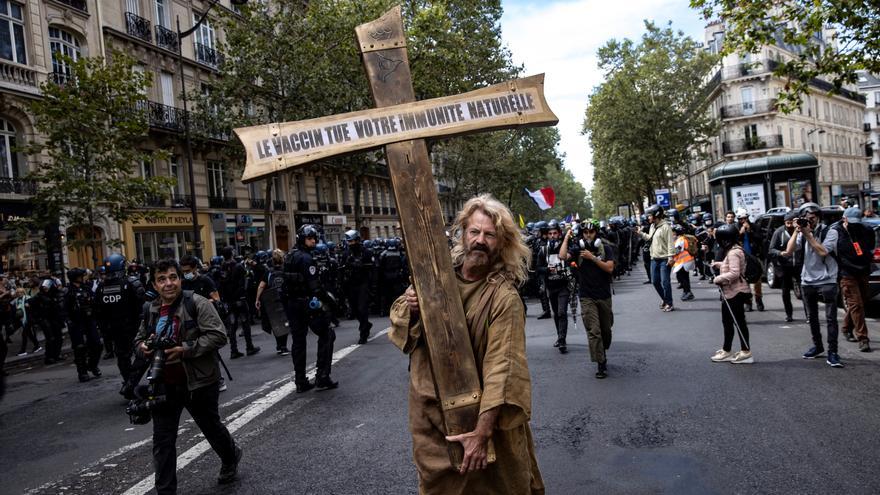 Opponents of the health certificate in France and the set of measures adopted by the French Executive to contain the new wave of the pandemic took to the streets of the country this Saturday for the fourth consecutive weekend with the most numerous demonstrations to date.

The forces of order carried out 35 arrests and seven officers were injured, although the day took place in general without notable incidents.

This last protest came preceded by the endorsement that the Constitutional Council, The body that ensures that the legislation is in accordance with the Magna Carta, gave on Thursday the extension of the health certificate to enter bars, restaurants or hospitals, or for long-distance internal trips.

Since July 21, that document that certifies having the complete vaccination schedule or not being infected was already mandatory to access cultural centers, But as of this Monday, August 9, his demand will mark the day-to-day life of the population in a much broader way.

“Although I will have no other choice, I’m going to boycott all businesses that ask for it. I am a creator, I go to fairs and markets and there will be certain activities that I will not be able to do. It’s going to be complicated on a financial level, but I agree to take that risk, “Marie, a participant in a Parisian protest, explains to EFE.

The validated bill also requires the health personnel be fully vaccinated by October 15 at the latest, a confluence of requirements that for a month has channeled his detractors into a wave of protests.

Across France, 150 cities hosted demonstrations. In Paris there were four, a reflection of the heterogeneity of a movement that brings together anti-vaccines, opponents of the requirement of the health pass or mandatory vaccination and opponents in general of the management of the health crisis.

“We are responsible citizens, absolutely committed to defending our fundamental rights and our freedoms. We are irreproachable, we are united and without political labels,” said the coordinator of one of the Parisian processions today. Sophie Tissier, del colectivo Paris for Freedom.

Another of the mobilizations in the capital was again led by the far-right Florian Philippot, former right-hand man of Marine Le Pen, excluded from his party, the National Group, and who criticized on Twitter that the president, Emmanuel Macron, exercises only “through fear and lies.”

“The government says from the beginning one thing and the opposite. There is no basis or logic “, also criticizes Marie, for whom the obligatory nature of the mask abroad was “the beginning of the end”.

Macron is on vacation at the official summer residence of Brégançon, in the south of the country, but this week he has been omnipresent on the networks and in the media with daily videos where he answered the doubts of the reticent or an interview in Paris Match where he made it clear that he will not back down.

“All restrictive measures have been voted by law. We are the only country that has had so many parliamentary controls during the crisis. And is there talk of dictatorship? Let’s be serious! “It said in that weekly.

The movement chains at the moment four consecutive Saturdays, but it has no expiration date.

“This fight is going to continue. I trust that in September, when everyone has returned from vacation, there will be more people, “Franck, a 51-year-old engineer who, like many participants, is not vaccinated, told EFE.

The health certificate, in his opinion, “is liberticidal and erodes the equality pact. They are measures totally disproportionate to the situation. The Government should promote vaccination, but not make it mandatory. “

The latest figures indicate that since the start of the vaccination campaign in December, 44.6 million citizens have received at least one dose, 66.2% of the total population, and 37.1 million have the full schedule, 55 ,1 %. On average, according to the Vaccin Tracker website, it is inoculated for the first time 323,416 people a day.