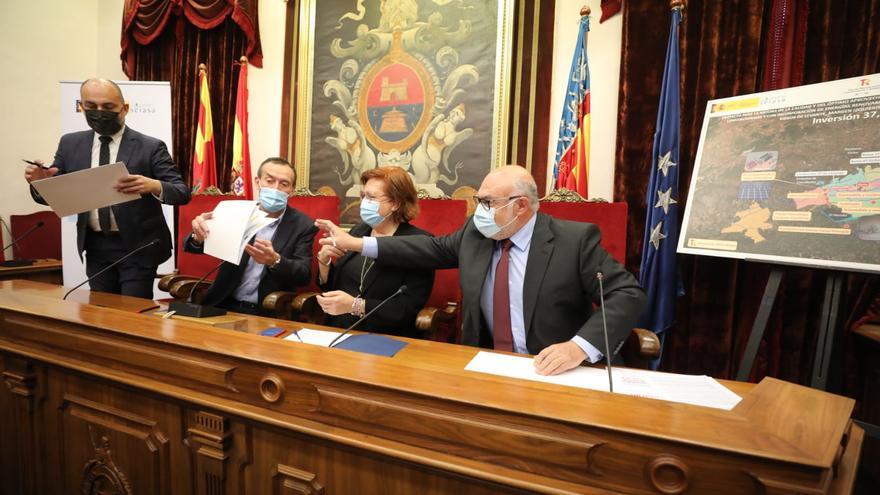 The Ministry of Agriculture, Fisheries and Food will allocate 37.6 million euros to modernize the irrigation systems in the south of the province so that they are sustainable in the irrigable area of ​​the Left Bank of the Segura, under the Recovery, Transformation and Resilience Plan ( PRTR). The construction of three photovoltaic plants and in charge of these grants the Riegos de Levante desalination project will be resumed.

This Thursday the agreement was signed in the Elche City Council to carry out these works and the president of Seiasa, Francisco Rodríguez Mulero, and the president of the General Irrigation Community of Levante Margen Izquierda del Segura, Javier Berenguer Coves, attended the signature. The event was also attended by the Government delegate in the Valencian Community, Gloria Isabel Calero Albal, and the mayor, Carlos González.

The objective is improve water efficiency, by allowing the use of reclaimed water for irrigation; and energy, by enabling solar photovoltaic installations for self-consumption that save costs for irrigators and reduce CO2 emissions into the atmosphere.

There will be four lines of action with the improvement of water quality, incorporation of renewable energies, reuse of treated water and implementation of remote control.

The project includes the start-up of the regenerative treatment plant for the water coming from the Segura river and from los azarbes, in order to improve the quality of the water used in irrigation. To reduce energy dependence, a self-consumption solar photovoltaic installation will be built to supply the water regeneration plant and the lifting stations of the general irrigation community.

On the other hand, the regulation and integration of the reclaimed water from the wastewater treatment plant (WWTP) into the hydraulic system of the general community has been planned, for which a system of pressure pipes will be installed. Similarly, irrigation management will be improved through remote control and remote control systems that will allow the digitalization and telematic management of irrigation.

The actions provided for in the agreements signed today will be carried out under the “Plan for the improvement of efficiency and sustainability in irrigation” included in the Recovery, Transformation and Resilience Plan (PRTR) of the Spanish Economy. Phase I, financed with Next Generation funds from the European Union. e80% of the cost of

The Government will assume up to 80% of the total works while the communities of irrigators and users that are the object of the action will contribute the rest.