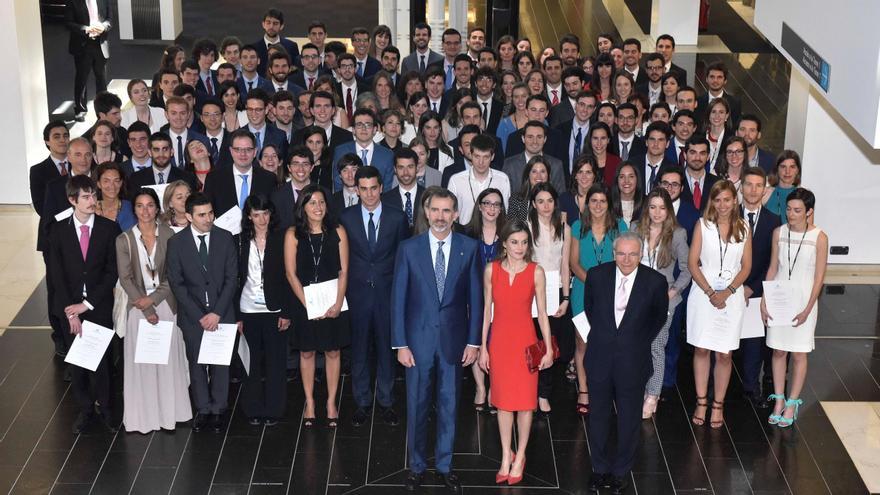 The ”la Caixa” Foundation has awarded more than 5,000 scholarships to expand the training of young talents and Spanish and foreign researchers since the launch of its Scholarship program in 1982. Specifically, 5,213 people have had the opportunity to study graduate, doctoral or postdoctoral research in the best universities and research centers in the world thanks to the impulse of these reputed aid.

Regarding the disciplines chosen by the scholarship recipients, the training in Life sciences (682 scholarship holders), Engineering and Technologies (647), Medicine and health (445), Company (340) and Philology and Linguistics (300).

«We are facing a truly transformative program, capable of completely change the lives of those who access the scholarship by being able to train in the best institutions. We are convinced that betting on these extraordinary talents is also promoting change and the improvement of society as a whole, since scientific progress, research and education are undoubtedly the engine of progress “, says Isidro Fainé, president of the ”La Caixa” Foundation.

The Scholarship program of the ”La Caixa” Foundation has a recognized trajectory and it is a Referrer between the university and scientific community. It is the most important of those promoted by private entities in Spain, both for the number of scholarships announced and for the rigor in the selection process, the variety of disciplines and the financial endowment of each scholarship. In addition, the program is distinguished by the special attention and personal monitoring offered to the fellow before, during and after the scholarship.

A moment from a scholarship ceremony.

Likewise, the recipients of the aid are part of the ”la Caixa” Scholars Association, a community that has become a cluster of excellence made up of professionals from all fields who are authentic references in their fields.

This is the case of the computer scientist, physicist and philosopher Sergio Boixo (University of New Mexico, 2003), who has led a historical milestone in technology at Google by designing and directing quantum computing capable of reducing calculations that would require centuries to minutes. Or that of the economist Mar Reguant (MIT, 2005), who has been chosen by the president of France, Emmanuel Macron, to advise his government on matters of climate change within the framework of a new committee of experts that will address what the world will be like after the coronavirus.

This program has also shown that promote mobility it does nothing more than establish bridges between Spain and other countries. Thus, for example, the chemical engineer Mercè Balcells (Rheinisch-Westfälische Technische Hochschule Aachen, 1996) has been working at MIT for a couple of decades. Balcells co-directs the MIT-Spain ”la Caixa” Foundation Seed Fund program, which encourages collaboration between scientists and students from MIT and Spanish research centers, hospitals and companies.

5,213 students and researchers have had the opportunity to train at the best universities and research centers in the world thanks to the emblematic grants awarded by the ”la Caixa” Foundation

And not only do they act as bridges with Spain, but there are also numerous synergies and collaborations among the group of scholarship recipients. This is the case, for example, of David Martín Porras (University of California-Los Angeles, 2005), Pablo Gómez-Castro (New York Film Academy, 2008), Elisa Lleras (Columbia University, 2007), Elia Urquiza (California Institute of the Arts, 2006) and Carlos Marqués Marcet (University of California-Los Angeles, 2007), co-founders of the production company of who, television Y advertising La Panda, promoted by Spanish filmmakers based in Los Angeles, whose objective is to join forces in this field and help others producers spanish to make his way in Hollywood.

But these are just a few examples of the 5,000+ lives that these scholarships have changed and that, year after year, have proven to be something. more than financial aid. The scholarship program of the entity maintains its original philosophy intact: to facilitate opportunities for young talents so that they can develop and give the best of themselves for the benefit of the whole of society.

Family photograph of the la Caixa Foundation scholarship recipients in the 2018 call together with the Kings of Spain and Isidro Fainé.

In 1982, the Graduate Scholarships abroad program was born with the aim of promoting mobility at a time when going to study in other countries was a privilege reserved only for a few. Today, these scholarships continue to drive the talent mobility and enabling bright young students to pursue a master’s or doctorate degree at universities in Europe, North America (the United States or Canada), and the Asia-Pacific region (Australia, South Korea, India, Japan, Singapore, and China).

In addition, the program has been able to adapt to new needs. In recent years the scholarship program has wanted promote cutting-edge research in Spain and Portugal. It is for this reason that the INPhINIT doctoral programs and, more recently, the Junior Leader postdoctoral program were created, with the aim of attract and retain the best talent Spanish and international researcher and promote innovative and high-quality research in the Iberian Peninsula. Through a complementary training program of excellence, these scholarships aim to consolidate research skills and promote an independent scientific career as a future professional option.

Since the beginning of the Scholarship program in 1982, the ”la Caixa” Foundation has allocated a accumulated investment of 304.8 million euros to the training of students and the promotion of researchers. In its first year, the program had an endowment of 368,000 euros. The investment by the ”la Caixa” Foundation in the 2020 call for applications was 29.7 million euros.