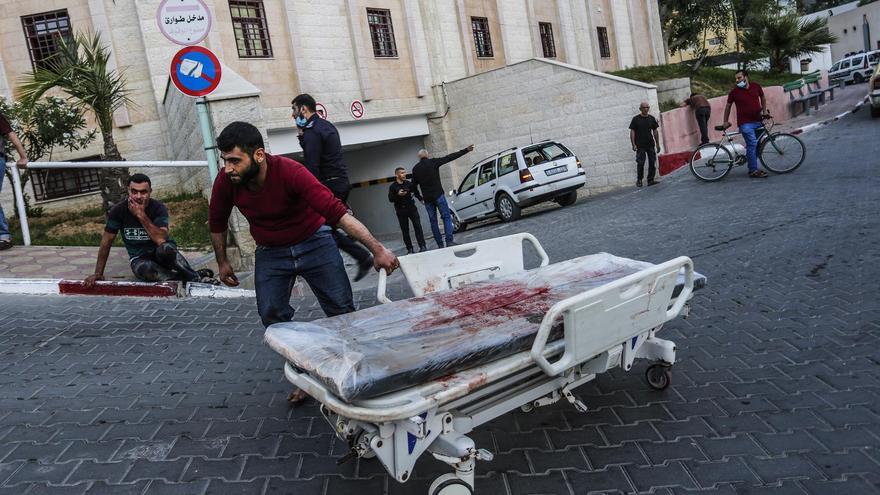 More than 700 Palestinians have been injured in the clashes this Monday with the Israeli Police in East Jerusalem and in the Israeli aviation bombings over the Gaza Strip in retaliation for the launch of rockets from the Palestinian enclave, from where more than 150 would have been fired since last afternoon alone.

The Palestinian Ministry of Health has reported in the early hours of this Tuesday that apart from the 21 killed, including nine minors, in Israeli bombings in Gaza, 788 people have been injured by “ongoing Israeli aggression” in the West Bank, including Jerusalem, and the Strip.

The riots in Jerusalem, developed mainly in the Esplanade of the Mosques – the third sacred place for Muslims – have resulted in 612 wounded this Monday, of which 411 have been transferred to hospitals, while in the bombings in the Strip 95 people from Gaza have been injured, reports the Palestinian agency WAFA. On the other hand, the Palestinian Health Ministry has reported another nine injured by rubber-coated metal bullets in the Palestinian Medical Complex in Ramallá, and another 37 in the same situation in the Qalandia field hospital. About 30 people have also been affected by live bullets, rubber bullets or inhalation of tear gas and are in the Hebron Hospital, while another seven have been injured for similar reasons and are distributed among the hospitals of Jenin, Tulkarm, Beit Jala and Rafidia.

For its part, the Palestinian Red Crescent has estimated more than 700 injured by the various incidents between Palestinians and Israeli forces, most of them, 600, in Jerusalem, where the Israeli Police has also reported 32 injured officers, collects’ The Times of Israel ‘.

The clashes began early in the morning. The Police have denounced the stone throwing from the Esplanade of the Mosques, while Palestinians have singled out officers for shooting stun grenades against protesters. The clashes have ended after the withdrawal of the Police from the Damascus Gate area.

After hours of relative calm, the riots continued on Monday afternoon due to the visit of the leader of the Religious Zionist Party, Bezalel Smotrich, to the Arab neighborhood of Sheikh Jarrá – whose inhabitants are threatened with expulsion by the Israeli courts – accompanied by other deputies of his training and hundreds of far-right sympathizers, although the Police have not allowed the Israeli presence in the place to avoid “provocations”.

Monday has closed with this balance, but the attacks and tension continue this Tuesday. The Israeli Army has reported the launch of more than 150 rockets from Gaza to Israel from 6:00 p.m. (local time) this Monday. “Since 6 pm, terrorist groups in Gaza have been firing rockets at Israeli civilians. Non-stop.” They have denounced through their Twitter profile in a publication at 4:00 am (local time) on Tuesday.

The international spokesman for the Army, Jonathan Conricus, has specified through a video on the same social network that the rockets have been launched by the Islamic Resistance Movement (Hamas) and other groups “towards civilians in Jerusalem and in communities south of Israel”. “We see this as a severe attack on Israel, an attack that will not go unanswered,” he asserted, stressing that they blame the attacks on Hamas and are prepared for “various scenarios.”

According to ‘The Times of Israel’, sirens have sounded throughout the night in different areas, including Tel Aviv. In addition, several rockets have been intercepted by the Israeli forces. Most of the projectiles have fallen in the open field, but the Red Star of David has reported “dozens” of affected in different impacts.

Precisely, in the Gaza Strip it has continued to denounce bombing from Israel at dawn this Tuesday. According to WAFA reports, eyewitnesses have detailed attacks with four missiles in the east of Jabalia, which has caused serious material damage and power cuts in the area. Three other missiles have struck west of Khan Younis in the southern Strip, and on agricultural land east of al Fojari, east of Khan Younis. In addition, Israeli planes have attacked land in the Al Zaytoun neighborhood in southern Gaza, and a raid has been carried out north of the same city, according to the Palestinian agency.

The Israeli retaliation would have been approved by the Security Cabinet, the hard core of the Council of Ministers of the Israeli Government, which would have ordered a “massive aerial bombardment” over Gaza, reports the Israeli daily ‘Yedioth Aharonoth’ in its digital edition. In this regard, the Israeli Prime Minister, Benjamin Netanyahu, has warned that Israel will respond “with great force” to the rocket attacks from Gaza. “We will not tolerate attacks against our territory, our capital, our citizens or our soldiers,” he said. On the other hand, a protest in solidarity with the Palestinians in the Israeli city of Lod has ended at the end of Monday night with a 25-year-old man shot dead and two other young men woundedThe circumstances of the shooting have not yet been determined, according to the Police, and collects ‘The Jerusalem Post’.