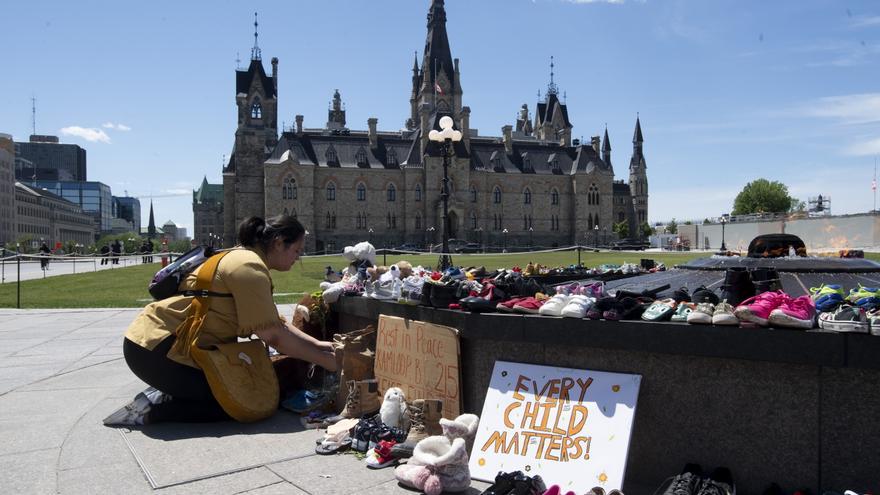 An investigation has found more than 750 unnamed graves near a boarding school for indigenous minors in Canada, amid the controversy in the country over the discovery of more graves in schools raised for forced assimilation of Indian population.

The head of the Cowessess tribe, Cadmus Delorme, has reported this discovery, which, he said, is unknown at the moment if they are tombs of minors – the oral tradition of the tribe points to the presence of indigenous children in the place- or if all would be related to the boarding school for indigenous children.

What it has confirmed is that “It is not a common grave”, but “nameless graves” in the cemetery that supervised the Catholic Church until 1960, which according to the Indian leader would have removed the graves, collects the public chain CBC. The tribe is approaching the site as “a crime scene“.

The Marieval Indian Residential School, where the graves have been found, operated from 1899 to 1996 in the area where the Cowessess tribe now resides, about 140 kilometers east of the city of Regina, capital of the province of Saskatchewan. Although the school was demolished, the church and cemetery remained.

It would be the largest announcement about the discovery of graves in boarding schools for indigenous minors so far, after at the end of May the discovery of more than 210 corpses of children buried more than 40 years ago will be announced at the former Kamloops Indian Residential School.

Following the discovery, the Canadian Prime Minister, Justin trudeau, has been “very saddened” and has promised that they will “honor his memory” and they will tell “the truth about these injustices”, since “no child should have been separated from their families and communities and stripped of their language, culture and identity.”

These findings, he lamented in a statement, “reaffirm a truth they have known for a long time” and “deepen the pain that families and indigenous peoples are feeling”, a “trauma” that is “the responsibility of Canada”, therefore that the Government will continue to provide the necessary resources to “expose these terrible evils.”

“The finds at Marieval and Kamloops are part of a larger tragedy,” Trudeau has asserted, they are “an embarrassing reminder of the systemic racism, discrimination and injustice that indigenous peoples have faced, and continue to face“In Canada, a truth that they must” recognize together “to” learn from the past and walk the shared path of reconciliation, so that we can build a better future. ”

The Canadian Prime Minister has lamented that “no child should have spent their last moments in a place where they lived in fear, never to see their loved ones again, and” no family should have been robbed of the laughter and joy of their children playing, and the pride of seeing them grow up in their community. ”

These types of schools were created in the 19th and 20th centuries to forcibly assimilate young Indians and they were funded by the state and run by religious organizations, and recent investigations and findings of bodies have caused a stir in the nation that has prompted Prime Minister of Canada, Justin Trudeau, to demand that the Catholic Church “take responsibility.” .

After this information, in addition, some of the Canadian indigenous tribes began to investigate the surroundings of the vicinity of these schools with ground penetrating radars to locate graves, as is the case of Cowessess, something that experts have already anticipated will lead to more discoveries of this caliber.

Canadian indigenous groups have called for all former residential schools in the country to be investigated. For decades, thousands of children were separated from their families and placed in residential schools, where they had to learn the traditions of the European colonialists in order to forget their own culture, also facing violence and sexual abuse.

A commission of inquiry concluded in 2015 that many of the minors never returned to their communities and thus recognized a “cultural genocide“while the Lost Children Project has so far identified more than 4,100 minors who died during their stay in boarding schools, many of whom were buried in the school grounds themselves.