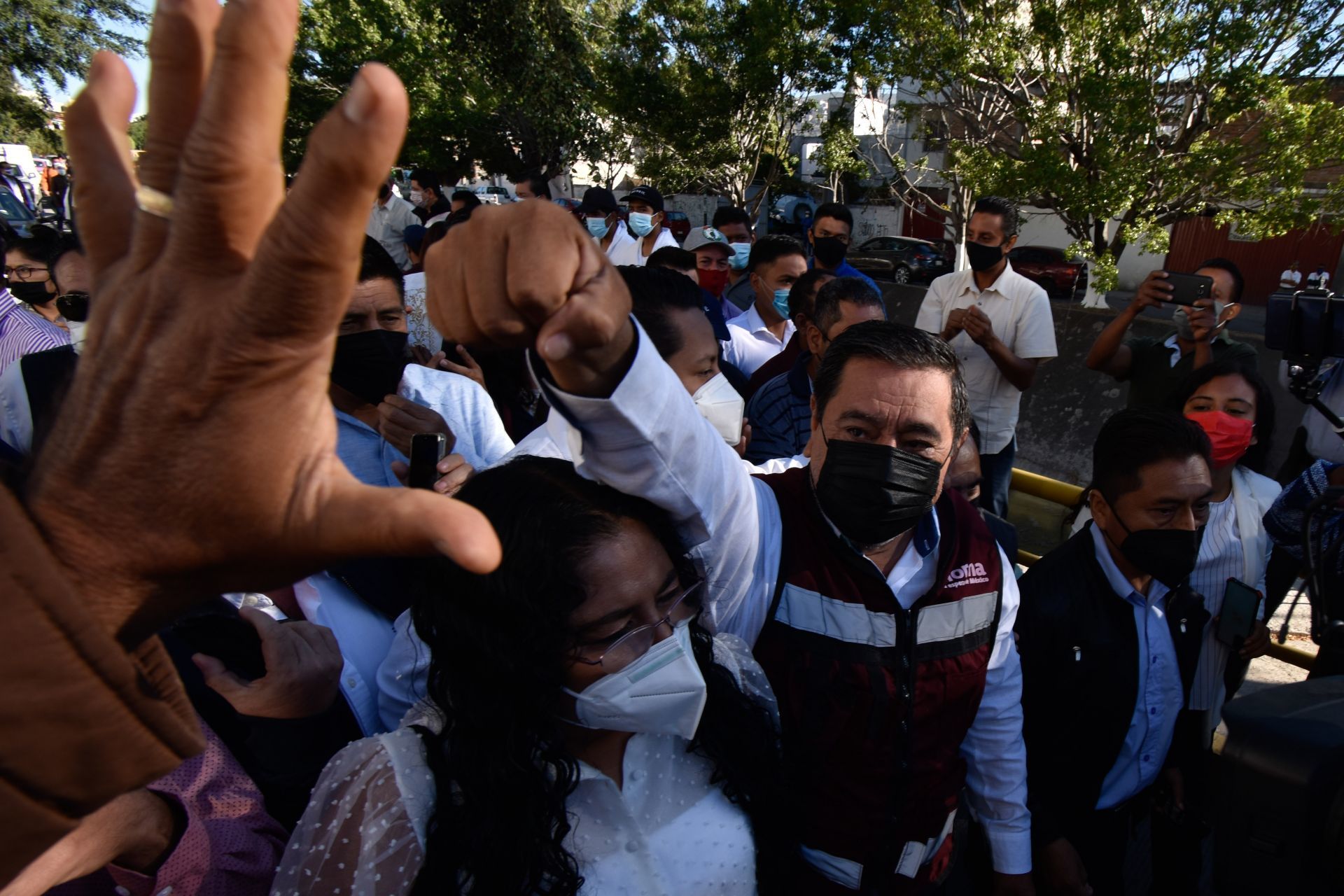 Morena, the party of President Andrés Manuel López Obrador, has confirmed Félix Salgado Macedonio as its candidate for governor of Guerrero. The controversial case of the politician, on whom two complaints of rape and at least three other accusations of abuse and sexual harassment weigh, culminates in his ratification as a standard bearer in the electoral campaign. “The people of Guerrero evaluated and made a decision. We are obliged to respect it, ”the party said in a statement this Friday. Despite the political storm raised within his own party, the protests of the militants, the demands of the legislators and the feminist demonstrations, the electoral aspirations of Félix Salgado have not moved an inch. On the contrary, they have been backed by the leaders of Morena and by López Obrador himself.

“Thank you very much to the people of Guerrero for confirming their confidence in me in another new democratic exercise that my Morena party carried out. Long live Warrior! ¡Hay Toro! ”, Wrote Salgado Macedonio on his social networks after the formation issued the statement. The candidate was the winner of the internal consultation carried out by the group to find out who of its militants was most popular among the people of Guerrero. A poll leaked to the media anticipated Macedonio’s victory, but the party had not confirmed the information. In the demoscopic exercise endorsed by Morena, Salgado continued to take advantage of the other applicants, but with a smaller difference.

“In the new poll, Félix Salgado Macedonio was the best positioned, so the National Elections Commission ratifies him in the candidacy,” the party reported this Friday night. “However, the lessons we draw from the debate are clear “Warns the training in the text, where it states that” feminism and the Fourth Transformation are the two main movements of Mexico in the XXI century. “We may have painful disagreements on current issues, but we are historical allies. We both fight against oppression, violence, inequality and injustice ”, he adds. Morena recognizes in the writing that “the macho culture of Mexico is a deep cultural problem” that “for centuries has hurt” the country: “We have to eradicate this culture.”

In the statement, the formation adds that “it is urgent to create an efficient and expeditious judicial system in favor of women that guarantees justice and truth.” And he concludes: “To end the corruption regime is to end the system of inequalities and oppression against women. Only a democratic and humanistic government that fights corruption, like the one headed by our president, is capable of that ”.

At the end of 2020 the road to the candidacy seemed paved until the complaints of rape appeared. One was filed in 2017 by a newspaper worker The Warrior Day, when the politician was director of the medium. The other was put by a woman who claims to have been raped by Salgado in 1998, when she was a minor and the candidate also aspired to the governorship of the State. The scandal was huge and Morena’s Honesty and Justice Commission tried to clear up the situation with an internal investigation to determine the probity of the candidate. The committee made an ambiguous decision: it put Salgado’s candidacy on hold, but unanimously determined that the accusations were “inappropriate” and “unfounded” and that it would repeat the polls to determine which candidate was the best for the next June elections, the largest in the history of Mexico.

Despite this exercise in political transparency, it was questioned whether there was a real intention in Morena to change its standard-bearer. According to electoral law, the party only had until March 1 to replace its candidate. After that, he could only change Salgado’s name due to death, if he was disqualified, or if the candidate decided to resign. After that day, the Guerrero Electoral Institute ratified Macedonio’s candidacy as there was no final judgment against him.

Born in the Tierra Caliente region, Salgado has a long history as the founder of the PRD in Guerrero. He has been a deputy, mayor of Acapulco, a senator of the Republic and twice a candidate for governor for said party; in 1992 and another in 1999. The last 32 years have served him as training to forge an unshakable political character and to occupy practically all the positions of power in his land. From the beginning, he has had the support of the Morena leaders who have closed ranks around him. From the president of the party, Mario Delgado; the Senate Majority Leader, Ricardo Monreal; even the president himself, Andrés Manuel López Obrador. The president downplayed the questions and accusations made against his candidate and came to describe them as a “media lynching.” A campaign orchestrated by the opposition and the media. For López Obrador, Salgado’s candidacy has been unshakable. In Morena, he is considered the candidate with the most possibilities of wresting the State of Guerrero from the PRI and the leader in all the polls.

The decision represents a blow to the feminist movement, against a candidate with accusations of sexual violence aspiring to be governor in one of the states with the highest rates of femicidal violence. Nor has the decision gone down well among the feminist bases of the party and in more than a hundred legislators of the group who have demanded their leaders withdraw the candidacy since the first complaints were known. “To register Félix Salgado is to erase with a stroke of the pen the legislative effort that the women of Morena are making, the struggle of women in the streets and the feminist movement in Mexico,” said deputy Lorena Villavicencio, in a forum organized by THE COUNTRY.

“After the time that was allowed to elapse in the case, we expected something different,” says Wendy Briceño, also a Moreno deputy, another of the signatories of the document against the candidate. The legislator believes that her party’s decision has to do with the fact that the Mexican political system is sexist. “That is what we have to tear down,” says Briceño. “This person should not have been in the Morena survey because he has an open process in the Guerrero Prosecutor’s Office and he was not the most suitable candidate to contest,” adds the legislator. Briceño believes that the decision will have consequences at the federal level for the party and will splash other candidates. “Morena complicates herself and Guerrero complicates. It is a decision that we have to reflect internally, ”he says.

The result of the poll for many and many was sung: Macedonio will be on the ballot. Despite the controversy, there has never been any legal impediment for Félix Salgado Macedonio to stand in an election and be the next governor of Guerrero, even when he continues to have an open case against him in the State Prosecutor’s Office for the crime of rape. If before the scandal someone did not know who the politician was, now his name is on the lips of all voters. For better and for worse. “There is a bull,” he wrote on social networks during the controversy. His future will be decided at the polls.