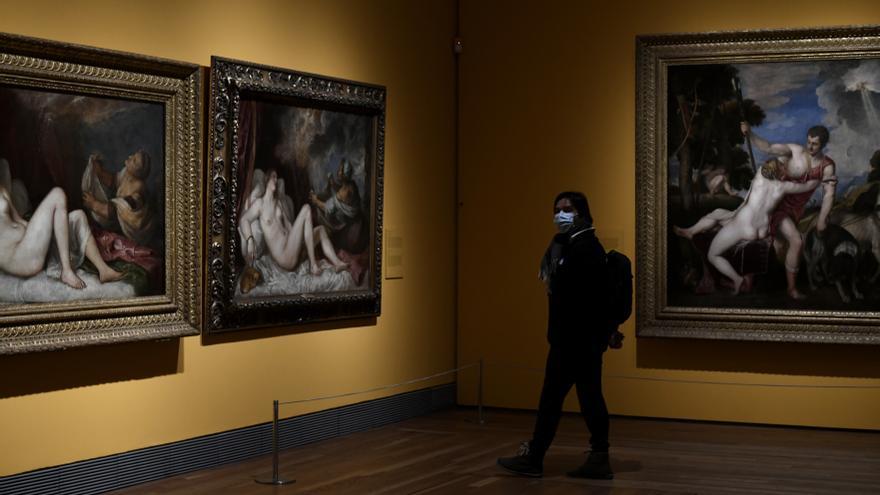 The great museums of Madrid have recovered visits in the year 2021, although still far from the figures reached in 2019 prior to the health pandemic. Capacity restrictions for much of the year and the drop in foreign tourists have conditioned the recovery of visits.

Thus, the Prado Museum closed last year with 1,175,078 visitors, 32 percent more than in 2020, but a number lower than the 3.2 million reached in 2019, the year in which a record number was reached in the history of the Madrid art gallery.

The same has happened in the case of the Reina Sofía and the Museo Nacional Thyssen-Bornemisza. During 2021 the Reina Sofía Museum received a total of 1,643,108 visitors: 619,331 correspond to the main headquarters, 746,406 to the Crystal Palace, and 277,371 to the Velázquez, both located in the Retiro Park. This figure represents a 30% increase compared to 2020, but it is still far from the 4,425,699 people who visited some of the center’s exhibitions the year before the pandemic.

For its part, the National Museum Thyssen-Bornemisza received 671,078 visitors, a figure that represents an increase of 97% compared to 2020, when only 341,008 visitors were counted, and which remains at 65% of those received in 2019, the year prior to the pandemic in which it exceeded one million visitors (1,034,873).

Of the total number of visitors who came to El Prado, 1,126,641 people did so at its headquarters and 48,655 in the different Spanish towns where the art gallery has been present through temporary exhibitions.

The audience profile remains mostly young (48% between 18 and 34 years old) and female (58.6%), and although since the COVID-19 pandemic began more than half of the influx continue to be inhabitants of the Community of Madrid, in 2021 there is a progressive increase in visitors from the rest of Spain (20.2%) and from foreign public (26.1%).

Likewise, since the COVID-19 pandemic began, the origin by nationality of visitors to the Prado Museum continues to be mostly Spanish (average of 73.9%). However, although more than half of the entire influx are still residents of the Community of Madrid (53.7%), this year there has been a progressive increase in visitors from the rest of Spain (20.2%), especially from the provinces of Barcelona (29.4%), Valencia (5.5%), Alicante (4.2%), Malaga (3.8%) and Zaragoza (2.8%).

Of the total number of foreign visitors and foreign public (26.1%), United States (15.68%), France (20.1%), Italy (9%), and United Kingdom (6%) they are still among the main sources, although well below their pre-pandemic presence percentages. Similarly, the presence of Asian visitors is practically non-existent.

In the case of the Reina Sofía Museum, the management has highlighted the fact that the flow of the public has been progressively ascending since May until the end of the last four months with figures similar to those of the years prior to the pandemic. The most outstanding event this year has been the presentation of the new Collection of the Reina Sofía Museum As for the temporary exhibitions, those that have had the greatest reception from the public have been ‘Marginalias’, the largest retrospective dedicated to the American artist Ida Applebroog and ‘Máquinas de trovar’, by the Spanish Pedro G. Romero.

For its part, the Thyssen Museum has recalled the existing capacity restrictions in the art gallery during most of the year and despite which 368,284 people have visited the permanent collection and exhibitions such as Georgia O’Keeffe or The Magritte Machine have been “a great public success “, with 110,050 and 170,182 visitors respectively.

Upward trend in Bilbao and Valencia

The same upward trend has been registered in museums in other autonomous communities such as the Guggenheim in Bilbao that received 530,967 visitors in 2021 and contributed 172.2 million to the Basque GDP, generating additional income for Basque public finances of 26.6 million euros. The number of visitors has been 6 percent higher than expected for this year.

And also in the Basque Country, The Gernika Peace Museum has closed the financial year 2021 with an increase in visitors 81% compared to the previous year, although they were still less than half of the visits registered in 2019.

In the Valencian Community, a total of 99,071 people visited the permanent collection and temporary exhibitions of the Fine Arts Museum of Valencia, which represents an increase of 51% compared to the previous year (65,691). The months with the highest influx were August (12,009), October (13,830) and November (11,677). By origin, 65% of the visiting public was from Spain, compared to 35% of foreign tourists from countries such as France, Italy, Germany, Great Britain and the Netherlands.

For its part, the Andalusian Center for Contemporary Art (CAAC), based in Seville, received a total of 138,060 visitors in 2021, which has meant an increase of 61 percent compared to 2020.