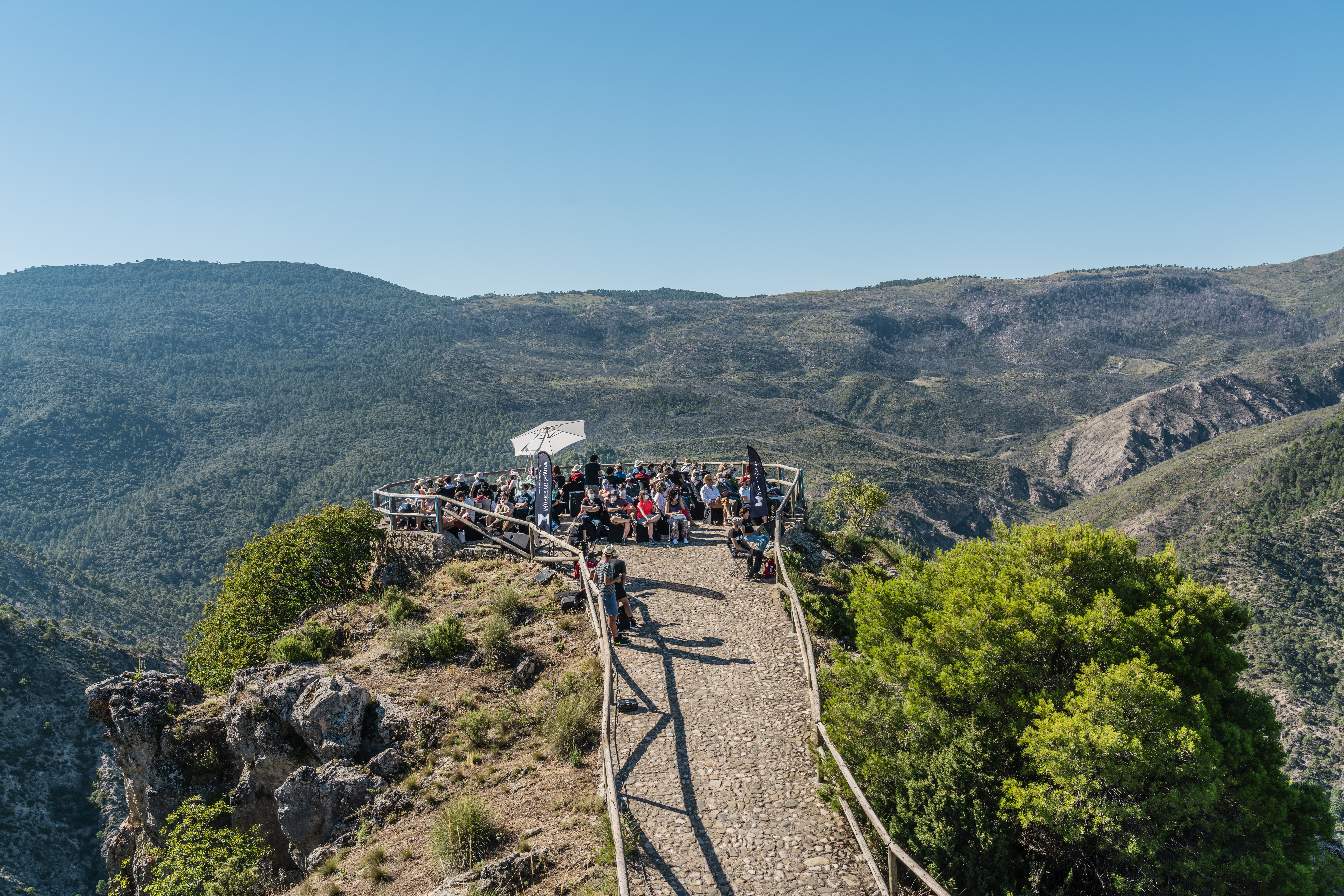 In a border corner of my home province, I have lived for a few days with a powerful sense of return and recognition. When I was very young and travel was much more difficult, the Sierra de Segura was at the far end of the province of Jaén, at the end of the bus lines that would take us to Granada in the opposite direction. The roads were narrow, bad, full of dangerous curves. The buses lurched and snored on the uphill slopes. Since you could smoke in them, and smoke thoroughly, the mixture of movement, the smell of tobacco and overheated plastic from the seats caused nausea and made trips longer and more exhausting. The young teachers who had just passed the oppositions feared being sent to mountain villages so small that they did not appear on some maps, and which were said to be isolated by snow in the winters. The towns had peculiar names: Cortijos Nuevos, Santiago de la Espada, Hornos de Segura, Segura de la Sierra.

One afternoon I see from the car that brings me from Madrid a steep mountain in which the pines and olive trees are mixed, and when I raise my eyes a white farmhouse and, higher still, the massive silhouette of a castle, its golden stones at the bottom. sunset sun. And then I remember with perfect clarity a time when I was in Segura de la Sierra, forty-odd years ago, and when we got to the town we asked how we could enter the castle, and someone pointed out to us the house of the neighbor who was guarding the key. In the warehouses of memory there are closed rooms in which everything has been preserved with the greatest accuracy, meticulous museums of minor moments of the past. The lady opened the door of her house and from a pocket of her apron took out a huge iron key, and handed it over to us without much formality. The castle stood on a rock above the town. The key had to be turned with both hands and caused a cavernous resonance. The memory of the key is accurate, but the one inside the castle has almost been erased. Climbing the last chilling curves towards Segura de la Sierra I try to remember what it was like on the inside, but I realize that the imagination usurps the memory: ruined patios strewn with weeds, rooms with concave roofs half knocked down. It is the tricky habit of restoring with inventions what has been forgotten.

The anecdotal has been erased, but something deeper remains, that recognition that has been awakening in waves since we left the horizontal moors of La Mancha behind and reached the first mountain foothills, the reddish lands of the Guadalimar river, those places between cultivated and wild, with meadows of holm oaks, with undulations of hills of olive groves, which stubbornly climb slopes where cultivation will be as difficult as harvesting. A part of that recognition, which shakes the depths of the soul, the secret nucleus of what is more oneself, has to do without a doubt with the sobriety of these landscapes, which, however, does not reach the harsh or the sullen. There is a sober beauty in the ranges of colors, the reddish and ocher of the earth, the dark greens of the holm oaks and the pines, the gray greens of the olive trees, as always touched by the dust of the roads. There is a peculiar cleanliness in the sky, crossed by solitary birds of prey, a gradation of blues and purples in that horizon of mountains to which we are approaching. They are the places that I saw when I was young when I returned to my homeland after the first trips, the first exits between hopeful and fearful to the outside world. Those colors of the earth and vegetation, those skies, those horizons, were conjugated to let me know that I was back, and that, no matter how far I had gone or many other places where I was tempted to go live. , this particular and perhaps not exceptional or particularly memorable territory was mine, or I was his. That’s why something vibrated inside me just when I saw him again, even when I would have preferred not to return, even when all the interests and concerns of my life were elsewhere.

I return to Segura de la Sierra after about half a century to attend an unusual festival called Music in Segura, and that the clarinetist Daniel Broncano has founded and directed for a few years. One of the places in my past turns out to have been turned into a celebration of the best of the present with great success. In this “periphery of the periphery”, as he says, Broncano has managed to attract young and extraordinary musicians, who move with maximum ease, with an almost reckless happiness, between the classical repertoire and the avant-garde, between solvency demanding of traditions and jubilation and experimentation game. A string quartet plays Schubert in a forest clearing. A percussionist gives a concert hitting rocks and tree trunks. Violist Isabel Villanueva plays Schumann accompanied on piano by Antonio Galera and then participates at midnight in a show of lights and electronic music. Elvira Lindo and Antonio Galera mix literature and music, and travel from the popular lullabies that Falla and Lorca loved to a vindication of the value of the arts in public education and in democratic culture.

I have gone to Segura de la Sierra to listen to music and I have been able to listen to some masterpieces of silence. From a viewpoint, at a still cool hour in the morning, I see the church tower, which is made of that sandstone frequent in the architecture of the Renaissance in these lands, and around it the revolving dance of the swallows, and more there a panorama of valleys and wooded mountains that unfolds like the successive panels of a Chinese painting. I don’t know how long it had been since I had a soothing silence like this. In that silence the steps are then outlined on the cobblestones of the slopes, the chimes of the clock in the tower of a church, the jet of very cold water in a fountain. Having returned is like never having left.