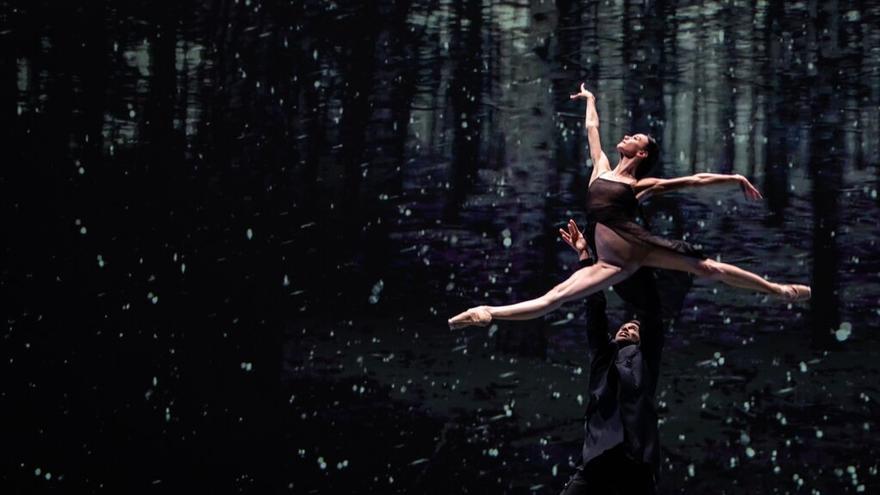 How did this new show come about?

“Fordlandia” is a show we created during confinement. We were working in Germany and they closed everything overnight. I went back to Spain and he went to Holland. We thought it was a few days and in the end it was much longer. The situation awakened something in us. We had never done anything together because we didn’t have time to get together. We decided that this was the perfect time because confinement gave us the luxury of time. We had to create the idea and concept over the phone. We wanted it to be real, so we captured what we were experiencing. Those feelings of uncertainty and separation. We have used audiovisual resources to recreate the exterior, something that we did not have during those days. The idea that everything was going to end and we would meet soon.

First time working with Golding on such a project.

We had been dancing together for two years after knowing each other for a long time. From the beginning we wanted to build something of our own, and until now we had not been given the opportunity. It has been a wonderful experience because we connect extremely well despite being so different. He has an amazing creative side, ideas are constantly coming to him. I, on the other hand, am the one who puts those ideas into motion. I have a very organized mind and I love logistics, production, organization, and so on. We make a good team because we understand each other well, and that is why we have enjoyed every moment of the process. We are already thinking and preparing the next show.

He has received many accolades during his career. What remains to be achieved?

When I was 11 I gave my first classical dance show and told my mother that I wanted to be the last of the swans on stage. Because my goal has always been to spend my life on stage. It was clear to me that I wanted to be a dancer and dedicate myself to dancing. For me it is a gift to get up in the morning and go to a theater to dance. I have been in this profession for 31 years and I never imagined that I would get here. I think I have fulfilled many more dreams than I had. I feel lucky for everything I have achieved, the places I have performed, the people I have met. I have never had a specific goal, just to give my best. At this moment, with my production company, I can finally dedicate myself to conceiving my projects and giving them shape. Until now I had been gifted with roles, and now I have the power to create them.

Is ballet sufficiently recognized in Spain?

The dance situation in this country is complicated. We are always several steps behind other countries. It’s a shame because the talent that Spanish dancers have is amazing. Many of them are references in the world. I think there is a lack of awareness and tradition. We should do a bit of self-criticism because it is very easy to blame the institutions, but the problem is that we do not support ourselves. There is a lot of individualism and little solidarity. We must understand that the time has come to unite because we need a voice to be able to have greater visibility.

Would this job be possible without passion?

Impossible. Passion is essential in a job like this. Because this is not a profession, it is a way of life. Being a dancer conditions your whole life. If you don’t really love what you do, it is very hard because it involves a great sacrifice. There has not been a single day in my life that I have wanted to dedicate myself to something else.

Does success weigh on growth?

It depends on each person because it is related to the ego. There is a huge difference between wanting to be a dancer to be famous or to be a star and wanting to do it because you love this profession.

Have you ever thought about retiring?

No, because I am still happy dancing and I feel capable of doing it the way I want. I have so much satisfaction that when the day comes when I don’t feel comfortable, I won’t have a problem saying up to here. At the moment it has not arrived, so I focus on enjoying.